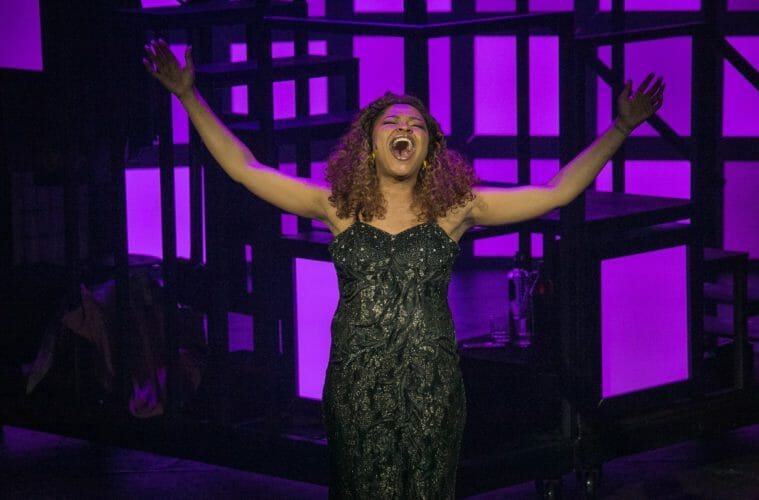 India S. Tyree boasts a big voice that fills the theater in the first act of “Song and Dance,” the Andrew Lloyd Webber musical at Aurora Theatre through September 12. (Photographs by Casey Gardner Ford)

The ’80s are back, or perhaps they never went away. We see it in the return of acid wash jeans, heavy blue eye shadow and neon-colored Spandex. We hear it in the way that artists are sampling the music of their parents’ youth — listen for Bobby Womack’s “If You Think You’re Lonely Now” in “Leave the Door Open” by Silk Sonic or Beyonce’s remake of “Before I Let Go” by Maze Featuring Frankie Beverly. However, not all things from the past translate so well to the present, and that’s the unfortunate case of Song and Dance at Aurora Theatre, in a limited engagement through September 12.

It’s not for lack of effort. The modern adaptation — complete with flat screen TVs that show text messages and Bumble matches — suffers from the disorienting dilemma of pertinent subject matter but dated score. Music technology has advanced so far beyond the tinny canned keyboard sounds that defined so much of ’80s pop that it’s hard to listen to now. 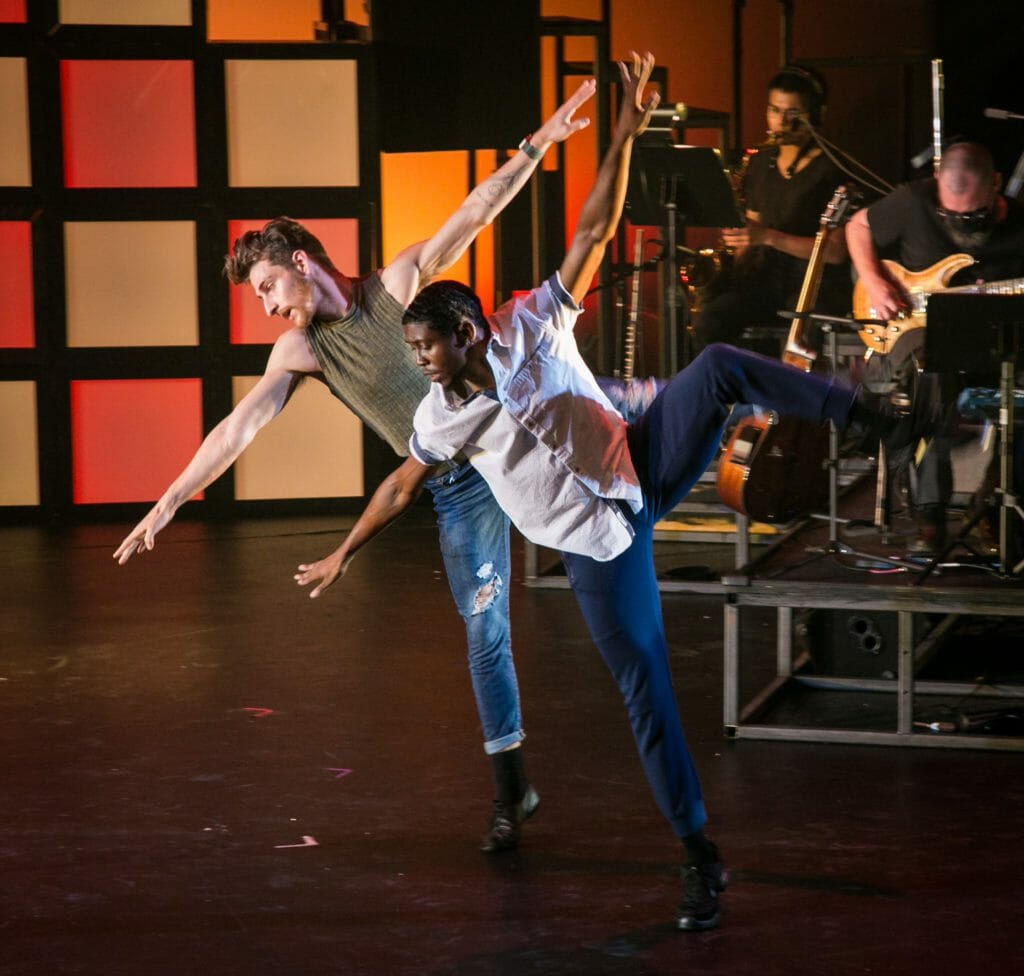 The musical is divided into two distinct acts. The “Song” act features a very ’80s score with music by Andrew Lloyd Webber and lyrics by Don Black. In it, a young woman has moved to New York from London to find love, but luck passes her by every time. In one instance, she flies to Beverly Hills only to be ghosted by a wealthy suitor in the witty jingle “Capped Teeth and Caesar Salad.” The “Dance” is mostly written for cello and in Aurora’s adaptation shows the tug-of-war of a woman torn between two admirers only using dance.

Song and Dance made its way to Broadway in 1985, starring Bernadette Peters in the first act, and played for 474 performances. It’s the type of musical that’s meant to showcase an artist, but not really tell a story. In the case of the original production, it was written for Webber’s cellist-brother and later enhanced by Peters’ big voice. 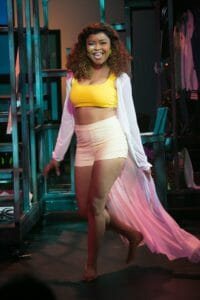 India S. Tyree is the star of a show “that’s meant to showcase an artist, but not really tell a story,” critic Kelundra Smith writes.

Aurora Theatre’s version stars the enormously talented India S. Tyree under the co-direction of Justin Anderson (Aurora’s The Bridges of Madison County and Les Misérables) and Lilliangina Quinones (On Your Feet! and In the Heights, also at Aurora). Tyree is a vocalist with a voice that fills the theater. She hits all the right notes and is supported by three background singers who are just as impressive. However, the jokes in the sung-through musical could use better punctuation. She goes from completely done with dating to gushing over a new beau from one moment to the next, such as in “Unexpected Song” and “Married Man,” and Tyree could afford to lean into the humor a bit more, both vocally and physically.

The set doesn’t do her any favors. The entire band is onstage and the setup is boxy and jagged with light scaffolding on the floor. The young woman’s apartment is represented by stairs that evoke the image of a New York City fire escape with props and costumes tucked underneath. The stairs offer her levels, but not much room to move, gush and dance. Though the Saturday Night Fever-esque light boxes upstage are a nice touch.

For the “Dance” act, Aurora enlists cellist Noah Johnson and choreographer Angela Harris, Dance Canvas’ executive artistic director, who also has choreographed 110 in the Shade and Bridges of Madison County at Aurora. Neither disappoint, and they infuse the dated score with renewed energy. The young, dynamic dancers that enliven the second act are gripping to watch and their passion is infectious. However, the love story in “Dance” is completely lost. “Song” and “Dance” feel less like two different ways of conveying the travails and triumphs of relationships and more like two different productions entirely.

“Why this play now?” is a question I often ask myself in the theater. In a time where there are so many new musicals and plays, why Song and Dance? Levity is certainly needed in our strife-filled times, and Song and Dance offers two hours of mindless fun. If fun is the goal, then Aurora Theatre’s production can afford to have more of it instead of being arrested by trying to convey dry British wit. Perhaps then it would justify taking this musical out of the ’80s along with wide belts and blousy tops.