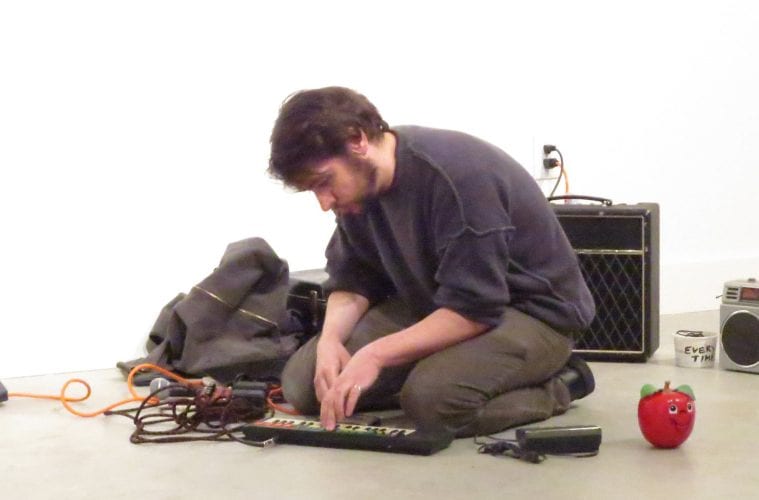 Blustery winds and bitter cold greeted the small cadre of people who ventured out to the Westside’s {Poem 88} gallery Wednesday evening to witness the sonic event Battery-Powered, Mono-Output. Designer, writer and musician Jon Ciliberto curated it, selecting six performers who were given the titular thematic limitations for a set of 15-minute improvisations.

The show opened with the only duo of the evening, Adam Babar and Frank Schultz. Babar is a guitarist and member of the experimental nonet Faun and a Pan Flute. Schultz plays lap steel guitar as the latter part of “Duet for Theremin and Lap Steel.” In this performance, Babar played a synth guitar while Schultz operated an optical controller — which Ciliberto later described as being essentially “a kind of optical theremin.” The rest of the lineup consisted of Robby Kee, Gage Gilmore, Lindsay Smith and Cedro Danado, all as solo performers.

Kee, who cocurates the monthly Invent Room Pop series at Beep Beep Gallery, was up next, utilizing playback from several small audio decks, including a variable speed one, for his ambient improv. Gage Gilmore — who plays with “damaged-pop” band deadCAT and free jazz / improv group Currency — followed, basing his improv around a pair of portable synth keyboards, which in part involved deconstructing several classical music “chestnuts” that come preprogrammed on the devices.

Smith, a bass clarinetist and guitarist with a hand in electronics and other instruments, worked her improv on the strings of an electric guitar and mandolin using a bow and an electric toothbrush. Someone quickly quipped that the bow was not battery-powered. Smith’s next scheduled performance is on Saturday at Eyedrum.

Danado closed the set; his setup included more variety in sound-producing objects, including what appeared to be a contemporary version of the classic Fischer-Price “Happy Apple” toy (the sturdy 1972 original is no longer manufactured), which incorporated a kind of internal metallophone that plays when the toy is moved or shaken.

In an email, Ciliberto explained his several motivations for curating this particular show: “First, I personally enjoy using small, battery-powered musical instruments. Second, I’ve noticed in the improvisatory (and composed) electronic music world that performers often have a table full of devices, but that at any moment the performer is really only able to ‘play’ directly one or two of them. Noticing the lack of physical engagement with instruments in such situations, I thought of the parameters of this music series as a way for performers on electronic instruments to remain physically involved.

“Third, {Poem 88} has big room reverb, and thus its acoustics work better with fewer and quieter, rather than more and louder instruments in play. Finally, I am curious to see how talented musicians interpret the ‘rules’ (1: must be battery-powered; 2: single mono output). They seem much more rigorous on the face than they actually are.”

It must be noted, however, that none of the performers employed the most salient and relevant aspect of a device being battery powered: portability — the ability of performer and device to be mobile. All established a small space of floor within which they remained while performing. Given that, they might as well have been tethered to power supplies plugged into electrical wall outlets.

One only has to consider the phenomenon of Phil Kline’s “Unsilent Night,” where audience, as performers, rove through city streets with boom boxes. But even if with solo or a few performers, battery-operated sound sources almost beg to be physically moved around a performance space, especially one like the bare, reverberant, quasi-cubic {Poem 88}.

That capacity is enhanced by the notion of “mono output” as an minimalist aesthetic requirement because it runs contrary to the mainstream of electronic music, where multiple fixed-position sound sources emulate the aural impression of sonic direction as a virtual phenomenon. Mono-output sound sources that move as the music is performed lies in stark contrast to that status quo.

After the conclusion of the five “Battery-Powered, Mono-Output” improvs, Ciliberto added one more event: a first-time run-through of his own composition for four analog sweep-dial radios. On a purely superficial level, it harked back to John Cage’s “Imaginary Landscape No. 4” for 12 radios, composed in 1951, almost two-thirds of a century ago.