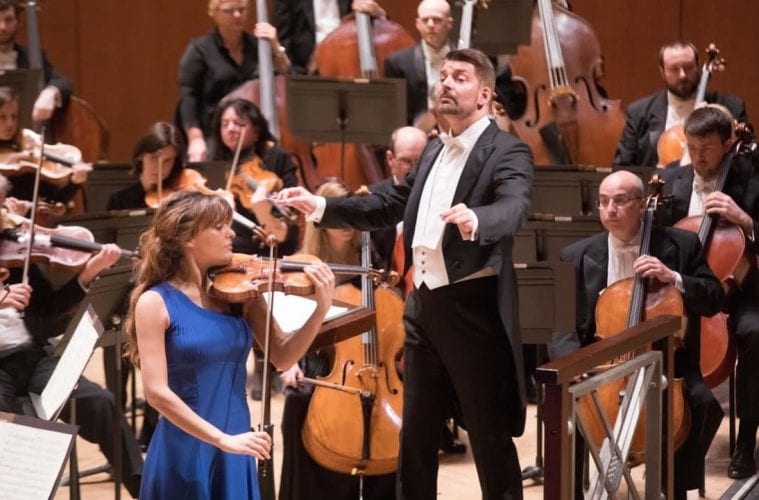 On Thursday evening at Symphony Hall, the Atlanta Symphony Orchestra performed a concert of music by Pintscher, Beethoven and Brahms, led by guest conductor Matthias Pintscher and featuring violinist Nicola Benedetti as guest soloist. The program will be repeated tonight (Friday) at the Falany Performing Arts Center at Reinhardt University in Waleska, Georgia, then again on Saturday evening at Symphony Hall.

Pintscher opened the concert with one of his own compositions, “Ex nihilo” — a Latin expression which means “out of nothing.” It is most often found in philosophy and theology in reference to creation of the universe, though it also has less cosmological, more mundane uses as well. It’s not the first time that the German-born, New York-based Pintscher has brought one of his own works to the ASO stage. He led a performance of his “Towards Osiris” in 2012.

Like Elliott Carter’s “Caténaires,” which pianist Conrad Tao played as an encore the previous week, “Ex nihilo” is a kind of contemporary music rarely heard on the ASO stage, despite the general championing of new music by the orchestra and music director Robert Spano. It is more representative of the mainline European approach to contemporary music, more akin to the “uptown Manhattan” approach of the United States than the kind of approachable “American eclecticism” that is so currently popular with orchestras who deign to touch non-pop music by living composers at all as part of their regular programming.

“Ex nihilo” is hardly unapproachable in its 12-minute duration. It is, however, the kind of contemporary music over which audiences and musicians alike tend to be strongly divided in opinion, the kind more or less imposed by academia in the 1970s and 1980s, to which most orchestral patrons of the time were extremely resistant. Yet, unlike a large body of the genre from those days, “Ex nihilo” — written in 2011 and premiered in January of the following year — does not come across as merely “knotty” or imposing, even with its musical language and use of extended techniques throughout the orchestra.

True to its title, “Ex nihilo” grows gradually in energy from spare textures to its near-end climax, and Pintscher’s creative handling of the orchestration (which includes the low-end rumble of rarely heard contrabass clarinet) is colorful but remains spacious rather than crowded in its sonic tapestry, even at its loudest point. Unless you’re in the camp that despises this genre of music from the get-go, this variety of uptown modernism is a refreshing change of pace. 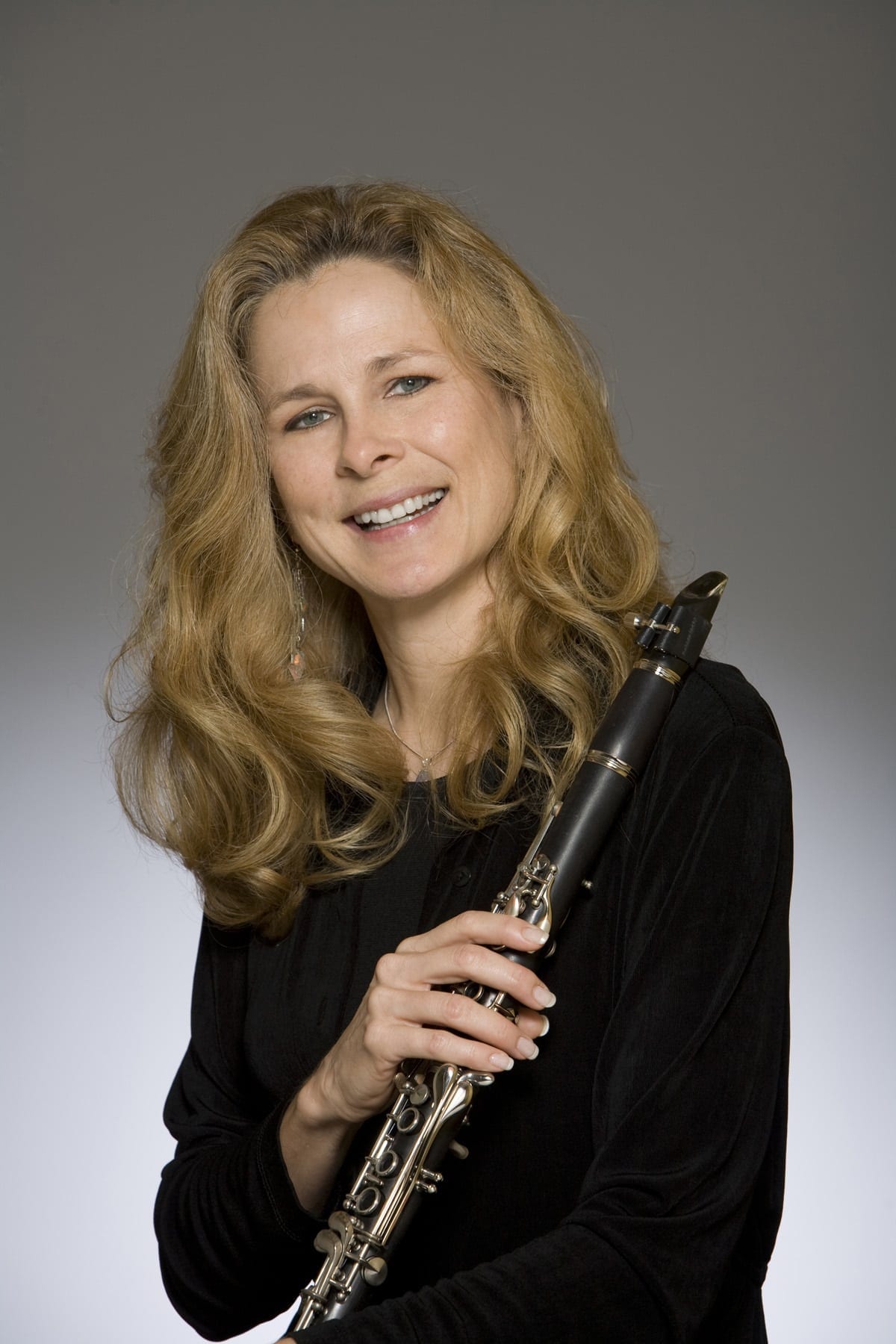 Laura Ardan was honored after intermission. (Photo by J.D. Scott)

Next up, Scottish violinist Nicola Benedetti took the stage to play a monument of far more familiar traditional fare: the Violin Concerto in D major, Op. 61, by Ludwig van Beethoven.

The lithe Benedetti was not at all willowy in her playing, which was assertive with a strong sonic presence against the orchestra. There was an underlying energy in the music’s softest and most lyrical passages, almost as if she were hoping for more notes to play than the score afforded. In at least one sense, she got them in the first movement’s cadenza — an unusual one which I had not previously experienced, and perhaps most in the audience had not either — a cadenza created by German violinist Christian Tetzlaff, based upon Beethoven’s own cadenza for the same concerto transcribed for piano in which Beethoven expands on the movement’s “military march” theme. Tetzlaff created a shorter version for violin because he found Beethoven’s cadenza to be more closely tied to the music than more commonly heard cadenzas — such as that of Fritz Kreisler — which veer over into more romantic fancy than the composer’s own musical language would imply.

Beyond that transcription from violin to piano and back to violin again, the most unusual and identifying element of the Beethoven-Tetzlaff hybrid cadenza is the incorporation of a relentless part for timpani. Beethoven used it in his piano-version cadenza, and Tetzlaff kept it in his re-transcription. It posed a challenge for ASO principal timpanist Mark Yancich, not because of any difficulty of the part itself, but because of the distance between his position at the back of the stage and that of Benedetti at the front. On the one hand, the violin soloist needs the at-the-moment flexibility of expression that comes with a cadenza, and yet the timpanist, across that distance from the front to the back of the unusually expansive Symphony Hall stage, has to be right there with her in timing in their back-and-forth exchange. In this particular performance, it came across as a delightfully tight duo between Benedetti and Yancich, adding to the movement’s overall excitement as well as the front-edge energy that marked the entire concerto.

After intermission, before the final music, ASO executive director Jennifer Barlament took the stage to announce and acknowledge ASO principal clarinetist Laura Ardan as the recipient of the Mabel Dorn Reeder Honorary Chair, which ArtsATL first reported in late March. The five-year award is a gift from the Mabel Dorn Reeder Foundation, given to a member of the ASO who demonstrates excellence in musical artistry, leadership, collegiality and community engagement. As part of the award, Ardan also receives a one-time stipend for the purpose of professional development.

The program then concluded with Symphony No. 2 of Johannes Brahms. Pintscher and the ASO gave the piece a fulsome performance akin in character to the Beethoven concerto, though it could have lightened up a little at times in its more buoyant moments. Still, it seemed an exceptionally satisfying performance of the work and rounding-out of the night’s program.

Prior to the orchestral concert, at 6:45 p.m., came one of the ASO’s Thursday chamber recitals. Originally scheduled was the Septet in E-flat Major, Op. 20 by Beethoven, but associate concertmaster Justin Bruns — who was to play the violin part — came down with bursitis and is under doctor’s instructions to take a couple of weeks’ rest from playing. That necessitated a last-minute consideration as to whether to cancel the preconcert recital outright. But concertmaster David Coucheron and pianist William Ransom stepped in to perform Beethoven’s “Kreutzer Sonata” (Violin Sonata No. 9), as they had already prepared it for a Friday afternoon concert at the Michael C. Carlos Museum.

The “Kreutzer Sonata” could easily be called Beethoven’s “other violin concerto” in the sense of its unusual length — some 40 minutes — and emotional range, with both parts very demanding on the respective performers. Coucheron and Ransom pulled off a brilliant, energized performance of the well-known work.