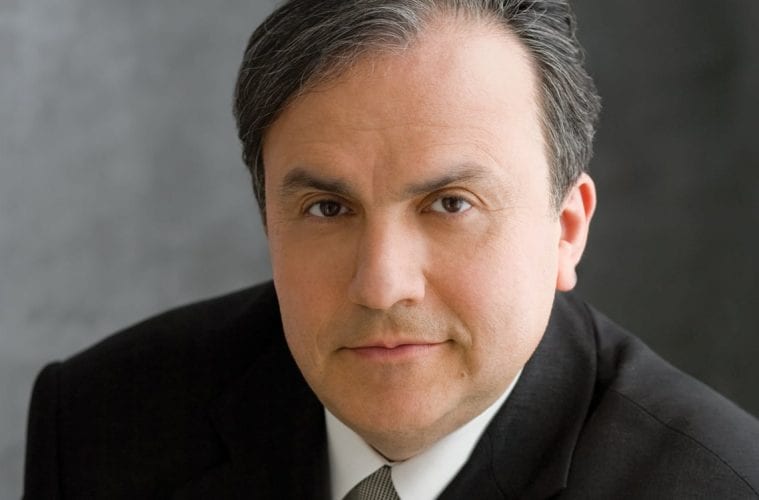 Yefim Bronfman had his piano retuned during intermission.

Ten years ago, on February 1, 2003, Emory University’s Donna and Marvin Schwartz Center for Performing Arts made its debut. It had already been a dozen years since 400-seat Spivey Hall opened on the campus of what is now Clayton State Universty, bringing the idea of a performance-specific hall with enviable world-class acoustics to the attention of Atlanta’s cultural elite. This was in contrast to the “civic” idea of a multi-use, “one size fits all” auditorium that was the common practice, with most architects essentially treating acoustics as an unfathomable form of witchcraft.

Plans for the $36 million Schwartz Center, thankfully, made acoustics a top priority for its Emerson Concert Hall, a “shoebox” design twice the size of Spivey, with a stage and capacity capable of presenting large ensembles. Architect Michael Dennis of Boston and Chicago-based acousticians Larry Kierkegaard & Associates collaborated on the Schwartz design. It was one of eight buildings in Emory’s 1997 “master plan” and the first completely new one on the campus since Glenn Memorial United Methodist Church was completed in 1931.

“The campus has taken on more of an arts persona,” said composer Steven Everett, chairman of Emory’s music department, at the time. (Everett is now, among his other courses, teaching Introduction to Digital Sound Design as one of Emory’s three “new massive open online courses” via the pioneering Cousera website.) History has confirmed Everett’s prophecy. The Schwartz Center has become the most conspicuous face of Emory’s “arts village” and not only has allowed for greater visibility for the arts on campus and in the larger community, but has greatly enhanced the university’s ability to collaborate with local and national artists and organizations.

That was spelled out well on Satrurday night, when the Schwartz presented pianist Yefim Bronfman in recital, almost 10 years to the day after the center’s celebratory opening concert. Familiarly known to friends and fans as “Fima,” Bronfman played an engaging program of music by Schumann, Brahms, Salonen and Prokofief, with a pair of Chopin’s etudes as encores.

The recital opened with Robert Schumann’s “Arabeske in C Major,” one of the composer’s early opuses for solo piano. It was the most intimate, inward-looking piece of the evening; Bronfman played it with a remarkable delicacy and elegance of tone. The Sonata No. 3 by Johannes Brahms, also an early opus in that composer’s catalog, contrasted with the Schumann as a work with more dynamic range, which gave Bronfman the chance to demonstrate his capacity for powerful playing, really digging into the keyboard.

During intermission, the piano received a great deal of attention from the piano technician for retuning. Perhaps this was the result of the Brahms sonata, but it seemed that the piano itself sounded much better after intermission.

That benefited the performance of “Sisar” by Esa-Pekka Salonen, which Bronfman had premiered only three days before in the Los  Angeles Philharmonic’s Colburn Celebrity Recitals series at Walt Disney Concert Hall. The work was commissioned by the L.A. Philharmonic, thanks to the Rauch Family Foundation. Attractive and accessible, “Sisar” opens with rapidly cascading figures which then are contrasted with passages of syncopated rhythms, its ending quickly fading in a swirl. According to the composer, the title carries the double meaning of “sister” in Finnish and “to filch” in Spanish, because he pilfered material from his orchestral piece “Nyx,” which he thinks of as this new piano work’s “big sister.”

By far the high point of the evening, however, was the Sonata No. 8 of Sergei Prokofiev, the third of his “War Sonatas,” written during World War II. It is a large, virtuosic and exceptionally well-crafted work.  Bronfman’s performance was no less than technically and musically impressive.

Most curiously, both the Brahms and Prokofiev sonatas were performed by Bronfman when he made his Spivey Hall debut last March. (A member of the audience was overheard to suggest that Bronfman had also played the same Chopin etudes as encores in that performance, something not independently verified as of this writing.) The reason for this replication of programming by a major artist in the same market, within less than a year, is unclear. But for those who missed the Spivey performance that mattered not; for those who did attend it, this was an opportunity to revisit Bronfman’s renditions under different circumstances.