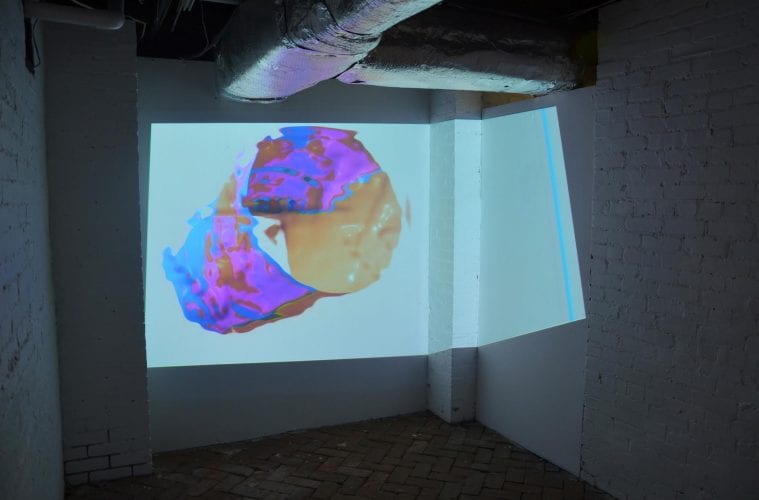 “Phygital Muse,” Bojana Ginn’s exhibition at Whitespec through December 31, deals in difficult but timely subject matter — the union of physical and digital realms. Ginn studied medicine before turning to art, and her work is driven by transhumanism — too simply described here as the discourse of how the human body is affected by technological advances. In her statement, Ginn positions herself outside the ethics of the field. Yet, to me her work and language lean optimistic, showcasing the aesthetic appeal of the technologically enhanced body and the promises it entails. 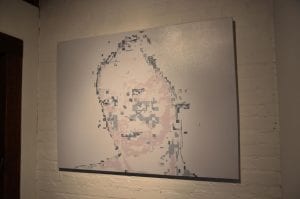 The most conventionally made object of the show, Digital Madonna is an oil painting of a woman, whose face seems to be dissolving into blocky, pixelated form. She is an appropriation, her soft features borrowed from Leonardo da Vinci’s depictions of the Virgin. The portrait also engages the notion of the female muse — a familiar and dangerous trope of Western art from the Renaissance forward. The painting is strategically placed so that it is the first object one sees when entering Whitspec. It poses many questions: is this the demise of the objectification of women, mournful nod to oil painting’s displaced status, or something else entirely?

Of course, thus far I’ve taken the glass-half-empty approach. Digital Madonna could just as easily be in the process of formation — a birth or rebirth, not a death. Indeed, though she is citing the past, Ginn borrows from a beloved Renaissance painter known for his comfort mingling science with art. Perhaps Ginn is reminding us of art’s long-standing engagement with these other fields and the positive potential for a renewed intermingling.

Virtual Transplant is a looping video projected into a corner of the gallery’s whitewashed brick walls. Its texture is uneven and the screen imperfectly akimbo. It’s a simple gesture, but it smartly distances her from the ubiquitous and boring conventions of the rectilinear composition of the Western tradition. The video is short and shows a multicolored cylinder gliding from the upper left to the lower right corner. It’s in constant flux, but one of the most compelling moments is when a peachy, fleshy portion of the cylinder is activated by moving, cyst-like formations — oddly beautiful.

Opposite Virtual Transplant, E-Synesthesia is an installation that shares qualities with Virtual Transplant. A projection is cast through a crinkled sheet of transparent, paint-splattered sheet of plastic suspended from the ceiling. Fuzzy balls of pastel pink and blue make a gradient on a sheet on the floor. It is a multimedia work that defies easy description and analysis, but given its title, it suggest the way that a digital stimulus might kindle a physical reaction or vice versa, just as in traditional synesthesia, one sense stimulates another. The use of pink and blue have gendered connotations as well.

One test of a good show is this: without reading the statement, can I approximate what the artist means? To me, Ginn passes while thankfully veering away from overtly literal, illustrative, or didactic treatment of her subject. Yet, there are certainly deeper implications, especially as they pertain to one of the underlying themes of the small show, gender. Fans of Donna Haraway’s writings about the feminist potential “unnatural” technological modifications of the body might read this an empowering and utopian exhibition.