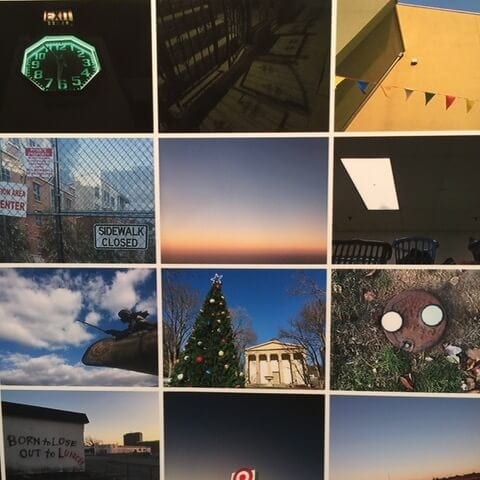 A view of some of Phillip March Jones' photographs at Poem 88. (All photos courtesy the artist/Poem 88.)

Phillip March Jones’ Pictures Take You Places, on view at Poem 88 through December 2, is a visual experiment on the practice of photography. Since June 10, 2011, Jones has been taking one picture a day. The current installation showcases more than 2,200 of these images organized chronologically on two walls of the gallery. Jones does not pretend to show the extraordinary or the spectacular, but he instead presents us with a visual framework of his everyday life with both its banalities and its rare moments.

A native of Lexington, Kentucky, where he founded the nonprofit contemporary art space Institute 193, Jones became the primary director of the Souls Grown Deep Foundation in Atlanta in 2011. He is currently the director of the Andrew Edlin Gallery in New York City and fully engaged in the art world in Europe and the US. This professional life has left him with little time to practice art, thus sparking the idea to challenge himself with the production of a visual diary.

Like most of us, he photographs his immediate surroundings, creating a narrative of his personal life along the way. But unlike most, he conceived his project with the intention that it would become a disciplined lifetime affair, meant to be continued ad infinitum. Jones initially organized his photos on Tumblr then shared them on social media platforms such as Instagram. The rapidly growing number of images led him to seek another way to share them.

In 2014, he turned his project into a collection of 52 full-color postcards with the help of his friend Robin Bernat of Poem 88 and her publishing arm, EDITIONS. With this exhibition, Jones returned to the gallery, but this time he created a mosaic of photographs, with each image measuring 3.5” by 4.75”. In addition to the walls of printed images, the gallery features an updating screen displaying an image of Jones’ current daily photograph.

The pictures are, for the most part, of things that Jones stumbled across. Funny signs, orange cones on the street, interesting shapes and bad landscaping. He says that since he moved to New York, he mostly photographs trash on the street: a white cup left on top of a fence, a wall filled with graffiti, a salad bowl abandoned on the curb.

Jones has an uncanny eye and a humorous way of taking the banal and turning it into something worth looking at. Faced with so much information, viewers are naturally tempted to look for recurring patterns (again, the orange cones) or similarities in framing the shot and picking color schemes.

Interestingly, few people enter Jones’ viewfinder. Most photographs are about places and things. “It’s not that I am insensitive to people,” Jones says. “I just have a lack of visual interest for people.”

The installation reads like a cabinet of curiosities, where the viewer is observing the microcosm of an inquiring mind. His practice is reminiscent of the way the surrealist movement approached art making, by emancipating the artists from being too conscious about their process. But in all truth, not all parts merit attention. Jones admits himself that some photographs are genuinely not strong and could have been left out.

What interests Jones is not so much curating his photographs but rather engaging with the photographic act to create a process rather than a result. In the end, Pictures Take You Places is first and foremost a personal project that was designed around a strict discipline and with a definite aesthetic approach. Conceived as an immersive environment, the installation remains seductive in its concept albeit somehow disorienting for the viewer due to the massive amount of visual information to digest.