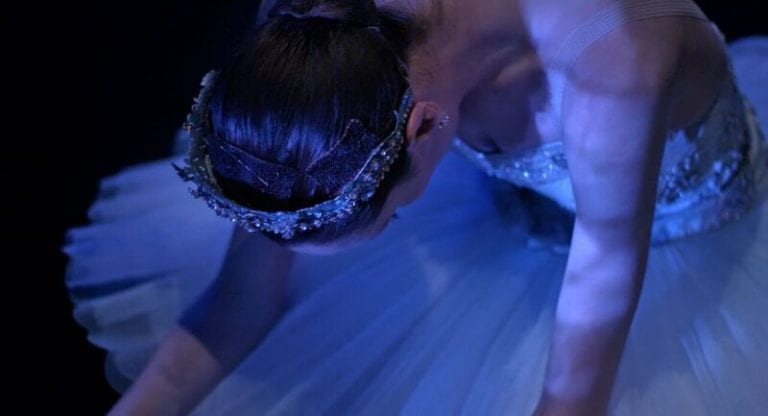 A dancer in the Paris Opera ballet corps catches her breath backstage in a scene from director Jean-Stéphane Bron’s new documentary The Paris Opera. The film opens November 10 in Atlanta. (Photo courtesy of Film Movement.)

The Paris Opera. Swiss director Jean-Stephane Bron’s new documentary goes behind the scenes for a season at one of the world’s most iconic art institutions. Opens November 10. Landmark Midtown Art Cinema.

Men of Bronze. A documentary film traces the stories of black American soldiers of the 369th US Infantry Regiment, known as the “Harlem Hellfighters,” who served with the French army in World War I. A panel discussion with military veterans follows the screening. November 15 at 6:30 p.m. Jones Room, Woodruff Library, Emory University.

Casablanca. Turner Classic Movies hosts screenings of the classic 1942 film starring Humphrey Bogart and Ingrid Bergman at cinemas across the country in honor of the movie’s 75th anniversary. November 12 and 15. Area movie theaters.

Jessica Caldas: Infringed. Twin Radius presents a new multimedia installation from the Atlanta-based artist that addresses the history of the second amendment, gun control and violence in the US. Opening Saturday, November 11, at 6 p.m. Exhibition through January 12. CenterForm.

Louis Prima Jr. The trumpeter, son of the great Louis Prima, performs a concert backed by his band and supported by vocalist Gwen Hughes. November 14 at 8 p.m. City Winery.

James Armstrong. With his engaging songs and old-school guitar lines, Armstrong is one of the strongest of the new generation blues artists who are keeping the flame alive. He is touring behind a terrific new album, Blues Been Good To Me. November 10 at 9 p.m. Blind Willie’s.

Bach Under the Stars. The Emory Chamber Music Society of Atlanta presents members of the Vega String Quartet performing Bach’s works for solo strings under the stars of the Emory Planetarium, with commentary by astrophysicist and planetarium director Erin Bonning. November 10 at 7 and 9 p.m. Emory Planetarium.

Cardboard Piano. Actor’s Express presents the Atlanta premiere of Hansol Jung’s new play about a pair of girls who hold a makeshift wedding in northern Uganda which is interrupted by the arrival of conflict and war. November 11–December 3. Actor’s Express.

Arden of Faversham. Resurgens Theatre presents an original practice production of the 1592 Elizabethan play depicting the real-life murder of Thomas Arden by his wife Alice Arden and her lover, and their subsequent discovery and punishment. November 13–17. Shakespeare Tavern.

Isabel Allende, In the Midst of Winter. ArtsATL critic Gail O’Neill speaks with the acclaimed author about her latest novel. November 16 at 7 p.m. Atlanta History Center.