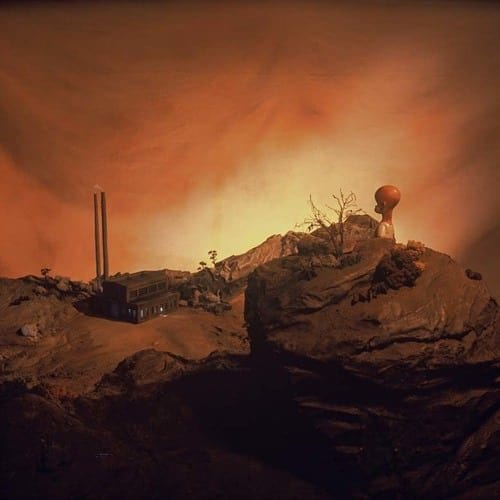 Peter Bahouth’s Birth of a Red Planet, at Hagedorn Foundation Gallery through January 10, is one of the more innovatively celebratory exhibitions of photography to occur in Atlanta in 2014.

The Atlanta artist, known for his stereoscopic photography, has created his first stereoscopic narrative, a social-commentary sci-fi story mimicking the seven-image limits of the View-Master science fiction tales of the 1950s.

Reflecting on the dimensions of our present planetary crisis and on his years of guiding the direction of environmentally focused organizations, Bahouth imagined a story in which a little boy named Henry (depicted by a 1950s doll based on a comic strip of that name) sees that his own world is “a planet . . . grown increasingly inhospitable and dangerous” and decides to seek out a different world in outer space.

As the wall text summarizing the story puts it, Henry’s spaceship eventually makes “a terrifying landing” on “a new planet . . . one that holds the promise of sanctuary, hope and renewal” — a place populated by a robot who adapts to the arrival of this refugee/immigrant. Bahouth doesn’t describe Henry in those terms, but he does provide another block of wall text that sets the theoretical parameters for this 21st-century space epic: “In contrast to the colonialist implications of space-related images from the 1950’s and 60’s, Birth of a Red Planet and the story of Henry suggest the interplay between hope and crisis . . . He seeks safety from a dystopian world, and his fate is the embodiment of a utopian consciousness.”

That is, however, all the verbally expressed theory we get in this decidedly analog adventure, created with film photography and hand-built sets without a shred of digital manipulation involved. Three of the spectacular dioramas, constructed by sculptor Nikki Starz using toys of that era, are on display in the gallery, which is bathed in red light and space-age music. They demonstrate the depth and difficulty of this immense collaborative venture, in which Starz created sculptural environments to fulfill Bahouth’s ambitious intentions.

Everything else has to be gleaned from the details of the images seen through seven stereoscopic viewers, plus two portrait-head photos of Henry and the robot and another set of three archival pigment prints that concludes with an idealistic photo depicting Henry in the lushly green setting of his new world.

As that chlorophyll-suffused adjective implies, the red planet coming to birth in Bahouth’s title is not Mars but a dried-up and devastated Earth. The new planet depicted in Birth of a Red Planet #7: Henry Finds a Safe Place is an Edenic garden in which Henry and the robot (also played by a 1950s toy, a robot named Zoomer) sit side by side in a space-age update of Edward Hicks’ Peaceable Kingdom. As Bahouth openly states, this mash-up of 1950s innocence and circa-2015 experience is meant to reawaken the notion that another world is possible, not in the reaches of space but right here on Earth. To this end, he has created a low-tech homage to reaches of imagination associated with the highest of technologies, and implies that a new world is within reach even if it requires a little child to lead us.

Bahouth is playing with children’s toys to resolve thoroughly grown-up dilemmas. How far his model can carry us is suggested by the level of engagement displayed by fascinated viewers. The exhibit contains visual information that almost everyone can get, and get with or get behind.

He uses a naive-seeming older form of popular culture to reach beyond to even older symbols of transformation, and he encourages us to work with those symbols to attain what the philosopher Paul Ricoeur called a second naiveté: the deep emotional involvement that is necessary to spur us to reflective action in the physical world.