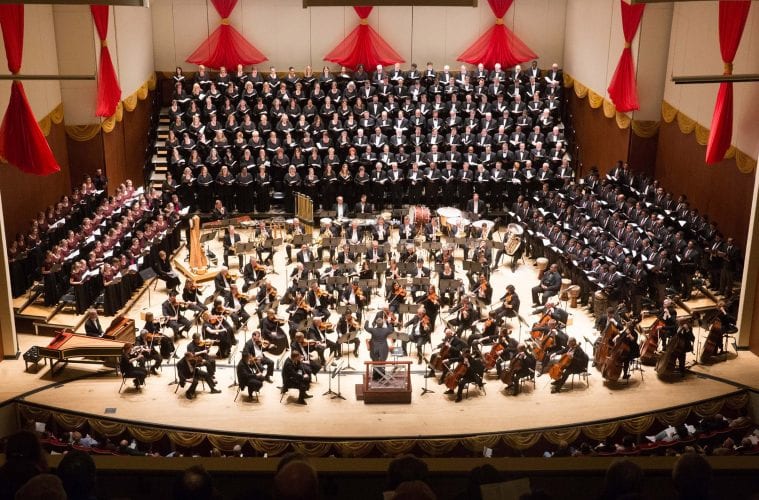 Preview: ASO Christmas program draws on the past as it carries the Robert Shaw legacy forward The Christmas shows have been an Atlanta tradition since the 1970s. (Photo by Jeff Roffman)

The Atlanta Symphony Orchestra and Chorus will perform their iconic “Christmas with the ASO” concert Thursday at 8 p.m. and twice on Saturday, at 2 p.m. and 8 p.m. Led by ASO director of choruses Norman Mackenzie, the concert also features the Morehouse College Glee Club, the Gwinnett Young Singers and tenor soloist Russell Thomas, this season’s artist in residence at the ASO.

The roots of “Christmas with the ASO” go as far back as Robert Shaw’s 15-minute radio broadcasts for CBS from New York in the 1940s, and today’s format follows the same dramatic architecture Shaw built upon since the 1970s — a tightly woven 80 minutes of mostly serious Christmas and classical repertoire. Although some musical selections change slightly from year to year, it has essentially persisted for over 40 years and is a holiday event that is quintessentially Atlanta.

“Robert Shaw used to say it’s like decorating a Christmas tree,” says Mackenzie. “You’ve got the basic skeleton of the tree. You have the ornaments on the tree that you couldn’t live without every year. But you also want to place a few new things or bring up something you haven’t used for 15 years and put it on the tree. And I think that’s a perfect analogy.”

The show’s dramatic arc is deployed in four parts: “Prophecy and Advent,” “The Stable,” “Around the Christmas Tree” and “Adoration.” Although it involves the Christian Nativity story, it’s much more than that, also referencing our celebrations of Christmas in a secular way and as a culture in American society.

The program is also indicative of Shaw’s vision for the arts in Atlanta and what they should accomplish. He felt it should be intergenerational, so he included a children’s choir. He also thought it could be reflective of Atlanta’s diverse population, so he invited his friend Wendell Whalum and the Morehouse College Glee Club to participate — and in those early days, that was a pioneering move.

But there are times when a city’s great traditions can feel threatened. Even the chorus itself. With the death of Shaw in 1999, the chorus found itself at a serious turning point, some wondering whether it could continue absent its father figure. “It became obvious to many of us at the very first rehearsal after Shaw’s moving memorial concert that we had to take the precious gift that had been given us, nurture it, enhance it and preserve it for future generations,” says Mackenzie.

Then in 2001, when Robert Spano and Donald Runnicles came to the ASO as music director and principal guest conductor respectively, Mackenzie became convinced that with both of them, the chorus would be well positioned to move that goal forward. In the ensuing years, the chorus has grown and evolved. It has become enormously flexible and more responsive to multiple conductors, occasionally moving outside its comfort zone with artistically gratifying results.

“He knew well this could be a life-changing experience for these singers, for their partners in the orchestra and their audiences,” says Mackenzie. “He often said that great art was not ‘the luxury of the few’ but an essential component of all human existence. He set out to prove that on a large scale in Atlanta.”

As for the future, Mackenzie firmly believes the celebration of the Robert Shaw Centenary during the 2015–16 season will once again prove a pivotal moment for the chorus and orchestra. The real question, then, will be how to continue building upon and reinventing this legacy in ways that advance a passionately creative, visionary model for sustaining world-class art and music in Atlanta within a challenging culture and economy. “That’s a conversation I can’t wait to have,” he says, “and I believe that the ASOC can and will be a vital and energetic part of that exciting journey.”

In the meantime, if only for this week, Atlanta can celebrate in the spirit of the season with a concert that — in its broad philosophical concept, its integrity, diversity, intergenerational nature and its wide variety of musical styles — says something special about our city’s cultural past, present and future.