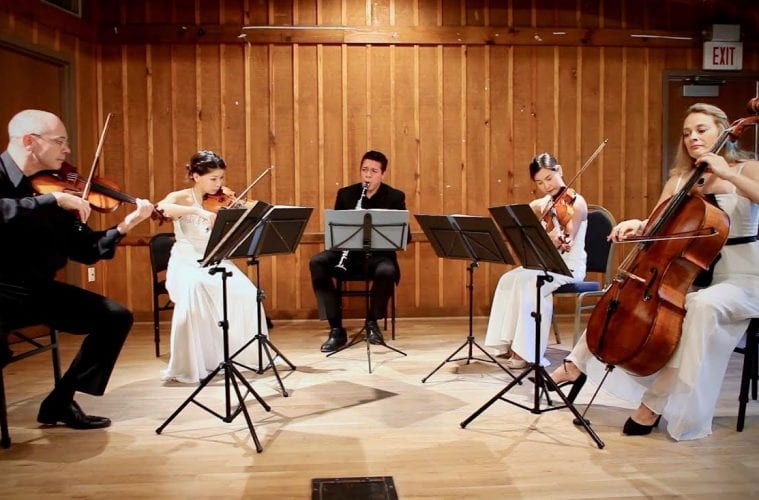 A cool but sunny autumn afternoon is a great time to be outdoors, or at a chamber music concert in a semi-rustic building with a good view of the surrounding woods and seasonal leaf colors creating a relaxed setting for the performance. This was the setting for the Peachtree String Quartet’s 2018–19 season opening concert on Sunday at its home venue, the intimate and relaxed Garden Hills Recreation Center, featuring a program of music by Schubert, Shostakovich and Mozart.

Now in its seventh season, Peachtree String Quartet has firmly established its niche in Atlanta’s chamber music community, even as it has experienced a few changes in personnel, temporary and permanent. The quartet’s current roster consists of violinist and artistic director Christopher Pulgram, violinist Sissi Yuqing Zhang, violist Yang-Yoon Kim and cellist Charae Krueger. Sunday’s concert was also the first time ever the quartet has included a guest artist: clarinetist Alcides Rodriguez. Pulgram, Zhang, Kim and Rodriguez are all members of the Atlanta Symphony Orchestra; Krueger is principal cellist of the Atlanta Opera Orchestra and the Atlanta Ballet Orchestra.

Sunday’s concert opened with Franz Schubert’s “Quartettsatz,” a singular 10-minute movement for string quartet from 1820 that somehow never became part of a larger, multi-movement work. It is nonetheless an imaginative, fiercely alive piece that stands well on its own, and proved a convincing opener for the group. It was paired on the program’s first half with Dmitri Shostakovich’s String Quartet No. 7 in F-sharp minor, Op. 108. Written in 1960 in memory of his first wife, it is not much longer than the “Quartettsatz,” clocking in at a mere 13 minutes for its three movements, performed without pause.

The work is sparsely scored in many places, in particular the opening movement, and though it did not raise a truly fortissimo turmoil until the final movement, it was chock full of Shostakovich’s penchant for dark and spiky wit within its predominant mood of brooding rumination.

The anticipated apex of the afternoon came when Rodriguez joined the quartet for W. A. Mozart’s superb Clarinet Quintet in A major, K. 581. Written in 1789 for the esteemed Viennese clarinetist Anton Stadler, it is one of the two great pillars of the genre, the other being Johannes Brahms’ Clarinet Quintet. The performance by the five musicians was as cheerful as the afternoon sun that beckoned through the trees outside.

The most intriguing piece on the program turned out to be the encore: “Vanishing Borders” by Ricardo Lorenz, which was commissioned by Peachtree String Quartet to be premiered by them and Rodriguez. It was composed with material from Lorenz’ film score to the 2014 documentary Vanishing Borders, written and directed by Alexandra Hidalgo, which tells the story of four immigrant women living in New York City who, through their work, relationships and activism, transform their lives and the lives of those around them.

The connection between Rodriguez and Lorenz is close, including a mutual Venezuelan American national heritage. Atlanta audiences heard Rodriguez, who is an expert player of maracas as well as clarinet, perform as soloist in the Chicago-based composer’s Concerto for Maracas (“Pataruco”) last March with the Atlanta Symphony Orchestra.

It’s no wonder, then, to see Lorenz and Rodriguez collaborate again, this time in a chamber work that is a truly welcome addition to available repertoire for clarinet and string quartet. The five musicians actually gave “Vanishing Borders” its premiere during a private outreach concert for the Lenbrook senior community the previous Wednesday, but along with the well-thought-out balance of the program, the group did itself proud to include this new work as an attractive capstone to Sunday’s afternoon outing.