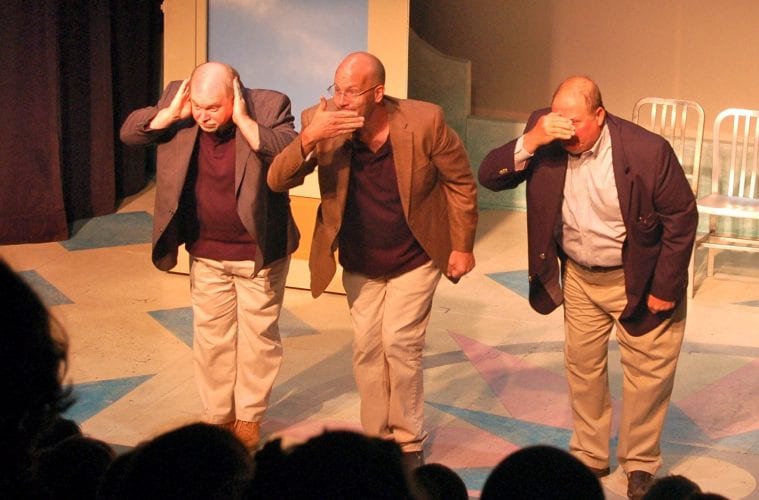 There's certainly no evil lurking at the One-Minute Play Festival.

The story goes (and some claim it’s apocryphal) that Ernest Hemingway once won a bet at the Algonquin Round Table by writing a short story in six words: “For sale: baby shoes, never worn.”

True or not, the anecdote proves that brevity can have dramatic impact, and the story itself could be the unofficial motto for the One-Minute Play Festival, an offbeat experiment that started in New York and has spread to other cities. Now it’s Atlanta’s turn, last night and tonight, at Actor’s Express.

About 30 Atlanta playwrights, famous and un-, were asked to pen plays that last a minute or less. About 70 actors whip through them, barely taking a breath. The logistics alone are impressive, and everybody works for free. It’s fun, random, as uneven as you can imagine, and certainly not boring.

Topics include gay marriage, a severed head, aging, awkward dates and the inescapable pull of “Jersey Shore.” The most common theme is people who are more devoted to their electronic screens (smart phone, iPad, whatever) than to the real people they’re with — maybe not something you could write a whole play about, but certainly worth a pithy little jab.

A lot of the plays are more like quick jokes: set-up, punchline, move on. As a rough rule, the funny ones work better than the serious ones, because it’s clear what your response is supposed to be. Some are mini-monologues, others are cryptic and leave you hungry to know more, such as Pamela Turner’s creepy “Girl Washing,” about a man giving a woman (a young girl?) a bath.

The most memorable ones manage, like Hemingway, to tell a tidy little story. Murray’s “Congratulations!” is a bitter take on how companies downsize people these days, with lots of details packed into a brief span. In Lee’s “Date Night,” an abused woman gets ready to go out with her husband, and the past abuse is obvious but never mentioned; several people in the audience softly said “whew!” when that one was over.

Several Atlanta playwrights and actors who are participating share their thoughts on the festival’s blog.