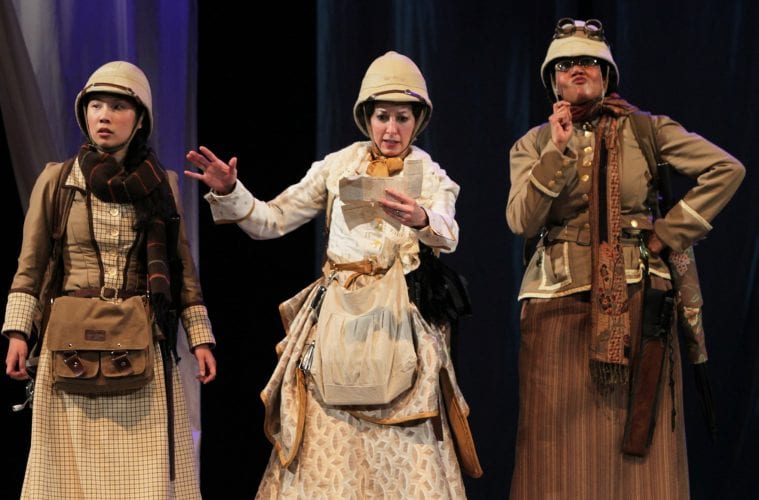 Review: “On The Verge” offers a dose of the right medicine for the importance of theater

The current cultural temperature is neither pleasant nor charming, but for those who long to see a fine show that has nothing to do with anything on the news, I certainly hear you and I have one I can recommend. Eric Overmyer’s pleasant, charming 1985 play On the Verge, or The Geography of Yearning is getting a pleasant, charming production at Georgia Ensemble Theatre through November 20.

Overmyer’s play premiered Off-Broadway in 1985. It was an unexpected minor hit, and though it’s never entered the cultural conversation in a huge way, the lovely, gentle play continues to be performed off and on at theaters around the country (Overmyer went on to write for such acclaimed shows as St. Elsewhere, The Wire, Law & Order and Treme). It’s not a play of hugely monumental ambitions, but it has a singularly successful, loopy appeal that’s entirely its own.

On the Verge tells the story of three late 19th-century female explorers, who, as the play opens, are setting off to travel through the last unexplored territory in the world, Terra Incognita, somewhere off the coast of Peru. The action takes place on a nearly bare stage, and as the three winningly witty and independent-minded women delve deeper into unknown territory, they begin to encounter stranger and stranger things. Objects from the future — egg beaters and campaign buttons — confound them, and through some form of osmosis, they absorb strange inklings of 20th-century culture, pop songs and slang. Strangest of all, they encounter bizarre natives: a baby yeti, a bridge troll, Mr. Coffee, a fortune teller and a seductive lounge singer named Nicky Paradise among them.

Atlanta actress Park Krausen is perfect as the lead explorer Fanny. She has a compellingly likeable stage presence paired with an emotional legibility that’s a great fit for a play where the narrative landscape is so surreal. Michelle Pokopac and Keena Redding Hunt follow suit as her two fellow explorers, Alexandra and Mary. The remaining roles — most of them exceedingly bizarre — are performed, as per the play’s design, by a single actor, in this case Atlanta playwright Topher Payne. As those familiar with Payne’s work might expect, he dives headfirst into the play’s zany sensibility, giving each of the character roles its own unique energy.

On the Verge is not a monumentally significant play, but it’s a decent one, and it’s one of the strongest productions I’ve seen at the Roswell-based theater. It’s certainly among its most artistically risky.

Sadly, the theater positively hemorrhaged patrons during intermission at a recent Sunday afternoon performance, a troubling occurrence at such a fine production. “Tastes differ,” I thought to myself as I witnessed the older, white, suburban audience leaving in droves, and that is probably true: tastes differ. It’s an unusual play, and not everyone will love it. But my mind was also troubled by this abandonment, the fact that the play focuses on independent, driven, intellectually curious women, played here by a racially diverse cast. It asks its audience to make unusual, but hardly Herculean leaps of imagination and compassion, and in the end this may have been too much to ask of the departing audience members. Still, it was heartening that more people remained than left, and those who stayed seemed to really dig it.

These are strange and scary times, and it will be easy to slip into paralysis and isolation. Monumental work can begin with the tiniest of tasks, so may I suggest one? Support local theater. Support plays about strong and independent women. Support artists that take the risk of trying to push audiences forward. And for goodness’ sake, support anyone who does the crucial work of trying to call our departing neighbors back into the realms of beauty, imagination and compassion.