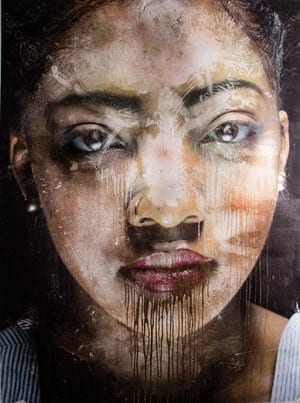 Michael, Oscar, Sandra, Eric, Freddie, Philando, Keith, Tamir, Rekia — all of these people were killed as a result of police brutality and all of their names became trending topics on social media. Leveraging the power of “Black Twitter,” and the hashtag #BlackLivesMatter, frustrated people around the world demanded police reform and justice. Artist Ervin A. Johnson decided to use his art as a way to express his anger and hurt by creating a series of photo-based mixed media portraits called #InHonor. The project was meant to be cathartic, and the hashtag is purposefully included in the name to acknowledge the impact that Black Twitter has had in raising awareness about these murders. The day before the Chicago native started the #InHonor project, Alton Sterling was shot by police in Baton Rouge, Louisiana.

Now, the 13, 56-by-42-inch images of Black men, women and children that compose the #InHonor exhibition are on display at Arnika Dawkins Gallery on Cascade Road through December 16. The artist states his thesis in the first piece of the exhibition, which is a photo of sentences on a wall expressing the artist’s thoughts about police brutality. The Basquiat-esque piece is reminiscent of works in the The Unknown Notebooks exhibition that was at the High Museum earlier this year. In it, he quotes Jesse Williams’ speech from the BET Awards where the Grey’s Anatomy actor said “Just because we’re magic doesn’t mean we’re not real.” Johnson also writes: “How many more nights must we spend on bended knee asking our God to protect us from yours?”

Johnson has altered all of the works in the exhibition using bleach, paint and dirt. The photos of Black men and women have been altered, so that their Black features still show even though their lives have been obliterated, which is a part of the artist’s core message. Their kinky hair, brown eyes, wide noses, full lips and dark skin, show through even though the photos have been splattered with gold paint, sprinkled with bleach, stomped on and peeled in some instances. The shoeprints almost resemble African tribal markings across the subjects’ foreheads. In a statement from the artist, he said that he stomped on the photos to show that no matter what, Blackness cannot be stamped out.

Johnson does not utilize images of those who have actually been killed due to police brutality, which makes the message more palpable. At any moment any Black person could become a hashtag and a headline. He wrote: “I feel new. Not new born new, more like born again; revitalized. Like I walked through the threshold I’ve fought to get to for so long. Like this flesh has been baptized. But, what good does that do, when just last night another Black life was taken?” Though the news mostly reports police brutality toward Black men, the exhibition has images of men, women and children throughout. The photo In Honor: Tia features a hazel-eyed young woman with medium brown skin complexion wearing red lipstick. She has a silver hoop nose ring and studs in her ears. She does not look anything like the faces seen on the nightly news, but she is still affected by police brutality, because she is Black. Bleach and footprints appear across her head — the effect is similar to pouring water over wet ink.

The photo In Honor: J.R. is one of the most poignant in the exhibition. It is a picture of a dark-skinned Black man with a beard and mustache and diamond studs in both ears. He wears a black T-shirt and his eyes have been painted over with black and gold pigment. The brush strokes resemble the span of buzzard feathers when they are chewing roadkill. The dripping paint also looks like mascara running down teary eyes. A spot of brownish red paint at the top of his forehead looks like a gunshot wound with dried blood.

The photos of the children are the most striking. Comprised of a number of 4-by-6-inch photographs, their big innocent eyes follow you throughout the gallery. In Honor: J’La is a brown-skinned girl with plaited coarse black hair. She wears a denim jacket and her eyes are so brown they appear black. Her facial features have been distorted by bleach and paint, like she is being washed away. Another photo, In Honor: Noah, is of a little boy wearing a red, white and blue plaid button-down shirt that has been painted over with orange paint. His eyelashes and hair have been painted white and his green eyes are barely visible. His baby teeth are barely showing.

It seems like ever since the shooting of Michael Brown in Ferguson, Missouri, everyone is on pins and needles anticipating the news of another unarmed Black person killed by police. And what to tell the children, and how to protect the children has been top of my mind. Parents are more aware than ever of teaching their children how to behave if they are ever stopped by police. In a recent episode of the ABC television series Black-ish, the parents argue over how to explain the killings of young Black people to their 7-year-old twins. The mom, Bow, says “I don’t want my kids to feel like they are living in a world that is so flawed that they have no hope.”

To date, almost 850 people have been killed by police in the United States this year, and nearly a quarter of those people were Black. Through these 13 portraits, Johnson sheds light on this national crisis, and in all of the chatter about whose lives matter to whom, he has created a stunning series of photographs that turn brutality into art. Every face in the photos could belong to someone’s cousin, sister, son or friend, and the collective impact of the large photos together is very moving.