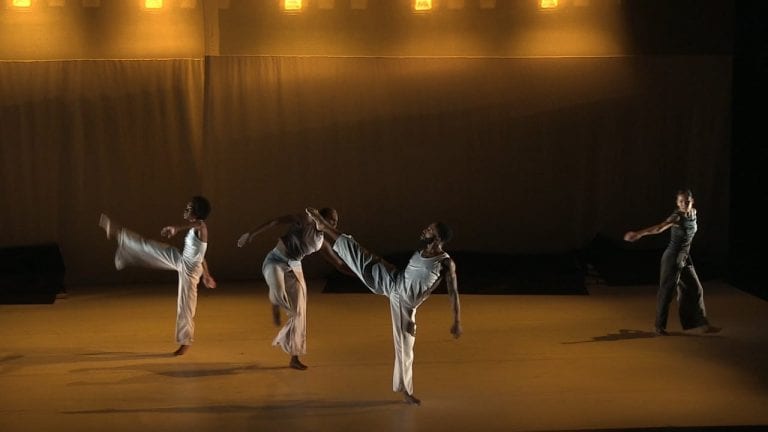 Kyle Abraham's "Absent Matters" was featured at Off the EDGE.

Review: Though playing it safe, “Off the EDGE” is still a “must-see” event for Atlanta dance fans

Here’s an impossible question: How does one design a two-day contemporary dance festival that is both palatable enough to hook would-be patrons and innovative enough to satisfy the seasoned dancegoers? For this year’s Off the EDGE, the daunting task went to Montreal-based curator Ilter Ibrahimof, who chose the 10 works for the 2016 biennial dance festival produced by the Rialto Center for the Arts. “A good curator’s eye has to consider and remember the climate of each city or venue,” Ibrahimoff told ArtsATL in a recent interview. And he always seeks out lesser-known companies to share a bill with more established names and widen viewership.

Ibrahimof’s inclusive philosophy and sharply honed curatorial lens resulted in eclectic, at times surprising, offerings by (mostly male) choreographers from Germany, Taiwan, Canada, Israel and New York City among others. Most of the works told stories, some undercut humor with gimmick and all flashed killer technique. We heard Dean Martin, Johnny Cash and Kendrick Lamar. A man and woman argued in gibberish, two guys pulled out toy guns and I discovered a love for flamenco.

Both nights opened with Eric Gauthier’s “Ballet 101,” a simple, supposedly humorous ode to the many positions of ballet. Ibrahimof wisely made it the evening’s warm-up act, placing the work before Rialto director Leslie Gordon’s curtain speech. Dancer Rosario Guerra of Gauthier Dance/Dance Company Theaterhaus Stuttgart clowned and hammed his way to mock exhaustion as a slick God-like voice (those who have studied ballet will recognize it) drilled him through 100 poses and movements — some balletic, some jazzy.

Like a reality show, “Ballet 101” presented a maddeningly shallow take on dance. But it broke the ice, and the audience seemed to appreciate the light-hearted introduction.

“Floating Flowers” employed a gimmick reminiscent of Pilobus’s 1975 “Untitled”: a tutu-clad female dancer rose to reveal a pair of brawny male legs beneath her. Cerrudo’s work, which featured three men wearing nothing but nude dance belts (read: thong underwear), capitalized on shock value as well but with a sophisticated nod to voyeurism and the sometimes-vulgar act of performance.

In three solos, Guerra, Maurus Gauthier and David Rodriguez (I imagined their names to be Paco, Pepe and Pluto) dazzled us with a gratuitous show of masculine power and musculature. Set to three Dean Martin classics, including “That’s Amore,” the dancers flashed huge smiles and leapt into the air at one moment and modestly covered their crotches the next. The play on vulnerability was both poignant and genuinely funny.

Kyle Abraham’s “Absent Matter,” a response to the racial climate surrounding the Black Lives Matter movement, provided a few festival highlights, including a stunning solo by dancer Tamisha Guy. An expertly mixed hip-hop sound score coupled with dizzying video projections often blurred the movement, making the stream of information hard to process. But Guy slowed us down. She embodied Abraham’s style with articulate limbs that sailed through his signature turns and swirling arms, leaving an almost visible trail.

Those who are familiar with New York-based choreographer Sidra Bell’s work saw a heavy influence in Friday night’s closer “Beau” by newcomer Madboots Dance. Co-choreographers Jonathan Campbell and Austin Diaz, both fresh from a five-year stint with Bell’s company, are undoubtedly fearless performers with a penchant for the dark and disturbing. Also clad in dance belts under transparent knee-length tights, the dancers shape-shifted through a series of vignettes inspired by text on suicide.

With almost 15 music credits, the 23-minute work employed abrupt changes — in both mood and music — as a choreographic motif. They tossed flowers in the air, tackled one another, and danced wildly with grotesque smiles forced open by mouthpieces. Intensely physical and clearly inspired by the growing popularity of Israeli contemporary dance, these two offered some of the evening’s most innovative movement and partnering.

Despite Madboots’ eye-popping closer on Friday night, Saturday proved the more exciting program with noteworthy performances by Atlanta’s own Kennesaw State University Dance Company and a stunning flamenco piece by the Montreal-based company La Otra Orilla. College dancers Julia Weiss and Isaac Rose, in “The Empty Room” by Israeli choreographer Ido Tadmor, showed off their dramatic chops and mature comedic timing in a hilarious riff on the trials and tribulations of domesticity.

Soloist and choreographer Myriam Allard, in “Moi and Les Autres (Me and the Others),” astounded with her contemporary take on the flamenco genre. Along with co-choreographer Hedi Graja, who also provided the haunting and powerful vocals, Allard commanded the stage with a fierce, haughty brashness unlike anything I’ve seen in recent memory. Caroline Planté’s fingers flew over the Spanish guitar, accompanied by Miguel Medina’s stirring percussion. The quartet transported us to another place: where a late-night performance is a spontaneous gift.

Though Ibrahimof should be commended for bringing so many international artists to Atlanta, Atlanta was conspicuously underrepresented on the main stage. Atlanta Ballet’s Wabi Sabi troupe was the only local professional company on the bill. And Ibrahimof did not include any work by an Atlanta-based choreographer despite the large pool of available talent, especially local female choreographers.

Thankfully, CORE Performance Company and the High Museum of Art sponsored EDGE in Unexpected Spaces, a delightful site-specific performance held in the lobby of 55 Park Place before the main event. Though only a small fraction of the larger audience saw it, local choreographers Greg Catellier, Kristin O’Neal, Sharon Carelock and Erik Thurmond of CORE delivered a short program full of playful surprises and innovative uses of sound and space. Israeli choreographer Sharon Vanzanna’s duet, “Transparent Borders,” highlighted some of the most intricate partnering of the whole evening.

Off the EDGE did not showcase “the planet’s most progressive dance companies,” as the program touted. But one viewer’s “progressive” is another’s “ho-hum, already seen it.” Ibrahimof’s lineup pushed both the palatable and the innovative, but assumed Atlanta audiences were more heavily interested in the first category.

While Saturday’s performance was before a near-capacity audience, Friday’s crowd was embarrassingly small for a curated professional show that only happens once every two years. Hopefully, Off the EDGE will soon become an annual event that includes more edgy, local (and female) artists and draws the full houses it deserves.