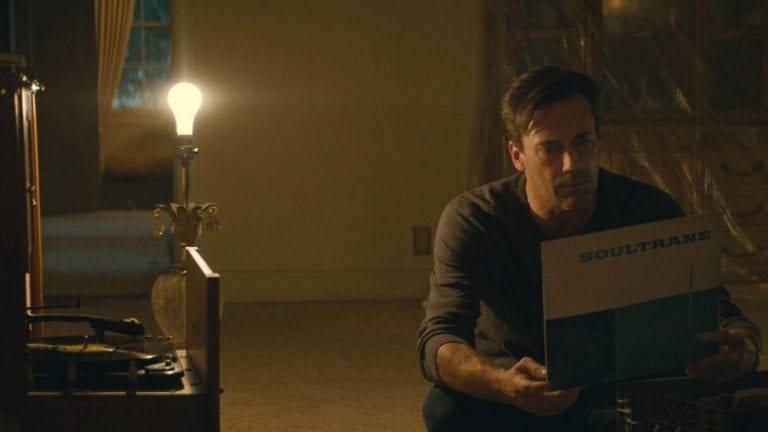 As terribly earnest as it is terribly written and directed, Nostalgia at least features some really good actors — though their talents are wasted, just like a family heirloom tossed in the trash.

If that simile seems strained, it will nevertheless give you a sense of the film’s much-too-on-the-nose dialogue about the importance of objects and mementoes in our lives and how all this stuff, like, means stuff.

Sorry for the dismissive tone, but the movie irks me because the baseline idea it’s exploring is endlessly rich. Writer-director Mark Pellington (who showed promise but missed the potential of both Arlington Road and The Mothman Prophecies) presents a sort of round-robin drama about people coming to terms with having to part ways — voluntarily or via sudden calamity — with the things they or family members have accumulated.

Actor John Ortiz initially serves as our tour guide, playing an insurance appraiser who sizes up the contents of the house of a grumpy old man (Bruce Dern). Ortiz next visits the McMansion where the old man’s pregnant, wistful granddaughter (Amber Tamblyn) frets that Pops hasn’t singled out a keepsake that he especially wants her to have. This is not a great dramatic crisis.

From there, Ortiz paces the charred footprint of the recently burned home where Helen (Ellen Burstyn, always good) lived. Her neighbors (including character actress Beth Grant) also lost their house, and while sharing a cup of java with these traumatized people, the appraiser delivers a remarkably insensitive monologue when he’s asked if he ever gets affected by the tragedies he encounters: “It’s best not to become terribly invested. To be honest, it never hurts me personally, and it never gets old. Every story has details that I’ve never heard before. Every person I talk to, I learn something new. You will never replace your things or lives. But I find something magnetic talking to people like yourself.”

I was surprised Burstyn and Grant’s characters didn’t jump up and punch this smug bastard in the face, but the filmmakers seem to think he’s delivering a wise commentary. The movie is crammed with vapid monologues like this one.

Eventually, Helen takes the one item she saved from the fire — luckily, her dead husband’s valuable, autographed Ted Williams baseball — to a collectibles shop in Vegas owned by Will (Jon Hamm). They monologue a while about, you know, things and stuff, and how all the items there have stories behind them, which is probably why they all ended up in a collectibles shop, right?

The good news is, Hamm’s arrival leads us to the next mini-drama, in which he begins to clear out his dead parents’ home with the help of his sister Donna (the always terrific Catherine Keener). It might sound cruel to say, but before they can babble too long about the importance of old books and furniture and knickknacks, Donna suffers a drastic personal loss. This allows Keener to deliver a searing depiction of grief at its savage, wailing, throat-ripping worst. For a few minutes, the power of her anguish connects in ways the rest of the movie never does. But the authenticity of Keener’s performance only underscores the fakeness of the rest of the script.

Too often Nostalgia plays like the film-school thesis of a very young person making would-be grand statements about things he has not himself experienced. Co-scriptwriter Alex Ross Perry is a young actor, but Pellington, in his mid-50s, doesn’t have an excuse.

After Hamm delivers one of the script’s many obvious, pseudo-profound observations to his screen sister, Keener replies, “You talk down to me so much, you must think I’m an idiot.” The movie treats its viewers the same way.