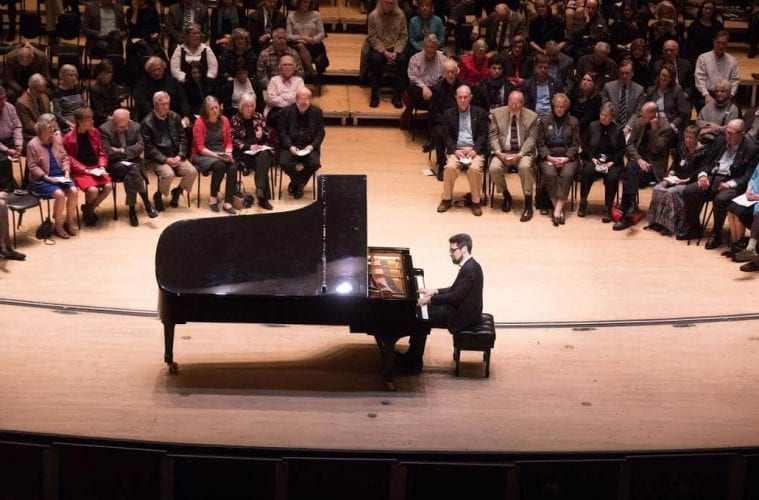 On Wednesday night at Symphony Hall, pianist Jonathan Biss performed the first of his highly anticipated recitals of the complete cycle of all 32 of Beethoven’s piano sonatas over the course of two seasons. Biss selected five for this first outing: Nos. 1, 9, 12, 13 and 21; their dates of completion span from 1795 to 1804 and represent Beethoven’s earliest published work in the genre to the beginnings of his middle or “heroic” stylistic period.

Subsequent installments in the series this season will come on April 4 and May 30, with the remainder scheduled for next season. Biss’ last appearance on the Symphony Hall stage was in October 2015, performing (not surprisingly) Beethoven’s Piano Concerto No. 5 (“Emperor”) with Robert Spano leading the Atlanta Symphony Orchestra.

The audience for Wednesday’s recital was seated primarily on stage, as is the practice with chamber concerts that occasionally precede regular Atlanta Symphony concerts, except that the usual orchestral setup for the musicians was replaced by a semicircular arrangement of black chairs. The piano was oriented to play to that primary segment of audience, and the stage seating was filled to capacity. Additional audience were seated out in the hall on the ground level, on the “orchestra right” so as to have a better view of the keyboard and Biss’ hands.

Biss is in the final years of a nine-year project to record all 32 of Beethoven’s pianos sonatas, with the seventh album in the series released in January. That Biss is touring the complete cycle is a natural complement, as are his intriguing, occasional “coffeehouse” talks about the sonatas and his “Exploring Beethoven’s Piano Sonatas” free online course from Curtis Institute, available through Coursera.

In this essentially chronological program, Biss’ style and coloration ranged from a bright classical approach that was more conventional of the 18th century’s final decades, but with Beethoven’s muscle, to digging in more deeply as the evening progressed. That was especially true in the final sonata, with the transitions taking place in Beethoven’s own thinking as a composer and pianist that made him the influential front-runner in what would be the ushering of western music’s romantic era.

Broadly speaking, Biss captured Beethoven’s essential character and pianistic drive and energy. However, his tempos in slow movements tended to feel like they pushed the front edge; they were a bit impatient in their forward pace, rather than holding the reins back in a way that would have drawn more momentum out of them versus plain speed. Biss exhibited lots of off-keyboard hand gestures in his playing rather than remaining close to the keys, with his rendering of the sonatas often letting go of elegance in favor of vitality. At some points they became ebulliently messy, though there were just as many moments that felt well-focused and grounded; some of the more lyrical passages were quite remarkable. 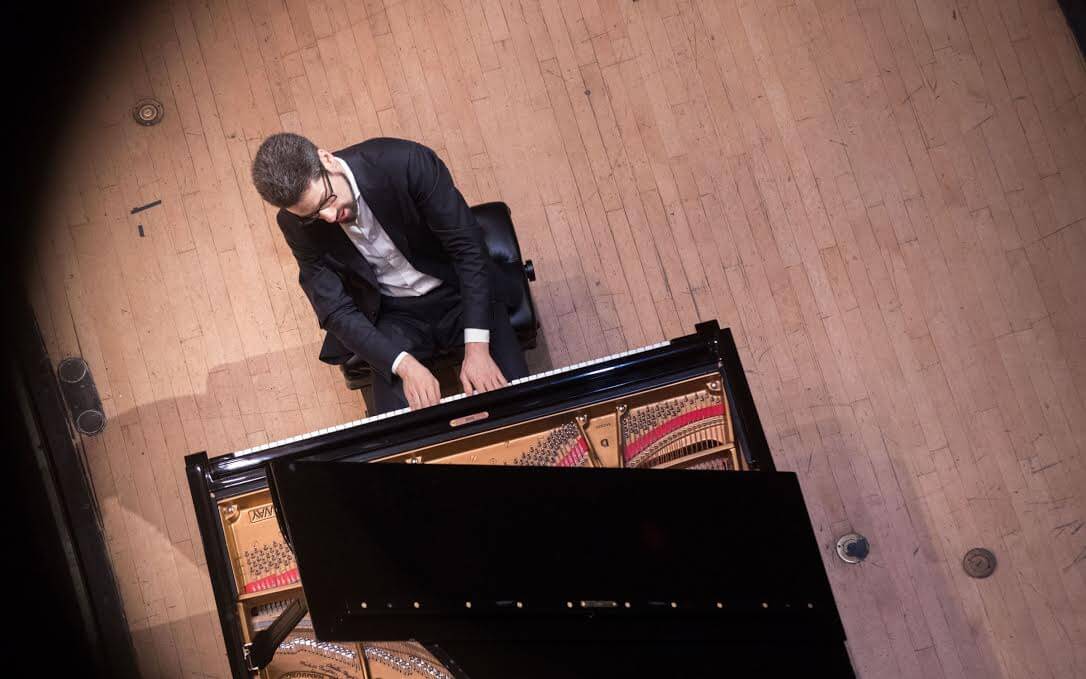 Biss opened Wednesday night’s performance appropriately with Beethoven Piano Sonata No. 1 in F minor, Op. 2. No. 1. Written in 1795 and dedicated to Joseph Haydn, this was not Beethoven’s first attempts at writing a piano sonata, but was the first of his published sonatas. Its fundamental elements of style are derived from Mozart and Haydn, but one can hear in thematic material the mark of the Beethoven yet to come.

Next up was Piano Sonata No. 9 in E Major, Op. 14, No. 1, another early-period work from 1798, but one which introduces the “Sturm und Drang” (“storm and stress”) sense of drama that would become so characteristically identified with Beethoven’s music in the contrast of assertive and lyrical elements.

The first half of the program closed with the Piano Sonata No. 13 in E-flat Major, Op. 27, No. 1, written in 1800–1801, when he was around 30 years old and beginning to stretch creatively beyond the classical-era forms of Haydn and Mozart. Marked “Quasi una fantasia” (“in the manner of a fantasy”), the entire piece is played through without pauses between movements. The structure is unconventional, with a slow-fast-slow-fast order of movements, and the first movement is not in the typical sonata-allegro form.

After intermission, Biss returned to perform the closely related Piano Sonata No. 12 in A-flat Major, Op. 26, nicknamed the “Funeral March” sonata. Also composed during 1800–1801, like No. 13, the order of movements is slow-fast-slow-fast. Both of them were composed around the same time Beethoven completed his Symphony No. 1.

Biss concluded the concert with the Sonata No. 21 in C Major, Op. 53, familiarly known as the “Waldstein” sonata, one of the most notable of his middle period, its grand scope exceeding his previous piano sonatas. It is one of Beethoven’s most technically demanding piano sonatas, especially when played on a modern instrument, which has a heavier action than the keyboards Beethoven himself played.