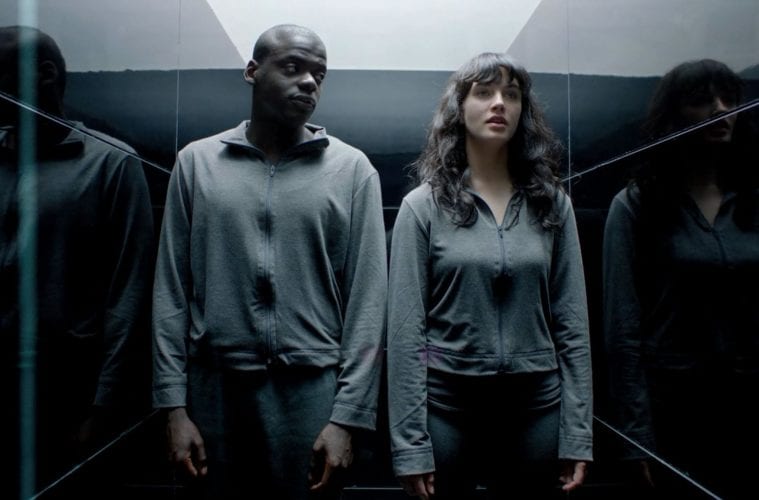 For the last few weeks, my streaming menu has been full of dystopic sci-fi, Gallic serial killers and — one happy outlier — a marvelous new comedy that the Golden Globes rightly rewarded.

Let’s start with the best, bleakest first. If you haven’t already binged on season four of Black Mirror on Netflix, what’s wrong with you? Are you trying to keep pretending that mankind isn’t on a doomed collision course with technology?

Creator Charlie Brooker’s series continues to be a smart, cynical and unnervingly plausible look at our wired lives and the dark paths digital technology might lead us. Boy, is it downbeat. The closest the season comes to the uplift of season three’s standout, “San Junipero,” is the dating-by-app romance “Hang the DJ.” On the other end of the spectrum, “Crocodile” almost becomes a surreal black comedy in dramatizing the extreme, bloody lengths an architect (Andrea Riseborough) is willing to go to to cover up evidence of a misdeed from her past. Only, it’s not meant to be funny.

Honestly, all the episodes are pretty great, from the black-and-white, post-apocalyptic “Metalhead” (man-killing robotic dogs!) to the season opener, “USS Callister,” an affectionate but also chilling episode that mixes a fond sendup of Star Trek with the portrait of a seemingly pitiable programming geek (Jesse Plemons) who secretly is a monster.

I wish I could be remotely as enthusiastic about Amazon’s 10-episode anthology Philip K. Dick’s Electric Dreams, but time and popular culture have caught up with and surpassed the writer behind Blade Runner and The Man in the High Castle. The series has good actors speckled throughout — Steve Buscemi, Greg Kinnear, Bryan Cranston, Anna Paquin, Geraldine Chaplin and Atlanta’s Janelle Monáe. But the stories, ranging from robot tales to outer-space adventures to meditations on alternate realities and merged identities, seem overly familiar from the ways other writers have used Dick’s ideas as launching pads in the 36 years since his death. (Black Mirror is very much an heir to his work.)

Electric Dreams comes off as a sort of modern-day Twilight Zone, with not-so-very-special effects. I did like “The Hood Maker,” “Safe and Sound” and “Human Is” (the one with Cranston). But even these, like most of the other episodes, have twists too easy to predict. Maybe you’ll like the series more than I did. In The Mantis, Carole Bouquet plays a serial killer whose son grows up to be a police detective.

The two French serial-killer dramas I watched on Netflix, both from 2016, lean on the overly familiar Silence of the Lambs template: a detective has to meld minds with an imprisoned criminal genius in order to try to solve a new string of murders.

To its credit, The Mantis (La Mante) gives the familiar plotline a familial, female spin. Carole Bouquet plays Jeanne, known for a string of inventively disgusting murders she committed against despicable men years ago. Her young son at the time has now grown up to be a detective, Damien (Fred Testot), who wants nothing to do with his mother. That changes when a series of new copycat murders begins, and Damien has to visit Jeanne to pick her brain about who the new killer might be.

The series puts Bouquet’s glacial, fashion-model blankness to good use; she’s unreadable. Unfortunately, Testot (a James Frey lookalike) also has basically one expression: simmering rage. He’s a drag. But what really sinks The Mantis, in its final episodes, is a huge, transphobic plot twist. People complained about the implications of the cross-dressing elements in both Silence of the Lambs and Dressed to Kill, but those movies look progressive by comparison.

Much more satisfying, despite the lousy name, is The Frozen Dead (simply Glacé in the original French). Charles Berling (of Elle) plays Martin, a detective who returns to the small Pyrenees town where, 10 years earlier, he sent to prison a serial killer of young women. That’s Hirtmann (Pascal Greggory), once a respected prosecutor now locked up in a psychiatric facility a little like Carole Bouquet’s. The crime that brings Martin there is the decapitation and grisly display of the prize racehorse of a local factory owner. That odd killing is the start of several more that gradually connect to the mysterious deaths of three teenage girls many years ago.

In addition to the gorgeous, wintry scenery, what distinguishes Dead is a handful of supporting female characters who turn out to be far more interesting/complicated than usual in these sorts of thrillers: Martin’s lesbian partner Irène (Julia Piaton), a young psychiatrist named Diane (Nina Meurisse), who has an obsession with Hirtmann, and her boss at the psych prison, Elisabeth (Lubna Azabal). What you discover about their motivations is possibly even more interesting than the big reveal of the main mystery. And, happily, the emphasis tends to be on these characters and Martin, rather than Hirtmann, who’s not that interesting as movie monsters go.

Another 2016 mystery I watched, on Amazon, is The Kettering Incident, which has heaps of mood but takes forever to go anywhere. Elizabeth Debicki, who I liked in The Night Manager, plays Anna, a London doctor who returns to her small hometown in Tasmania, where she’s persona non grata (even to her dad) because of the unexplained disappearance of her friend Gillian in the woods years ago. People suspect she killed the other girl. All she can recall is mysterious lights over the mountains, and now she’s plagued by troubling, vague memories and nosebleeds. Rachel Brosnahan earned a Golden Globe for her role in The Marvelous Mrs. Maisel.

Is it UFOs? Or was Anna responsible for the girl’s disappearance? Why are the fish in the bay dying, and moss blossoming on people’s flesh, and what’s it all got to do with the lumber company and the “greeny” activists trying to keep them from logging the forest? Well, it takes Incident forever to offer at least some vague answers before it abruptly ends. Mostly it feels like a wannabe Twin Peaks, only without much plot, dialogue or characterization. Debicki is forced to mope through the episodes like a sleep walker. I was really, really glad that Amazon has that button that lets you fast-forward 10 seconds at a time. I hit that baby a lot.

That actress is Rachel Brosnahan, who plays the titular Miriam “Midge” Maisel, a nice Jewish-American princess in 1950s New York, living in the same luxe apartment building with her parents (Tony Shalhoub and Marin Hinkle), her husband Joel (Michael Zegen) and their two young kids. Though he’s got a corporate job in plastics, Joel wants to be a standup comic like the groundbreaker Lenny Bruce (Luke Kirby, who serves as a kind of deus ex machina in the series). Problem is, Joel isn’t funny and steals other comedians’ routines, earning him the disdain of the butch booker, Susie (Alex Borstein), at the café where comics and musicians try out their acts.

Well, a lot changes for Midge in the first episode. Over the show’s eight episodes, we follow her foray into the working world, and her attempt to hone her own standup act at a time when “ladies” weren’t supposed to be funny. The show itself is very funny, and Brosnahan is a delight who strikes just the right notes of entitlement and vulnerability. And nobody out-Shalhoubs Tony Shalhoub; as Midge’s long-suffering dad, he’s fantastic, and Hinkle is no slouch as his equally long-suffering spouse.

But for me, the core of the show is the bond between Midge and Susie, who becomes Midge’s manager and tough-love sounding board. It’s a friendship that ventures, in its intensity, on a love story.

P.S. to Amazon’s “thought leaders,” or whatever the hell they call themselves now: Friends of mine are very bummed that you’re not renewing I Love Dick. I’ve never seen it. But I personally hate that you chose not to take the Sea Oaks pilot, starring Glenn Close and based on a George Saunders story, to series. And I’m even more upset that you’ve canceled the Tig Notaro/Diablo Cody series One Mississippi after two seasons. It was terrific, and in its veiled, Louis CK plotline about workplace sexual harassment, was a bellwether for #MeToo.