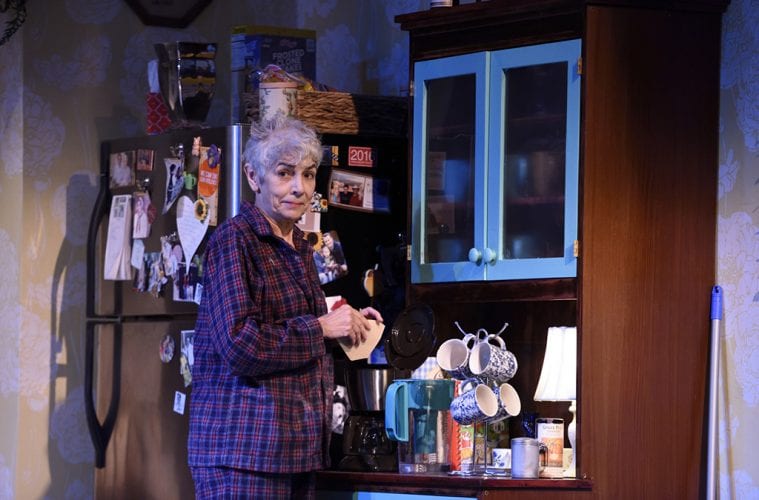 Ask any great cook how they make a dish, and the answer is often frustratingly imprecise. “I add enough of everything. I stir until it looks right, and then I cook it til it’s done.” This may be a crafty strategy for guarding culinary secrets, but more often than not, it’s simply an expression of the way great cooks think. They create, not with measuring cups and teaspoons, but with their senses.

The same is true of the experiential nature of bread-baking. Its connection to intimate, familial knowledge lies at the heart of Mary Lynn Owen’s splendid, beautiful and touching new autobiographical one-woman show Knead, currently having its world premiere at the Alliance Theatre’s Hertz Stage.

It’s a late, sleepless night as the play opens, and Owen is in the kitchen worrying over a fresh batch of dough that she left earlier to rise. She understands the various steps in making bread, right down to the science behind the yeast, gluten, the kneading and the rise, but the art of it eludes her– most of her recent attempts to recreate her mother’s recipe have come out poorly. To pass the time, to both face her troubling late night thoughts and evade them, she speaks about her life. The stories center on her family and especially her socially displaced Cuban mother, who married a Methodist preacher from Georgia. 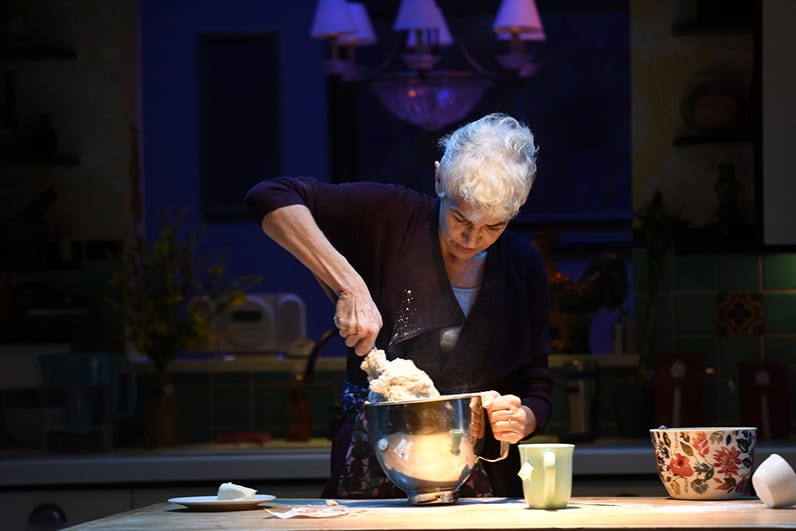 Owen sorts through her past while baking bread in the world premiere of Knead.

One of the play’s many strengths is its surreal, dreamlike atmosphere, all greatly enhanced by Joseph Futral’s lovely lighting design with its rich and varying twilight shades. Owen seems vaguely, dreamily aware of the audience’s presence, and in a simple but effective device, she’s puzzled by the objects from her childhood — a tricycle, a 4H vest, a football helmet — that she keeps finding in the refrigerator or in the kitchen cabinets. Owen technically never leaves the kitchen, but her tales wander widely, from her peripatetic childhood to various adult familial crises.

Director David de Vries wisely keeps the pace always in motion but also always unhurried. The overarching metaphor of the transformation of the bread, which could otherwise start to seem precious or heavy-handed, remains natural and apt. Owen is at her best when considering the mystery of her mother, a subject she often approaches obliquely, dashing away and then returning again, as the mother’s personality and experience emerge through the telling of many different stories. There is never any great claim on some huge swath of broad cosmic significance. It’s a play that’s comfortable with its sense of quiet intimacy, with its sense of a shared, lived moment of storytelling.

In the theater, as in baking bread, there is no precise formula. At the end you either have success, or you have something frustratingly close. In Knead, Owen as the teller ultimately reveals herself as an unsettled blend of opposing characteristics — fragile but enduring, energetic but spiritually exhausted, agitated but accepting — qualities that all seem especially recognizable and human in this particular political, cultural moment. It’s ultimately a pleasure to worry with her wide awake in the kitchen late at night, in the end not knowing what the secret ingredient is in the play’s wonderfully intimate and irreducible alchemy, but knowing without a doubt that it’s there.