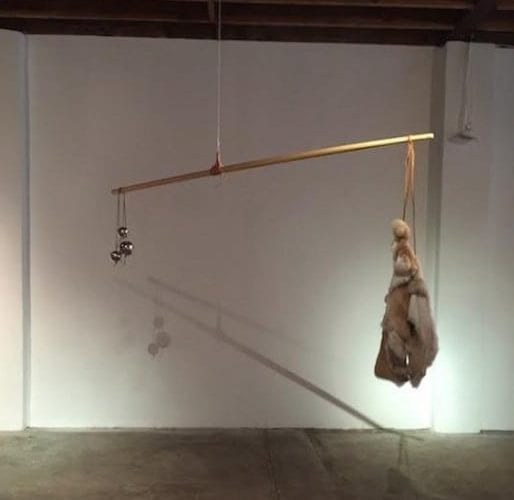 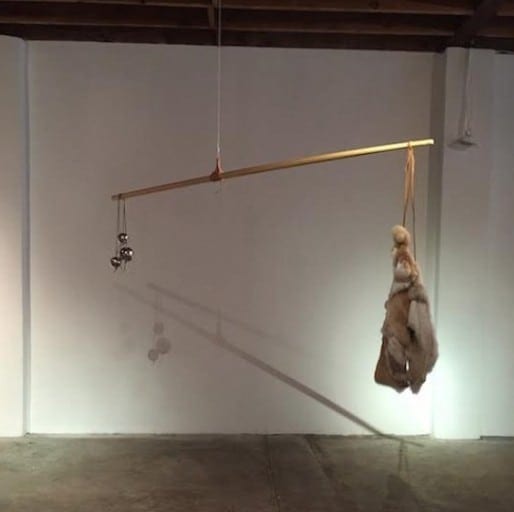 In an eerie mix of Anglo-European and Native American cultures, symphonic music weaving around a foreboding drumbeat enmeshes visitors to Dashboard’s North Avenue gallery through July 18. Against this backdrop, the videos and eight minimalist sculptures in Martha Whittington’s Exchange pose questions about the impact of assimilation and commerce on Native American cultures and the parallels to our present consumer society.

To Anglo-European traders the New World was a paradise to be exploited for its abundant natural resources. In exchange for desirous but low-value trinkets, metal pots, woolen blankets and glass beads, Native Americans provided traders with high-value items of furs and skins that were manufactured into leather goods and beaver hats sold for substantial profit on European markets. The introduction of a Western monetary system, foreign to Native Americans, eroded the gift economy of indigenous people in which objects of equal value were bartered with mutual respect. 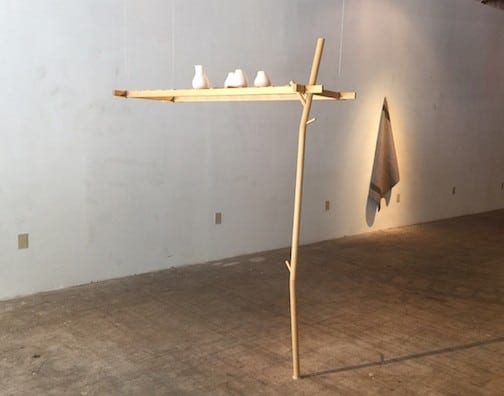 Whittington suggests the disastrous effect of these practices on Native American communities in the stunning ghost-like apparition at the entrance to the exhibition, a beautifully crafted wood sculpture of a burial scaffold floating ephemerally in the space. The slatted burial platform, supported by a single poplar pole, holds an elk hide and three unglazed porcelain pots reminiscent of the San Ildefonso Pueblo pottery made famous by Maria Martinez. The hide and pottery offerings in this contemplative work signal the ultimate price paid by indigenous people in their dealings with traders.

Nearby, a dark grey blanket drapes softly against the wall. Whittington described a childhood game of trade played with her brothers using a prized Hudson Bay blanket, as the inspiration for this work. Made of industrial felt with hand-drawn charcoal bands and stitched hatch marks, the facsimile trade blanket is paired with a video of a formless animated image. An ambiguity in the video, suggesting possible smoke signals or conjured spirits, hints at the misunderstandings at work through the spoken and often broken agreements between the Europeans and the native people.

There is no ambiguity in a finely carved teepee pole suspended from the ceiling. A clutch of sparkling stainless steel baubles hangs from one end, balanced at the other by a skein of rabbit furs. The reciprocity of the traded objects makes clear the empty exchanges that robbed Native Americans of their natural resources. Peering into the irresistible mirrored surface we meet ourselves, sudden participants in an uneven exchange of human desire.

Many layers of detail contribute to this finely tuned installation. The sound envelope that enfolds the sculptures was a collaboration with Rae Long, a composer living in Norway. Titles for the sculptures use a history museum trope of abbreviations, such as “FPSS” for First Peoples smoke signals. Whittington’s mix of natural and synthetic materials reminds us that reproductions of exotic objects were a means of assimilating Native American culture into Western culture.

Not least is the flawless blending of idea with craftsmanship that characterizes Whittington’s practice. A satisfying pleasure can be found in thoughtfully designed details such as the leather cincture that grips the suspended balance pole. To make a fish trap, Whittington researched traditional methods for bending wood without using steam and even chewed some of the rawhide strips that join the frame together. Her jaw hurt for days afterward. 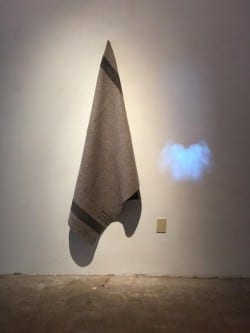 In the prologue to The Earth Shall Weep: A History of Native America, James Wilson states, “The belief that we all stand at the centre of a reality in which, in some way, past, present and future all converge, is common to many Native American cultures.” Whittington’s installation draws a close circle around our legacy of early contact with Native Americans and offers an opportunity to think differently about the place we occupy in this circle.

The rapacious plundering of cultures and despoliation of land for profit has reached new heights in the 21st century. Whittington prods us to remember the past in light of the present and to seriously question the future.