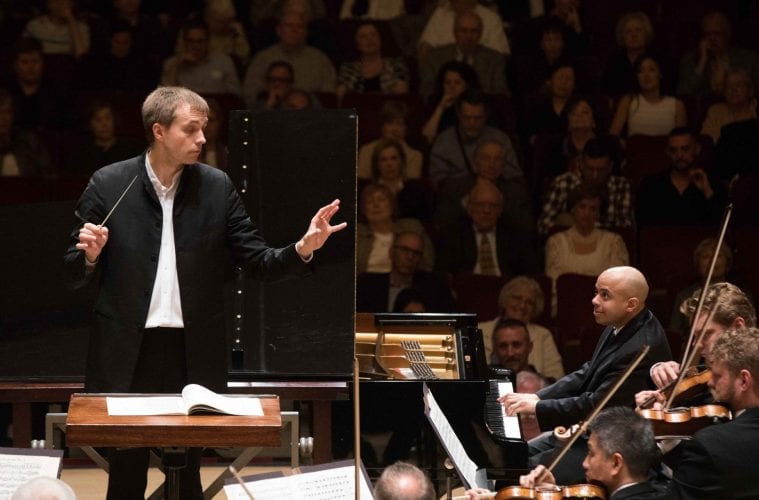 On Thursday at Symphony Hall, the Atlanta Symphony Orchestra performed a concert of music by Richard Strauss, Mendelssohn and Dvořák, led by guest conductor Vasily Petrenko, with pianist Stewart Goodyear as featured guest soloist. Goodyear is substituting for scheduled pianist Ingrid Fliter, who was unable to come to Atlanta for this week’s concerts. The program will be repeated on Friday evening at the Bailey Performance Center on the campus of Kennesaw State University, and again on Saturday evening at Symphony Hall.

The program was the kind that makes the typical subscriber happy: familiar, non-adventurous works from 19th-century repertoire, but convincingly well-played.

The concert opened with “Don Juan” by Richard Strauss. Strauss began the piece in 1888 when he was 24 years old after coming across “Don Juans Ende,” a play developed from an 1844 retelling of the story of legendary poet Nikolaus Lenau. Strauss completed his tone poem and conducted its premiere the following year, and it immediately established his public reputation as a composer.

The curiosity is that unlike the trickster-philanderer of the Renaissance legend or even of Mozart’s opera Don Giovanni, Strauss’ portrayal of the Don, via Lenau, excuses his womanizing as a heroic if fruitless search for “the ideal woman” — and failing that, he allows himself to die in a duel.

As totally programmatic as it is, the music itself serves as a good example of late German Romanticism’s evolution toward a kind of end-of-century modernism that had not yet collided with the cultural upheavals of the early 20th century.

The work’s popularity has been sustained in the repertoire to this day, such that it used to be greatly overplayed on public radio — back in the days, that is, when public radio more strongly featured and sustained classical music programming. Not all that long ago, actually.

Petrenko and the orchestra gave “Don Juan” a muscular, forward-moving performance that suited it well and shook off the dust of familiarity a little and gave it a bit of fresh, new energy.

Canadian pianist Goodyear then joined Petrenko and the ASO to perform the Concerto for Piano and Orchestra No. 1 in G minor, Opus 25 by Felix Mendelssohn. A bit of a classicist in his leanings toward repertoire, Goodyear was previously heard with the ASO in 2012, performing Mozart’s Piano Concerto No. 24 in C minor (K. 491), an uncharacteristically dark, mature work for that short-lived composer. Mendelssohn’s concerto is, by contrast, an ebullient youthful work that is a marker of budding Romantic thought that has not abandoned classical roots — something that suited Goodyear’s playing well.

Goodyear possesses a capacity for lightning-like velocity, well-controlled, with a bright clarity of tone, but also an ability to back off and become more introspective when the music demands. A capacity for velocity, however, does not always mean you have to use it to its fullest extent, and the outer movements of this concerto especially felt like they were on the front edge, a little more urgent than they need to be, even though the achievement itself was quite impressive.

The Symphony No. 8 of Antonin Dvořák concluded the evening with its optimistic, Bohemian folk-influenced flavor. Like the rest of the program, it felt like it was on the front edge of pace but didn’t sound as rushed as the Mendelssohn piece. The third movement was unusually buoyant, the finale rousing with a forceful conclusion. Overall, the work did not feel “overdone” as it sometimes can, and it wore well on the ear without tiring.

In advance of the orchestra concert, on Thursday only, members of the ASO performed one of their chamber concerts with audience seated onstage. Mendelssohn’s Octet for Strings in E-flat Major, Opus 20 (1825) was performed by violinists Justin Bruns, Anastasia Agapova, Sou-Chun Su and Kenn Wagner; violists Madeline Sharp and Paul Murphy; and cellists Christopher Rex and Brad Ritchie.

The Octet was written when the composer was 16 years old, as a birthday gift for his violin teacher, Eduard Ritz, then slightly revised before its first public performance a decade later. It is a bright, youthful work, played with considerable verve by the eight ASO musicians.