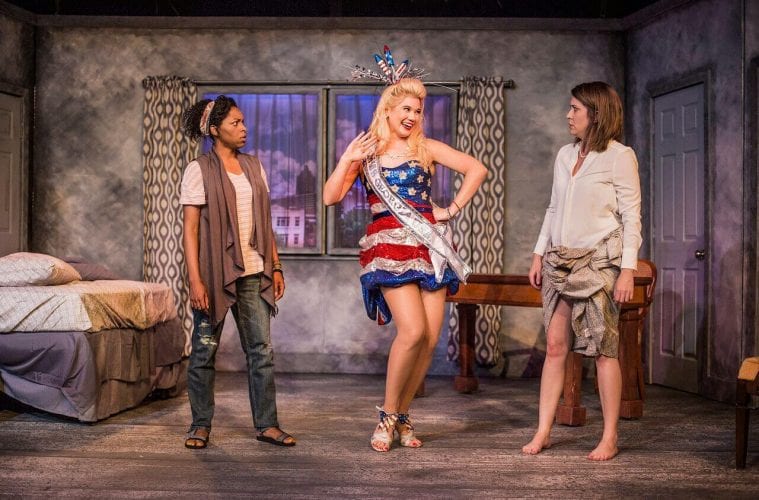 Review: Lauren Gunderson’s “The Taming” takes an irreverent (and decidedly witty) aim at our political divide

When placing politics on the stage nowadays, absurdism and farce seem the best, if not the only possible, approach. It’s the tack of playwright (and Decatur-native) Lauren Gunderson in her fine new comedy The Taming, currently having a production at Atlanta’s Synchronicity Theatre through June 24.

Any plot description must come with the requisite spoiler alert warning. Part of the fun of the play derives from Gunderson’s skill at withholding and slowly revealing information; we get our bearings along with the lead characters, who awaken in bizarre circumstances.

In the play, which takes its title and characters’ names (if little else) from Shakespeare’s famous comedy The Taming of the Shrew, Katherine (Caroline Arapoglou) is an extremely driven, somewhat misguided beauty pageant queen who wants her social platform segment in the upcoming Miss America contest to go far beyond the usual patriotic platitudes. Starting from scratch by rewriting the Constitution, she’s decided, is the only way to correct the mess we’re in. To begin, she has to get the two opposing, deadlocked sides of American politics to speak with each other; the only way to do that in this environment, she’s decided, is to drug and kidnap a representative from each side of the political divide and to lock them in a hotel room until they can compromise on a new version of the Constitution that can correct our busted system.

At the opening of the play, waking up in an anonymous hotel room are Patricia (Kelly Criss), a hyper-efficient Chief of Staff for a leading conservative Southern senator, and Bianca (Jimmica Collins), a bleeding heart liberal blogger whose cause du jour is an endangered rodent named the panda shrew.

The situations are cartoonish, but the dialogue clever and whipsmart, an unusual combination. The play probably won’t divide viewers based on any particular political stance–it seems pretty even-handed in its cuttingness–but it may divide audiences based on its unusual tone. Director Suehyla El-Attar, correctly I think, keeps the speed fast and the volume at 11, so to speak. (The play is miles away from the quiet, intimate mystery of Gunderson’s I and You, which had a strong production at Aurora Theatre in 2016).

The play’s sense of irreverence and “irreality” is maintained throughout. To criticize the play for straining credulity wouldn’t exactly be fair since that’s clearly one of its aims, but in straining credulity, the actual targets can become blurred. The farcical exaggeration of political positions makes its point, but things are often so extreme and emblematic that the satire can feel like it’s missing the mark: Katherine speaks and behaves in a way that beauty queens haven’t in decades, Patricia is puzzled by Bianca’s addiction to social media in a way that no savvy political conservative would be nowadays, and Bianca’s devotion to the panda shrew and other micro-causes is so ludicrous as to seem like a satire of nothing other than someone’s conception of what a liberal is like. Sure, it’s a comedy, but notes of archness, facetiousness and silliness in the goings-on can sometimes allow the political subjects being skewered to recede rather than to emerge on stage to take the drubbing they so richly deserve.

Still, the play’s sustained sense of energetic, exasperated, but distantly hopeful satire is memorable and ultimately winning. I especially admired an extended Act II scene in which we can barely get our bearings in a hilariously giddy, drugged-out sequence (again, spoiler alert: trying to figure out what the hell is going on is part of the fun) in which Patricia dreams of being one of the founding fathers as they gather to write the Constitution; it all has the wicked fun and rapier-like energy of a great Saturday Night Live sketch.

The sense of farcical extremity may grate those who aren’t tuned into its wavelength, but in the end, most viewers showing up at the theater will find the comic relief welcome. Politics have become such an unpleasant and dispiriting subject; there’s a lot to praise in a play where the feeling is fast, witty, incisive, informative, thought-provoking and — dare I say it — fun.