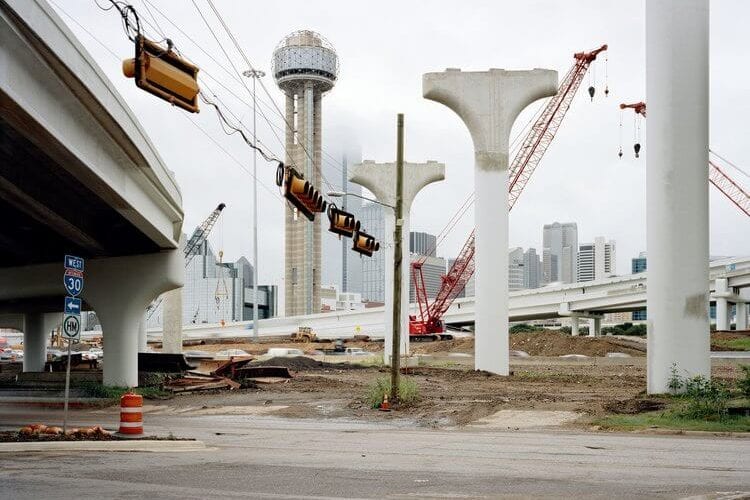 The Atlanta Photography Group describes Know South/No South, opening at its gallery on June 8, as “an exhibition that explores and challenges the idea of Southern identity in the 21st century.” Juried by Ogden Museum of Southern Art curator of photography Richard McCabe, it presents the work of seven photographers who presumably advance that work of exploring and challenging.

By way of preface to a survey of metro Atlanta exhibitions that might also prove useful for anyone else who undertakes that work of exploring and challenging, I am going to focus on two photographs from the exhibition, Backroad, Rabun, GA, Jennifer Garza-Cuen’s photo of a forest road, and Dallas, Texas, Joshua Dudley Greer’s shot of highway construction. They form a useful shorthand for the problem before us (and before curator McCabe). 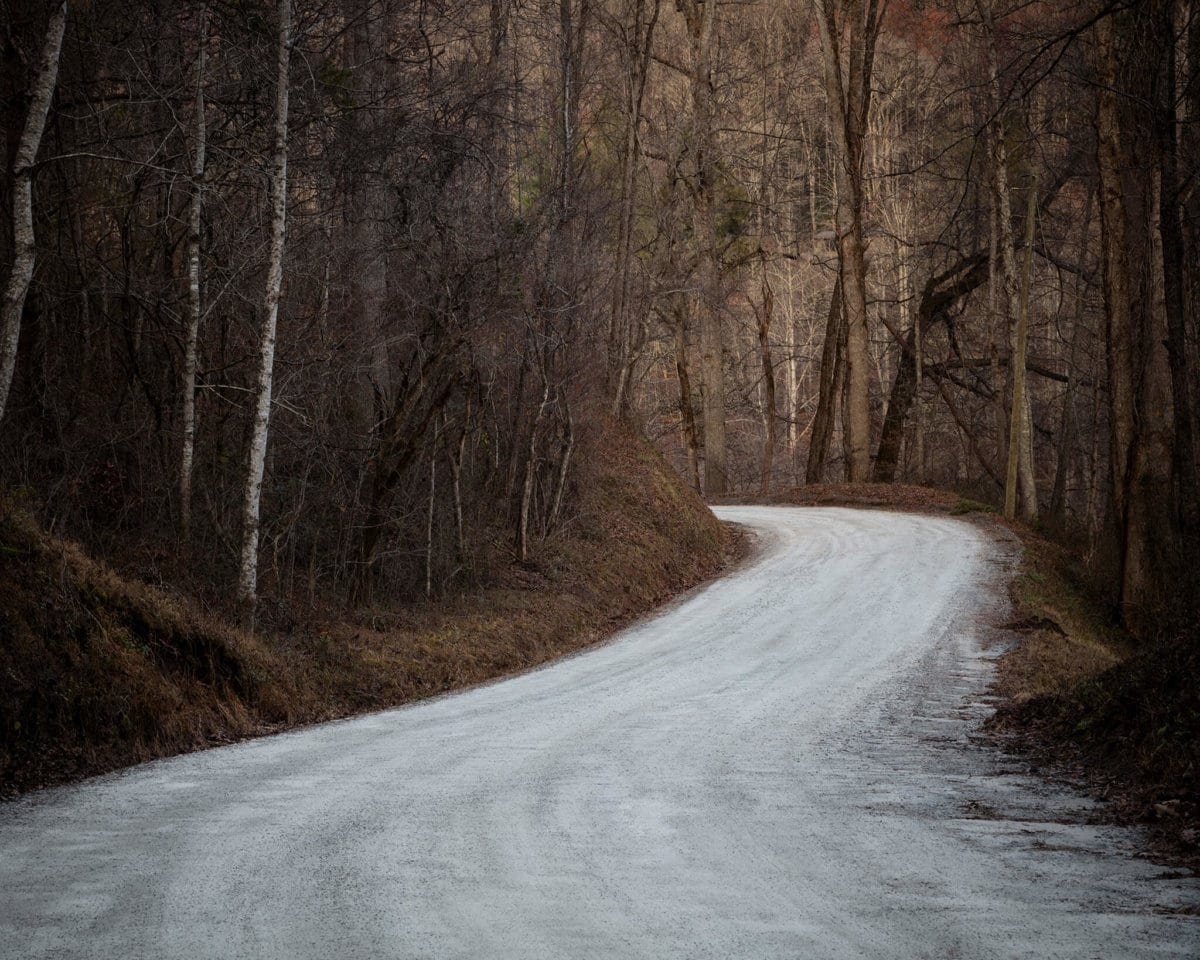 The one presents a rural archetype (some would say stereotype) viewed from a slightly different perspective. The other presents a nearly universal urban phenomenon in a context that has a degree of regional specificity for those who know the shape of the Dallas skyline. Both give us information about the South as well as the aesthetic pleasure given by a well-composed photograph; but what kind of information is it?

How do we know the South in a world of homogenization in which the actual buildings and landscapes suggest that in many ways there is now “no South”? The geographic region and the various cultures that make up “the South” all still exist, but they exist in a very different context and under different conditions.

I am going to do no more than propose a few starting points for discussion, as I point out some artwork currently in museums and commercial galleries in metro Atlanta. I am bracketing the question of relative importance; all of these works are worth thinking about as well as enjoying, but they were created for different purposes and for different audiences. I present them together because all of them can be seen at present, at least for the next several days, and because, when taken collectively, these works say something about how art in Atlanta venues presents aspects of the South through its landscape and architecture. With one or two crucial exceptions, I am leaving images of the people of the South out of this discussion, even when there are ample examples of them by the same artist in the same exhibition. 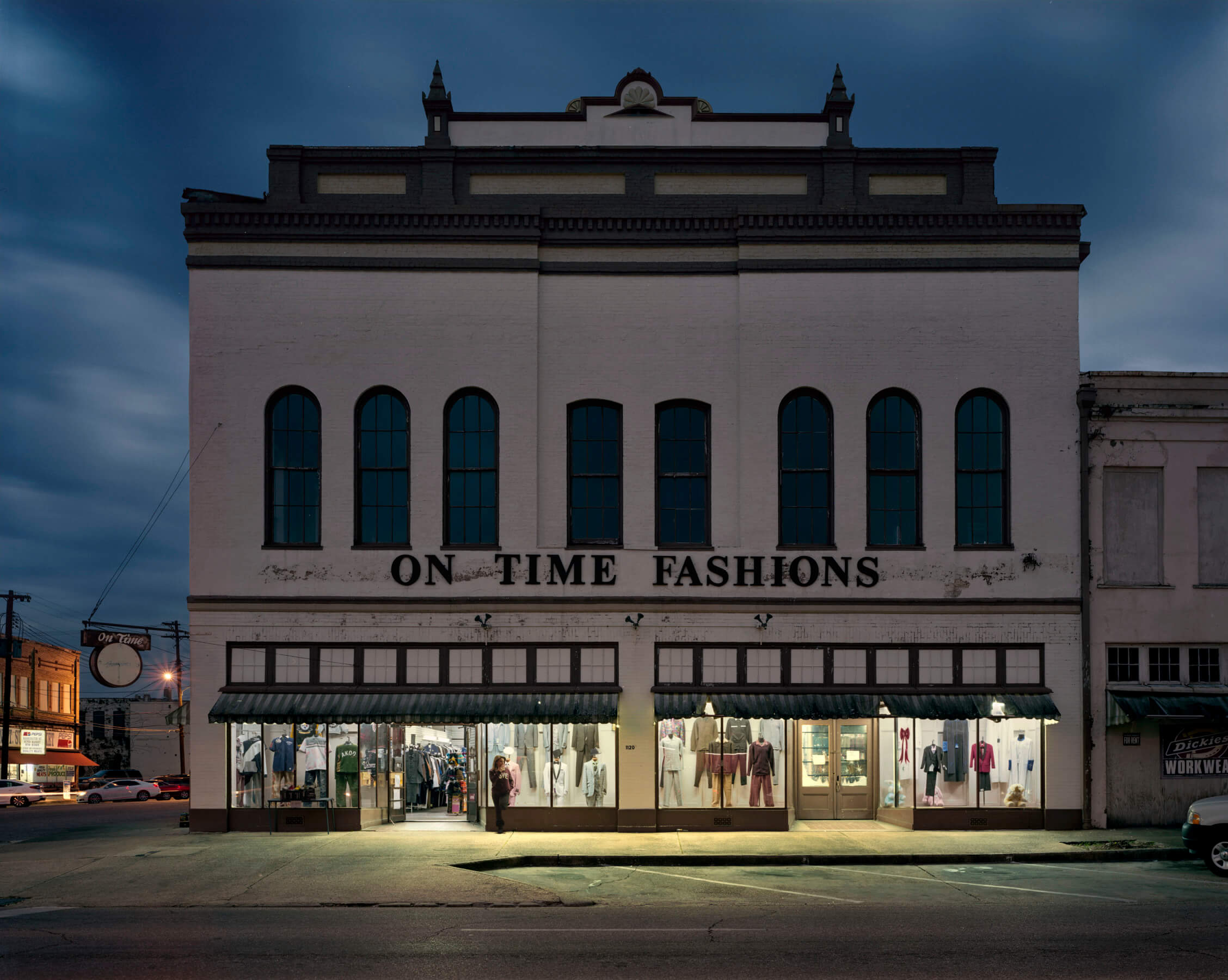 The easiest route that painters and photographers take to knowing the South involves looking for the places and scenes that do not change. At Jackson Fine Art through July 7, Blue Alabama is the outcome of landscape photographer Andrew Moore’s visit to that state in search of what makes it distinctive. Moore captures a range of elements that some would call archetypal and others would call stereotypical. For my purposes here, the name of the category is immaterial; whatever they are, what caught Moore’s attention were such things as portrait paintings in a historic mansion, a cotton seed barn in deep twilight, a charmingly named store in Selma and other markers of past affluence and present poverty that other photographers have also found arrestingly picturesque. What he does with them is extraordinary, as one would expect from a photographer of his stature. However, what ends up in an exhibition inevitably loses the “complexity and contradiction” of which Moore writes in an article about his project published in The Bitter Southerner: he also seems relatively unaware that his sense of being “a listener on history’s doorstep” situates him within a tradition of semi-failed attempts to understand the South, partial failures because the effort to listen to what is being said and observe what is being done is shaped and framed by the expectations of the observer. All of us, not just Moore, tend to find fewer surprises than we should when we enter into unfamiliar environments. 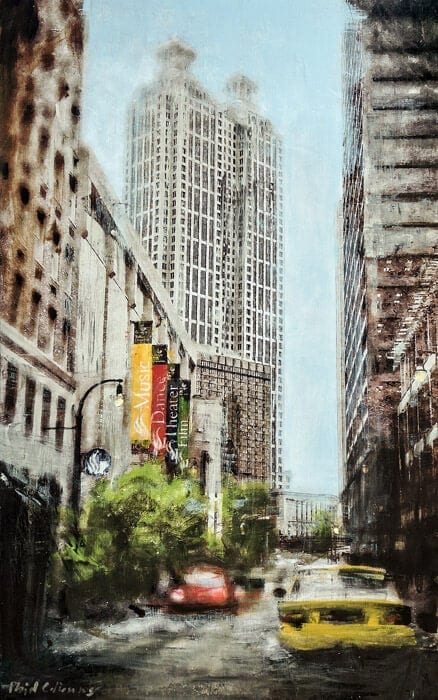 Many Southerners have strong emotional attachments to the same sort of rural architecture that proved appealing to Andrew Moore, and examples of this attachment can be found in Matre Gallery’s casual group show Summer Shindig, through June 30. Robert Matre’s own striking painting of a coastal marsh and his collaborative paintings with Evan Jones (under the name Plaid Columns) based on Matre’s photographs of rural buildings are, according to Matre, his connection to “something strong and real and timeless. I feel if they work for me, the viewer will connect as well in a similar fashion.” From this demonstrably accurate perception — viewers respond positively enough to such work to buy it — entire books could be written, making mutually exclusive arguments regarding the reasons for the strong appeal of the well-constructed rural home or store and the particularly memorable natural vista — a type of response that can be found in a number of cultures across the planet.

Work based on sentiments similar to Matre’s, but focused on existing urban architecture instead of rural, can currently be found in several locales around the metro area, including the Decaturscapes show at the Different Trains Gallery space in downtown Decatur’s Cornerstone Bank, and the Brickworks Gallery exhibition of Atlanta paintings by Emma Knight recently discussed in an ArtsATL preview. One way or another, whatever remains distinctive about Southern places finds its way into artworks of many different styles and intentions, in a form that might be called nostalgia for the present.

It’s worth noting that a Plaid Columns painting of present-day Atlanta, Forsyth Street, summons that sense of aesthetic amazement, a distinct departure from their preoccupation with barns and barbecue restaurants, and this raises even more complex questions about why so many of us respond in this way to landscape and city vistas. 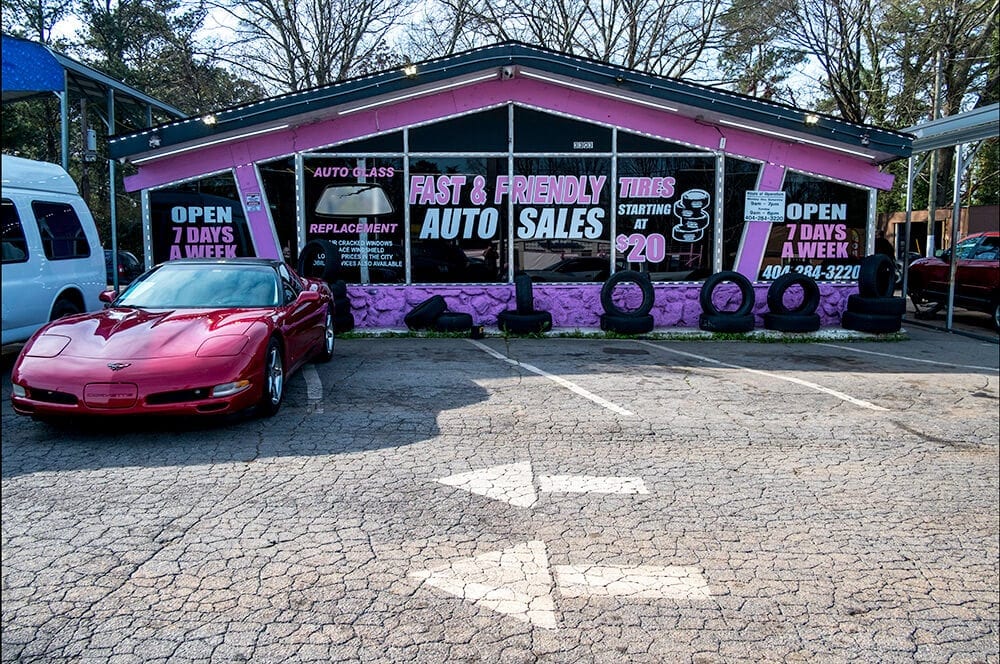 Matt Haffner’s photographs in his Harmonic Dysfunction exhibition (at Whitespace through June 16) confront a different, less distinguishable part of the South, the spaces on the margins of cities where the architecture is determined by the function of the services provided by auto body shops, liquor stores and other unromantic enterprises that are often visually identical in cities across America. One wall of the gallery presents two photographs taken in Denver and two in Atlanta, and it is impossible to identify the city from the visual cues, even though the auto repair shop that appears in Fast and Friendly would strike many as distinctly Southern. It isn’t, any more than the vertiginous labyrinth of contrasting colors that Haffner found in the Buford Highway restaurant that yielded Down the Rabbit Hole. 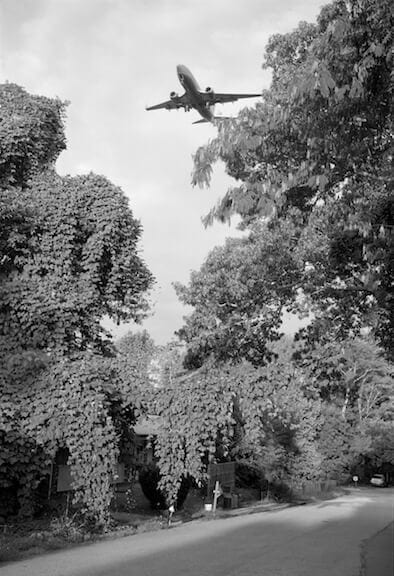 Atlanta Hartsfield-Jackson International Airport is often also as generic as airports in general are fated to be, despite its laudable efforts to distinguish itself by its public art program — although parts of this might have provided clues to regional identity if Mark Steinmetz had chosen to photograph art objects in his multi-year documentary study of the airport and its environs, the results of which are on view through June 24 at the High Museum in Picturing the South: Terminus. It may be worthy of contemplation that among the many images on display, the two most recognizably Southern depict the exit signs for the airport off the Interstate and a jetliner soaring dramatically above a thicket of kudzu.

That same tension between anonymity and regional identity can be found in Steven Walker’s paintings of cities at night, some of which will be on display at Lagerquist Gallery in an exhibition opening on June 8. Walker’s cityscapes can have an air of Edward Hopper hybridized with David Lynch, although most often they are more innocently Hopper. The Sign of the Times, however, suggests that something indefinable is amiss; the Coca-Cola billboard in it has lost its right-hand half, or the advertisement plastered over it has lost half its message and revealed part of the logo of the previous advertiser. Either way, it is distinctly a sign of the times, and the times are, as Shakespeare had Hamlet say, out of joint. Given the cheerfully neutral quality of his daylight landscapes and most of his night scenes, it’s hard to say whether Walker’s identity as an African American artist contributes an extra meaning to this one particular choice of subject matter.

For Alfred Conteh, on the other hand, cityscapes are never neutral and seldom as cheerful as by rights they should be; his Two Fronts series of paintings, part of the retrospective at the Marietta-Cobb Museum of Art through June 17, add allegorical, ghostly African American figures to a cityscape that is haunted by darkness even when it gleams. As Conteh writes in his statement about this work, “The honest and false narratives of history embodied in this series are primarily personified in patinated colossuses that commemorate the people, culture, and battles that the populations they tower over have fought and continue to fight.”

And now that we have completed a journey from neutral beauty to an acknowledgment of darkness in the Southern land and cityscape, it’s fair to end with Larry Jens Anderson’s stunning proposal for a public art exhibition, part of the Magic group show at Kai Lin Art through June 15. Anderson’s Necktie Party places nooses around the necks of three Confederate monuments, a shockingly potent reminder that although it was assumed in the wake of what the North called the War of the Rebellion that its perpetrators would be placed on trial and hanged, history took a very different course instead. But that is another story, and a different landscape. 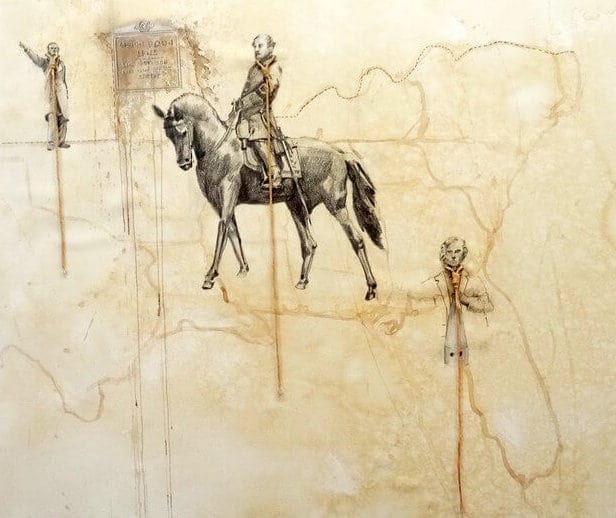