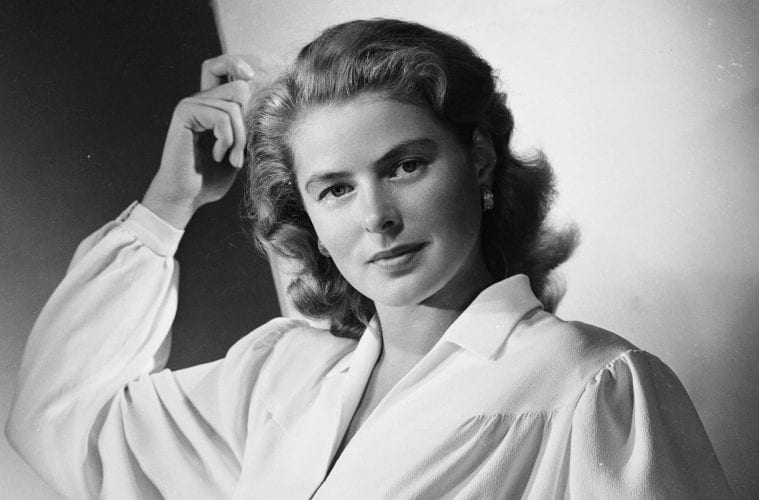 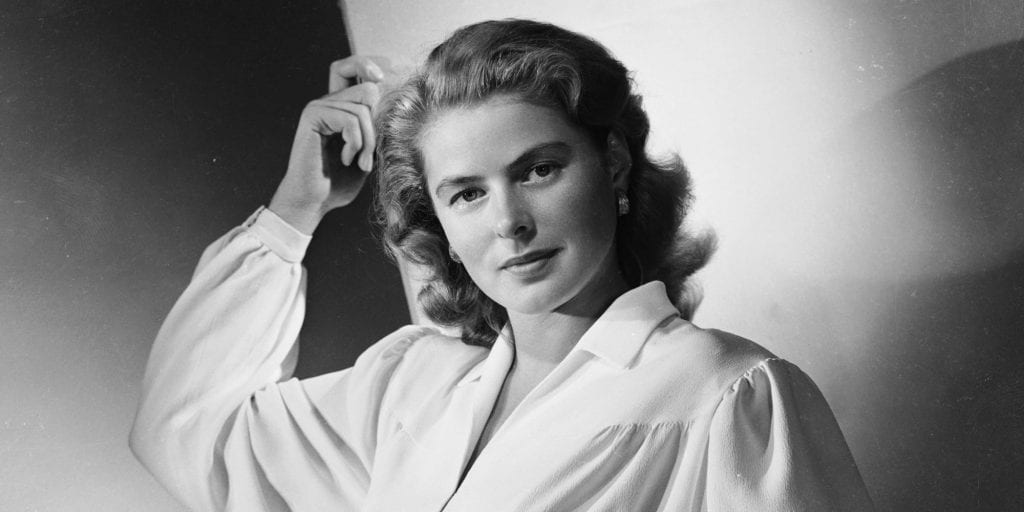 Ingrid Bergman had an elusive on-screen persona that echoed her real life.

It’s hard to imagine Downtown Abbey’s Dowager Countess collecting her poop in plastic trash bags. Or hearing strangers complain about her vile body odor. Or, when they do, retorting that she was famous as a girl for cleanliness, “particularly in the unseen places.”

If nothing else, The Lady in the Van gives the estimable Maggie Smith a chance to descend from the silver-teapot-and-porcelain-tureen stratosphere of the Western world’s most popular nighttime soap. The movie reminds us she has much earthier comic chops in her arsenal than just those withering Downtown put-downs.

Based on the “mostly true story” that playwright Alan Bennett spun into a 1999 stage hit starring Smith in London’s West End, Lady presents her as Miss Shepherd. That may not be her real name. A longtime nuisance of Bennett’s gentrifying Camden Town neighborhood in the 1970s, Miss Shepherd lives in a broken-down van that she inveigles passersby into pushing while she steers it toward the latest available parking space. 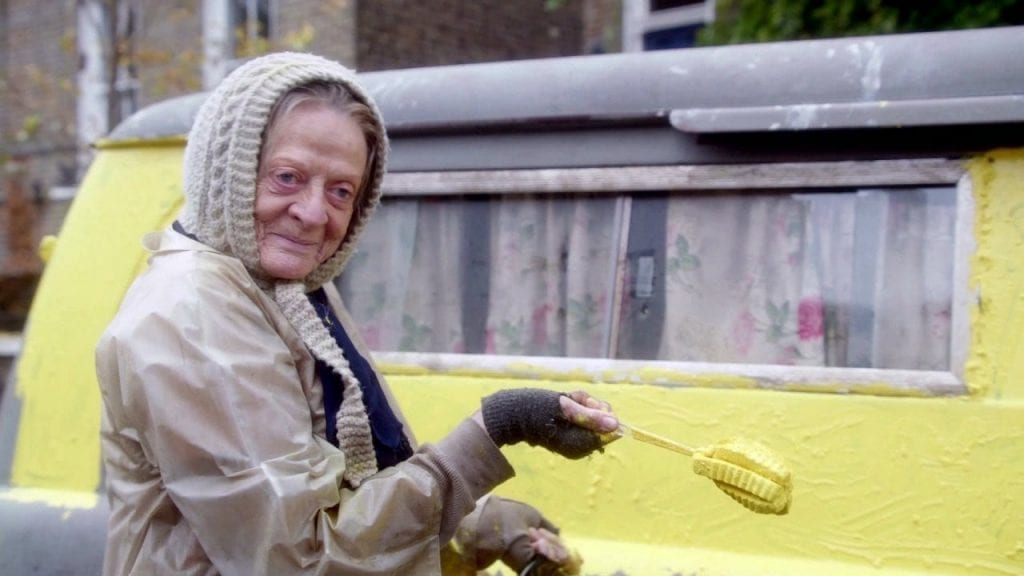 A new homeowner in Camden, Bennett (played by actor Alex Jennings) takes interest in Miss Shepherd’s religious and political pronouncements, her claims that she was once a nun, and her unexpectedly fluent French.

A neighbor (Frances de la Tour, one of many veterans of Bennett productions who make cameos here) says the vagrant would make a good subject for “one of your little plays.” That line is where Lady in the Van starts to go meta, get navel-gazy and wobble on its axis.

This probably made more sense onstage, but the movie gives us two Alan Bennetts (the one who writes, and the one who lives life). In Jennings’ dual portrayal, they bicker about turning other people’s experiences into dramatic material. The point, spelled out explicitly, is that the gay but shy playwright doesn’t have much of his own life to draw on. The crazy old lady is a prime source. So is his own mother (Gwen Taylor), who starts to fade into dementia around the time Bennett allows Miss Shepherd to park her van in his own driveway, temporarily. (She remains there 15 years.)

Scripter Bennett draws parallels between Miss Shepherd and his Mam, as he calls her. And he frets about his lack of a sex life that doesn’t require payment. (Miss Shepherd assumes the young men traipsing in and out of his house at night are Communists.) But the film’s strongest focus is on the homeless woman and her eccentricities. Miss Shepherd accepts Christmas presents and gifts of homemade meals with suspicion rather than gratitude. And the sound of classical music sends her into panic.

Naturally, this dysfunction will be explained by a dramatically traditional big reveal about the woman’s previous life. That’s facilitated by a former policeman named Underwood (Jim Broadbent, underused) who lurks around the edges of the story and may be blackmailing Mrs. Shepherd. The character and dramatic tropes that come with him give the movie a musty whiff of the mid-century well-made-play.

Oh well, The Lady in the Van is still worth seeing if you’re a fan of this sort of comfort-food slice of (semi-) modern England. And you’ll never waste time watching Maggie Smith, reliably grand even when mired in delusion and filth. She’s also quite moving in moments of fear; we see the panicked animal in her eyes.

Bennett has been successful throughout his stage career for big-cast plays (The Madness of George III, The History Boys). But for me, his best dramatic work remains his series of one-person monologues, written for TV, Talking Heads. In these, the characters speak directly to us and unknowingly reveal about themselves everything ranging from unsuspected depths to hilarious shallowness.

Smith’s solo turn as a lonely, alcoholic minister’s wife in A Bed Among the Lentils is worth checking out on YouTube. These short, contained plays show us how the deepest despair can be as funny as it is moving. That’s a trick that The Lady in the Van doesn’t manage to pull off.

If you love great screen and stage actors like Smith, you may be interested as well in Ingrid Bergman — In Her Own Words, a loving documentary by Stig Björkman. It uses on-the-record radio, film and television interviews, as well as private diary entries read in their original Swedish by Oscar nominee Alicia Vikander, to fill in the public and personal life of the great actress.

Oh, and there are clips, glorious clips — from Bergman’s films and even more profitably from a wealth of family photos and home movies spanning much of the 20th century. The movie reminds us that she was one of a kind onscreen, with an elusive persona unlike any other actress then or now.

She could be simultaneously worldly and virginal (consider her accidentally adulterous, patriotic Ilsa in Casablanca), even literally saintly (playing Joan of Arc for director Victor Fleming). In a wordless, color screen test when she first arrives in Hollywood, she burns with paradox: youthfully ripe yet sophisticated, alluring but innocent. 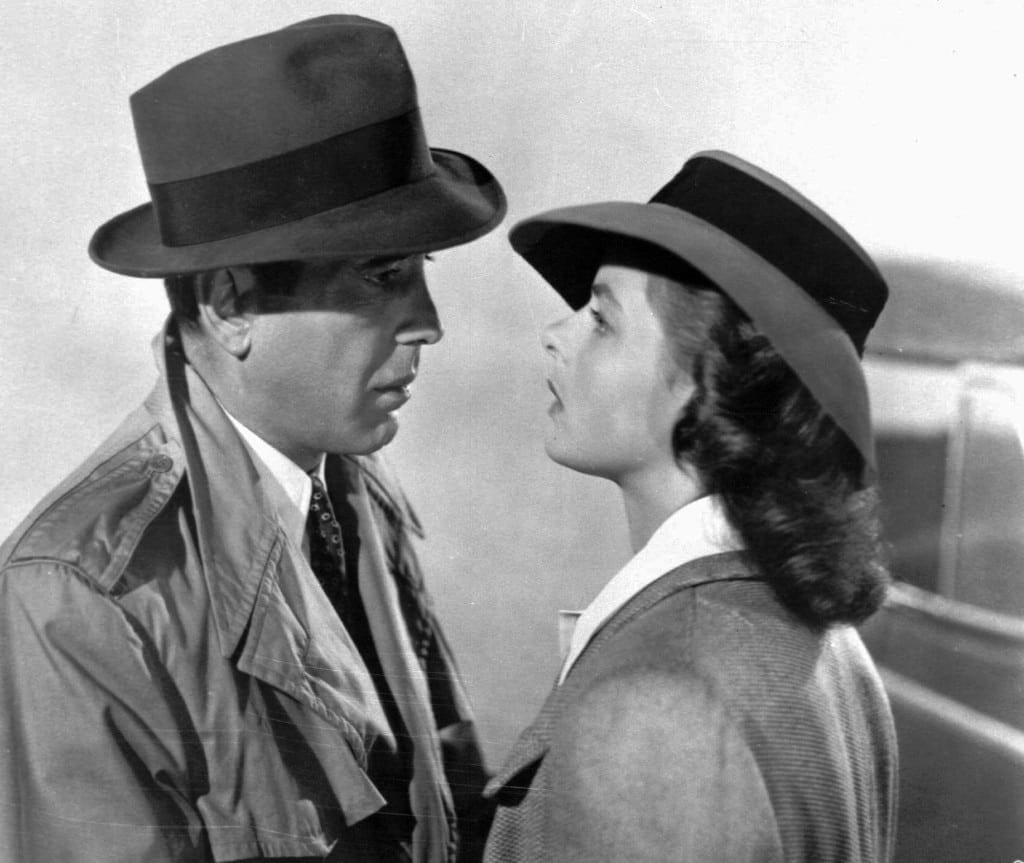 We learn that Bergman’s response to the camera was nurtured by her doting father, who died when she was only 15 but, until then, filmed her incessantly. It’s suggested in the film that her entire life on camera was an attempt to please, delight and even seduce her dad (a psychologically plausible if unsettling theory).

That initial Hollywood screen test shows us everything we need to know. In retrospect, it seems funny that Hollywood’s (and by extension the U.S.’s) moralists could be shocked, shocked when Bergman left her nice dentist husband Petter and daughter Pia for the un-movie star handsome director Roberto Rossellini, whose neorealist works Open City and Paisan moved her with their emotional directness.

Ironically, collaborating with her second husband, Bergman learned that her personal response to those raw, improvised movies clashed with her needs as an actor for a more structured, traditional approach. Some movie buffs may walk away from In Her Own Words feeling a little shortchanged.

It’s good to hear Bergman’s take on the non-matinee-idol Humphrey Bogart as her co-star in Casablanca, and it’s fun to see her playing around with Alfred Hitchcock, whom she loved. (Rightly, since he cast her in one of his masterpieces, Notorious.) But there’s not a whole lot of film or career analysis here. The movie increasingly becomes a family drama.

Bergman’s heart changed a lot, and often. So did her country of residence. First Sweden, then the States, then Italy, France, back to Sweden, then London. The documentary oftentimes plays like a mid-century European travelogue as we watch her raising her children, now four: Pia Lindström, the Rossellinis — twin sisters Isabella and Ingrid — and Roberto Junior.

All four are onscreen, speaking directly to the camera about their beloved, sometimes exasperating mother. They adored her. But they alternately felt blessed and shortchanged that (as Bergman herself put it) she felt more like their friend than a parent, and had no qualms about leaving them on their own for months.

But what do you expect from someone who was straightforward about her own desires and freedom? (“I don’t demand much, I just want everything,” reads an onscreen quote.) In the end, the documentary turns into a love letter from adult children to the mother they wish had loved them more — or at least differently.

Ingrid Bergman — In Her Own Words. A documentary by Stig Björkman. Unrated. In English and other languages, with subtitles. 114 minutes. At Landmark Midtown Art Cinema.