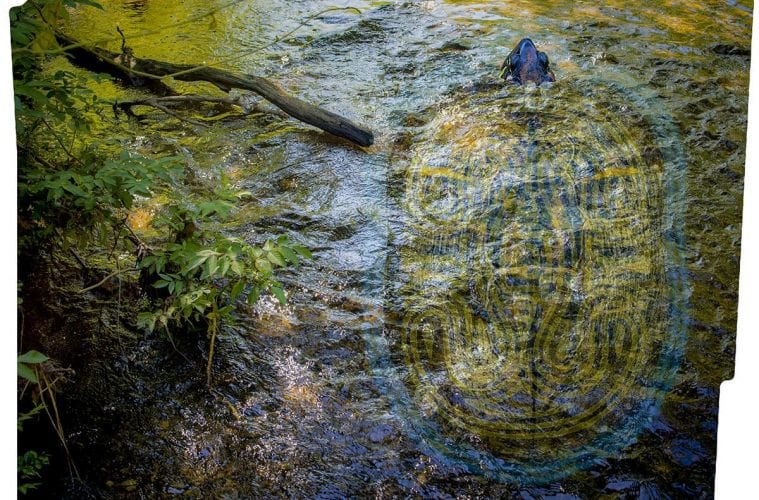 Review: Judy Henson pays homage to the art and culture of our region’s indigenous Americans

Part three of Poem 88’s summer Correspondences series, Judy Henson: Swift Creek, pays homage to the art and culture of indigenous Americans from our region. The series of brief but smart exhibitions began with Art Vandenberg’s Steles and continued with Scott Silvey’s Soft Borders and a performance by Shana Robbins and Julie Travis. The impetus behind the events are the ideas of Swedish scientist, theologian and philosopher Emanuel Swedenborg (1668–1772). Each brief exhibition proffers optimism with the aim of countering negativity. As well as suggesting an actual waterway, Swift Creek refers to pottery made from the 1st century BCE to the 9th century CE in Georgia by groups of Woodland-era Native Americans. Fragments of pottery with linear decoration are among the scant record of these cultures left behind. These motifs consist of dense, knot-like patterns carved first into wooden paddles that were later impressed into clay forms. Though bordering on nonobjective, they loosely reference natural phenomena.

Henson’s research shows, as does her background in exhibition design and writing. She combines photographic imagery of nature with appropriated designs from Swift Creek culture for her 2-D work, layering images into rich abstractions and digital collages. Island (2017) shows a close-up view of a turtle underwater on top of which is superimposed a motif lifted from pottery decoration. The gold-hued symmetrical network of lines plays against the organic rhythm of light flickering on water below.

Similarly, Owl’s Ladder: Hahn Woods (2017) features its titular bird against the surface of a body of water. Reminiscent of Island, the owl’s feathers are rendered translucent, mingling with the pattern of the layer beneath. Significantly, Henson not only borrows motifs, she emulates the process of abstracting from nature albeit with markedly different tools. Indeed, Henson’s show continues the theme of nature and technology that has been omnipresent throughout Correspondences. Not only does she work digitally, her images are printed onto aluminum and cut into meticulously irregular shapes. Laudably, she breaks the square format conventional to Western art. A series of four one-of-a-kind boxes are simultaneously playful and serious, drawing inspiration from natural history exhibitions. Carried by the Creek, for example, shows a map of the topography around Peachtree Creek in Dekalb County. Images of flora and fauna and ephemera — such as a fragmented CD that itself shows a map of Iraq and its surrounding area — creates a complex network of visual information and histories. Site: Sandbar Excavation employs a similar map printed on glass. Underneath are collected shards of discarded glass made smooth by years of aquatic erosion.

Perhaps most indicative of Henson’s background is the presence of framed didactic and interpretative text. At first it seems out of place inside an art gallery — information and poetics are at odds, right? But it gives crucial insight into the exhibition and the histories from which she draws. Most valuably, it gives brief insight into southeastern Woodland-era Native American art. It makes her act of appropriation more meaningful and more educational — directly manifesting the progressive goals of Correspondences. Swift Creek, and Correspondences, closed August 5.