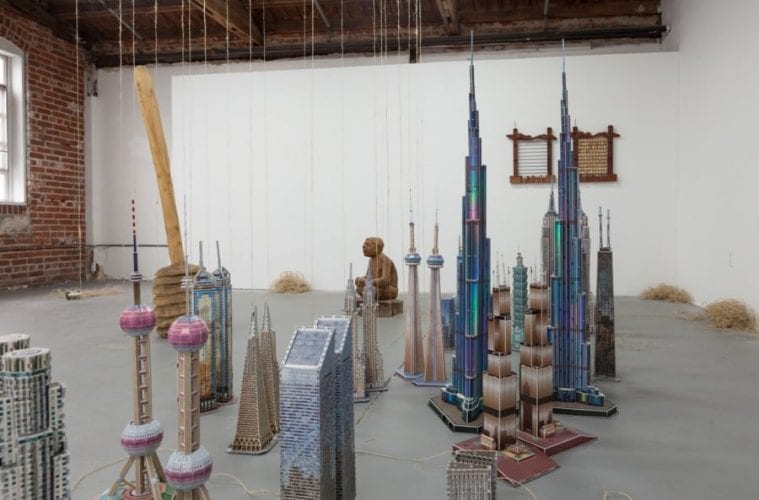 Review: Joel Dean’s “Powers of 7-8-9” is a glorious exploration of binaries

Joel Dean’s Powers of 7-8-9, at Species through December 31, is one of the most gloriously excessive explorations of binaries, or maybe just of two-ness, in town. (Does it matter that Dean, raised in Atlanta in the 1990s and now an artist in New York, is himself a twin? Perhaps.)

Dean has been deeply inspired by the ideas in Jean Baudrillard’s lecture “Requiem for the Twin Towers,” on the meaning of the twin towers and their toppling — which Baudrillard linked to the transmutation of capitalism from competition into “networks and monopoly” — and Dean’s reading of it has given rise to his growing City of doubled or twinned model skyscrapers (each one constructed from a three-dimensional puzzle set). This collection of pairs of identical alternatives is complemented by Twin Tower Mathematics, a pair of wall-mounted twin abaci (the seldom-used plural of abacus), one of them completely filled with beads so that it cannot be used for computation, the other completely empty of beads so that it, too, cannot be used for computation. They form the perfect binary opposition, A and Not-A, or an exercise in identity and difference in which both sets, the empty and the full one, turn out to be equally useless.

This elaborate exercise in binary mathematics also recalls the binaries of Sigmund Freud’s fort-da game  and Jacques Lacan’s tale of the children reading the railroad station’s bathroom signs  (“We’re at Ladies.” “Idiot! Can’t you see we’re at Gentlemen.”). The sets of skyscrapers can be read by determined Freudians either as a veritable forest of maleness or a set of suggestive slits formed by the gap between each pair of twin structures, and from there, the notion that architecture is a symbolic language leads us quickly into Lacanian territory. 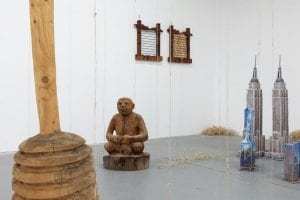 If the Freudian dimensions of this show were in question, any ambiguity is removed by the adjacent pair of wooden sculptures, one of a boy seated cross-legged, the other of a human-sized (about 5-plus feet tall), emphatically phallic honey dipper, a pair presented under the title No Body Can Say No. Both are surrounded by coarse strings stretched floor to ceiling, forming a sort of cage with just enough room between the thin bars to allow a viewer to slip through. This looks like the prison of sexuality itself rather than constructed gender, although the prison is flimsy or illusory, so maybe not; and given the prominence of “No . . . No” in the title, are we supposed to think about Freud’s essay on negation, the idea that for the unconscious, “yes” and “no” are not really an opposing pair? (After all, this might be at the root of our present “post-truth” political climate.)

I don’t think so, but frankly, I’m not sure. When you start with Baudrillard, you end up in increasingly strange intellectual terrain, and this is an interesting place to go, regardless of the lack of respect shown to Baudrillard these days in fashionable philosophic circles. 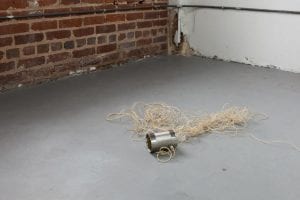 The presence of a Tin Can Telephone, in which communication between the binary opposition of the two sides can only be carried out via an extremely dubious string connection, further suggests that this show is a meditation on the problematic nature of language and how people use it, but also on the intrinsic problem of two-ness, always collapsing into an undifferentiated, monolithic unity or obscuring the complexity of situations in which there are always more than two sides to every question.

Throw in The table is set, so now eat, a three-legged table on which the missing fourth leg has been cut into portions served up on white plates, and Architectural Digest, a single model building laid aside in a wastebasket, and you have an over-the-top piece of witty theorizing that is a worthy successor to the theory-laden ATLBNL that closed at the Atlanta Contemporary an hour before this show opened in the art center’s Studio 4, which morphs at regular intervals into the Species gallery space.

What all these sets of dualities add up to is left for the viewer to puzzle out. The prison of gender is there to be stepped out of, apparently, and the utility of a binary system for anything but computer languages is called into question. The unique doubling of the fallen twin towers (the model buildings in City are one-of-a-kind structures turned into twins by the artist) feeds somehow into this larger problematic.

But the oddity is that given the evidence, the exhibition seems to be about almost anything but the possibilities I’ve laid out thus far. The incomplete artist statement that Species’ owners called on Dean to rephrase in a “grunting, stupid, but honest language” deals almost entirely with the twin towers as a symbolic expression of a two-world-power competitive opposition that became meaningless in a world being turned into a single interlinked economic and social entity.

That vision of irresistible globalization suddenly seems dated in the face of the new face-off of multiple powers in which, to paraphrase what a European political thinker said last week, “nations are ceasing to resemble one another and starting to look distinct again.” The fact that binaries are blurring in the realm of gender on the one hand, and that the world economy and the global climate remain immense unified systems on the other, complicates the present-day drive toward division, but a global unification that once seemed inevitable has suddenly come to a painful halt.

It feels like Joel Dean has done his best to create symbols that grapple with this peculiarly difficult moment in world history. But if so, he has left us to assemble the puzzle parts for ourselves. He leaves us with a world in which the unified logarithmic scale that Charles and Ray Eames explored optimistically in their 1977 film Powers of Ten (which inspired Dean’s exhibition title) has been succeeded by less perfectible ways of getting from zero to, if we are lucky, nine.