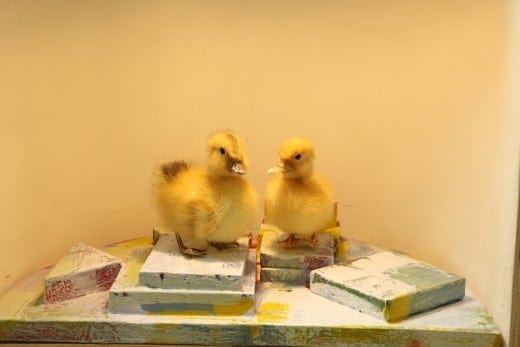 Who would believe that there is common ground among the safari-like dioramas of the American Museum of Natural History, David Byrne’s Talking Heads and little baby chicks (the adorable, fluffy kind some of us remember from Easter baskets or being huddled beneath heat lamps at feed stores)?

Atlanta artist Joe Peragine would, and so will you after visiting his engagingly personal exhibition of painting, photography, drawing, map-making, taxidermy and dioramas at Marcia Wood Gallery through October 10.

The 50 works in Love Me Till My Heart Stops, which takes its title from the lyrics of a Talking Heads song (And you love me till my heart stops/Love me till I’m dead…), focus on different ways of envisioning nature and depend heavily on nostalgia. Somber as some of it may be — and I’ll get to that later — it feels like a celebration.

Since 2010, Peragine’s work has reflected his interest in taxidermy and natural history dioramas. He draws inspiration from many childhood hours spent at the American Museum of Natural History in New York and continued engagement, in research and travel, with natural history museums around the world.

Peragine assumed the roles of director, photographer, landscape painter and even taxidermist in creating his dioramas. He cares deeply about the little animals that he has preserved, many of which were stricken in his own backyard. His love is infectious, and it elevates his attempts at taxidermy beyond nostalgia. His taxidermic missteps only serve to humanize the work.

Sure, taxidermy is a skill, but is it art? In Peragine’s case, it is.  The best of art often delivers something personal or familiar in a new light, be it an idea, a memory and even a squirrel. The aptly named Squirrel Coat (2015), in which a pest becomes something almost regal, exemplifies that transformation.

Trust me when I say that you have never seen anything quite like it. This squirrel, frozen in the half-transformation of an attempted taxidermy effort, while humorous, is the opposite of funny, though it is hard not to laugh at its stuffed, mummy-like body sporting the squirrel cape it seems to drag behind him. Careful consideration, though, stirs a deeper reflection. Maybe we all wear our own exteriors like a squirrel coat, walking around beneath something that identifies us but isn’t really who we are.

There is no element of carelessness or lack of regard in Peragine’s nearly botched — okay, botched — preservation of the squirrel. Quite the opposite. He doesn’t pretend to give new life to an animal as some taxidermists claim. He believes that his poor taxidermy skills only serve to reinforce the reality that the animal is dead and gone. What saves him is his respect for the animal and the process. In his statement, he writes that though “the end result may possess a dark humor, I don’t treat the process frivolously.”

He isn’t afraid to hide his efforts and, as in Squirrel Coat, his attempts at creation and preservation are front and center. He even alludes to them in After … Snare ( 2015), a mixed-media taxidermy diorama in which a plaster replica of the artist’s hand holds the puppeteer’s strings to a dangling taxidermied chipmunk (incidentally, being returned to nature by a larger-than-scale white ant that will be instantly familiar to anyone who has seen his delightful parade of ants at the Atlanta airport).

Peragine believes that the great dioramas tap into our innate capacity for nostalgia. He breathes life into the source of his childhood obsession with eleven gorgeously rendered paintings in acrylic and resin, recreated from photographs the artist made of real-life dioramas at the AMNH. These blurred visions perfectly capture the fleeting, ineffable nature of memory as only the essence of the thing remembered. In memory, as in these luscious paintings, what remains is just a hint of the real thing, made so much more powerful through the lens of time and distance.

Most beautiful of these, and they are all powerfully beautiful, is AMNH: Cougar (2015), in which the eponymous creature, sheltered in a cave, looks out onto the sublime beauty of the Grand Canyon.

The artist breaks our hearts with five black-and-white reproductions of archival photographs of decommissioned taxidermied animals from the museum in various states of brokenness. Each is labeled by name and catalog number, with a final directive: “Destroy.” Think of those horribly painful commercials of sheltered and soon-to-be-euthanized-if-you-don’t-step-up-and-save-them cats and dogs who look longingly and directly at you from behind the bars of their cages. These are every bit as effective. Somehow, in their verisimilitude, they are even more lifelike, and their demise, a second time, more tragic.

Peragine’s wit shines in two drawings opposite these photographs. AMNH map is the artist’s reproduction of the Hall of North American Mammals, which houses the dioramas from which he made his paintings. The original was drawn by the museum’s Department of Arts and Preparation in 1937 and revised in 1941. Mimicking the wording and graphics of the “real” thing, Peragine has created a companion map of his own, this one of his work as it is arranged in the gallery.

The main gallery houses all but one of his five dioramas, several taxidermied animals under glass domes and all manner of paintings, large and small, that he has made from them. Note the pairing of his diorama White Rabbit – Alaskan Diorama, (2015) with Alaskan Brown Bear Diorama, (2015), a large oil on canvas, both of which depict the same white rabbits. White Dome (2015) one of the stronger iterations in the room, captures some of the blurred feel of memory shared by the more evocative acrylics in the back room.

Upon first consideration, I wondered why the artist felt compelled to put so many paintings in one show — the main gallery is hung salon-style — but between my first two visits I listened to This Must Be the Place, the happy, bright Talking Heads’ song from which the lyrics in Peragine’s title and statement come. And then I got it … it is above all a love song. Under its influence I experienced all these almost-storybook animals through Peragine’s unique blend of humor and pathos.

The diorama, which literally means “through that which is seen,” seems the perfect medium to consider his twin themes of nostalgia and homecoming. Peragine portrays his animals in ways that never diminish their individuality or his deep respect for them — never for money, always for love…. He employs his many and varied portrayals of animals to exemplify the very human attempt to understand and explore a passion. I, for one, hope he continues to take us along for the ride.

The artist will give a talk at the gallery at 11 a.m. on September 26.