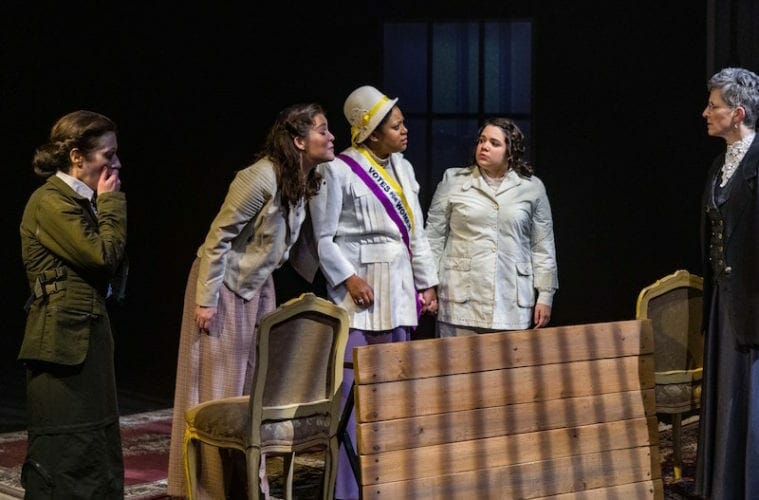 The company of "Bull in a China Shop" features (from left) Daryl Lisa Fazio as Mary Woolley and Alicia Kelley as Jeannette Marks, with Falashay Pearson, Sofia Palmero and Dina Shadwell. (Photos by Diane Haymes Photography)

Review: It’s Mary Woolley’s world and with “Bull,” Out Front Theatre welcomes you to it

The opening lines of Bull in a China Shop — at Out Front Theatre Company through February 15 — are almost ridiculously blunt, direct and off-putting.

“I’m a bull in a china shop,” announces Mary Woolley, wearing a 1900s-era dress, her hair pinned back. The strength in her voice and the swagger in her step suggest a character with a perception far more modern and open than her costume. And the fact that Woolley has just told us the meaning of the play’s title, rather than waiting for the metaphor and its meaning to emerge, puts us on alert. This is a play and a character that make their own rules.

Playwright Bryna Turner’s Bull tells the true story of Woolley (1863–1937) and her lover, Jeannette Marks (1875–1964). Woolley was  the first woman to attend Brown University and, in 1901 at age 38, became the first female president of Massachusetts’ Mount Holyoke College. She held the job for 36 years, and her favoritism toward Marks, a former student whom she appointed to Mount Holyoke’s staff, caused tension on campus. Additionally, Woolley’s view that women’s education should do more than just create marriage-ready wives was seen as revolutionary. It’s rich material, solidly delivered. Playwright Turner is a Mount Holyoke alum, so the moments of romance, frustration, confused identity and schoolgirl longing that are peppered throughout feel genuine. The language is contemporary, even if the setting spans the years 1899 to 1937. It allows for the modern, forward-thinking women of the era to still read like rebels.

Daryl Lisa Fazio plays Woolley as a bristling, intelligent and secure boss itching for a fight, and she’s just damn fun to watch. Her character commands every scene, stomping in with boots, having no time for propriety and nonsense. Woolley drags us and her fellow characters into a better future, not waiting until the world is ready for change.

Fazio leavens her character with moments of uncertainty, though, particularly in her romantic relationship with Marks (Alicia Kelley).

If Woolley is Bull’s hero, Marks is its heart and our touchstone. She watches her lover live the bigger life, and Kelley is convincing at every point. Sometimes our idols don’t do what we want them to do. Sometimes our spouses work too much and take us for granted. The relationship feels very grounded, as our partners sometimes can inspire our awe, our lust, our anger and our frustration in the same conversation. Bull in a China Shop is a good love story about how complicated the power dynamic in a marriage can be, set against the struggle for women’s rights in the early 20th century. It does this with a female-only cast on a spare set and directed by Susan G. Reid. The play runs about 90 minutes with no intermission, spanning 38 years without really ever feeling like much time has passed. Scene breaks are punctuated by an onstage violinist.

Bull does have weaknesses. Supporting characters are given little chance to make an impression, with one notable exception. It never gives us a high-stakes fight, even though history suggests that the real Woolley probably had plenty. By and large, every character  is in fundamental agreement about their goals, even if they disagree on how to get there. It’s a show about revolutionaries who triumph and some audience members may long for more fighting.

Fazio never gets to lose her cool as Woolley, which seems disappointing when her work is so, so good. Oddly, the most brazen, show-stopping monologue goes to a minor character named Pearl (Sofia Palmero), a sweet, lovesick schoolgirl who’s fallen for her teacher.

Still, there’s much here to appreciate. Before seeing Bull in a China Shop, you may not know that someone like Mary Woolley ever existed. Afterward, you’ll be glad she did.