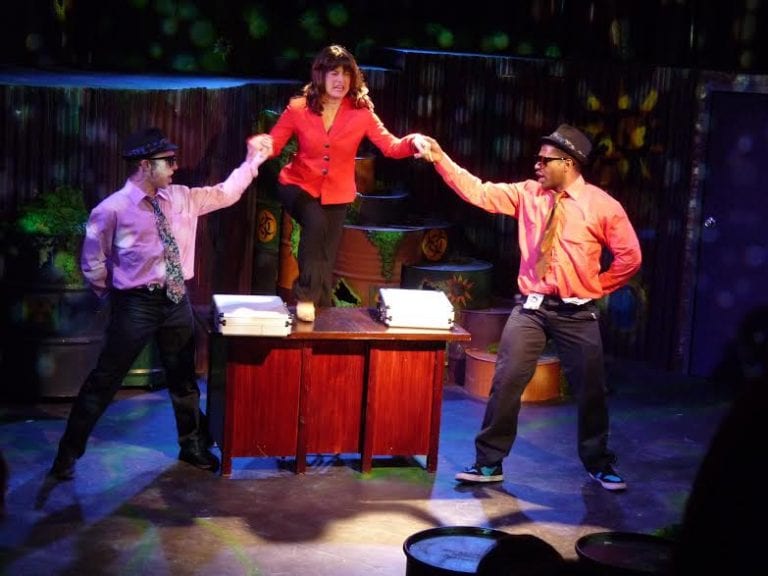 Leslie Bellair steals the show with dual roles in The Toxic Avenger. (Photo by Amanda Cantrell)

Review: Horizon’s “The Toxic Avenger” is one of the unsung super heroes of this theater season

Oftentimes theater gems can be found when least expected. It’s not the splashiest show around, or even the highest profile musical in town, but Horizon Theatre’s The Toxic Avenger is arguably the most fun to be had at a local theater right now. Running through March 13, it’s a thoroughly enjoyable piece of musical theater.

Based on the movie of the same name, The Toxic Avenger boasts books and lyrics by Joe DiPietro, and music and lyrics by David Bryan. It’s the same team that brought Memphis to life, yet this is a much different creature, a show not likely to worm its way into highbrow patrons’ calendar books.

In the city of Tromaville, a toxic waste dump off the New Jersey Turnpike, Melvin Ferd the Third (Nick Arapoglou) is a mild-mannered, nerdish guy who wants to be an earth scientist. He also naively wants to clean up the area. While investigating the city’s problem at the library, with an assist from Sarah (Julissa Sabino) — the blind librarian he secretly loves — he discovers some secrets involving Mayor Babs Belgoody (Leslie Bellair).

Out one night, he is attacked and pushed down a drum of waste by the mayor’s goons. He lives but emerges from the waste a green monster, with a deformed face but a superhero’s physique. And he has an axe to grind.

Sarah is pretty hot for the avenger after he rescues her one evening; she affectionately nicknames him “Toxie” and tells her friends about him in the number “My Big French Boyfriend.”

The musical, which won an Outer Critics Award for Best Off-Broadway Musical, doesn’t stray far from the cult 1984 movie. It’s campy and too-thinly plotted, but it’s made with exuberance and a tongue-in-cheek tone. It’s also full of zingers, with jokes about Michele Bachman and Mother Teresa, and an air of political incorrectness.

It’s a little perplexing how this musical, which bowed in 2008, has never gone on to much mainstream attention. What really elevates it is a score that is bouncy, addictive and clever.

The material may not seem like it would make a musical, but it does — and Heidi Cline McKerley directs the hell out of this. Mckerley has become one of the city’s most reliable, versatile directors, bouncing back and forth between musicals and drama, and she really delivers here. She and her husband, Jeff McKerley, handle the choreography, and the musical numbers have a crisp flair to them.

The five-person ensemble cast is delightful. Arapoglou gives Melvin a decency while his Toxic Avenger becomes a reluctant superhero. The actor is expertly suited for the role, especially a chase sequence where he hauls out a harmonica and plays it. Sabino, a standout in Actor’s Express’ Rent last year, is a warm presence who can also belt her heart out, while Austin Tijerina and Michael Stiggers — who play multiple supporting roles — are as appealing as they’ve ever been, fleshing out a lot of different characters, from thugs to hairdressers to a folk singer.

As adept as they all are, however, this is ultimately a showcase for Bellair. She is in top form, with a rangy vocal vocabulary and superb comic timing. Besides playing the mayor and capturing her in all her sordid, Joisey-accented glory, the actress also portrays Melvin’s mother, who has long been disappointed in him, even before he turned green and toxic.

In her number “Bitch/Slut/Liar/Whore,” both of Bellair’s characters face off at the same time and it’s one of the giddiest, most creative musical moments in recent memory. The song is a showstopper with catchy lyrics (“You’re a bitch, you’re a slut, you’re a liar, you’re a whore / Did I leave something out, let me think some more / You’re a tart, you’re a tramp, you’re as cheap as Demi Moore”) and Bellair nails it.

If she doesn’t win a Suzi Award for this, it will be a Tromaville injustice.

The second act seems a little anticlimactic and at times Toxie become a secondary character in his own musical. Nonetheless, even when the narrative stalls, the score doesn’t. Another engaging number is “Choose Me, Oprah!” with Sarah and her vampy back-up singers, Diane and Shinequa (Tijerina and Stiggers), detailing an idea for a memoir.

Anyone looking for high art or a message should look elsewhere, but musical junkies and those with an adventurous streak will eat this up. Aurora Theatre’s Wit moved me, and the Alliance Theatre’s Disgraced made me think (and think), but The Toxic Avenger is the production that slapped a goofy smile on my face.