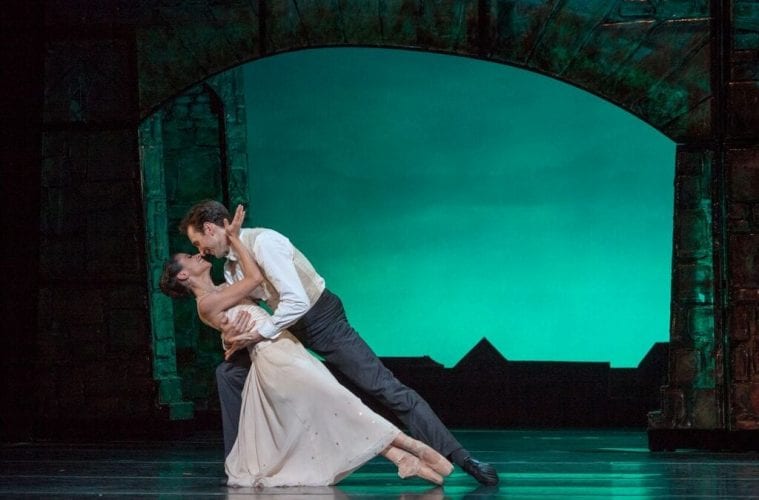 Review: Atlanta Ballet’s “Moulin Rouge” is a guilty pleasure with a few too many empty calories The evening-length work is not only quintessentially French, but stereotypically so. From the flamboyant tailors, to lustful courtesans, and the ubiquitous Henri de Toulouse-Lautrec, the piece drips with post-Impressionist images that typically adorn college dorm rooms and wannabe bistros.

Since its 2010 Atlanta premiere, the two-plus hour ballet has undergone several changes, and its current performers are braver and more virtuosic than ever. But their collective range and technical capacity is largely untapped in this work; the spoon-fed plot lacks depth, and the live musicians are underutilized.

Moulin Rouge — The Ballet tells the story of Matthew and Nathalie, danced by Christian Clark and Nadia Mara, who try to forge a romance amidst the frivolity and opulence of Paris in the 1920s. In an early scene, Nathalie finds herself engulfed by coquettish women who vie for a position at the infamous Moulin Rouge, often at the expense of their pride and integrity. Rachel Van Buskirk (center) is one of the stand-outs in a production marked by elaborate period costumes.

Zidler, the music hall’s owner and chief lecher, danced menacingly by Jonah Hooper, becomes deplorably entranced by Nathalie. So begins the fateful love triangle: the ill-fated trajectory for the evening.

The costumes are lavish and evocative while the sound score is a “greatest hits” collection of important music from composers such as Ravel, Massenet, Debussy, Strauss and, of course, Offenbach. The movement and music fit accordingly: hand in glove.

Morris’ sensitivity to each composition’s energy is certainly noteworthy if not commendable. But the movement exploration feels incomplete. The leads — namely Mara, Clark, Hooper, John Welker and Rachel Van Buskirk (in a flaming red wig) — enthrall, as does Coco Mathieson.

Yet for a professional ballet company, these triumphs are de rigueur: this is standard classroom material. The dancers can do … much more. Aside from the can-can and heel stretches that signify the golden era of the Moulin Rouge, little else is culturally relevant or significant as an identifier of Morris’ choreographic proclivities.

There are stunning, memorable moments. At the close of Act I, “Claire de Lune” lulls us into a dreamy world as Clark and Mara dance on and within the most striking set of the evening. The technically brilliant Mara captures love’s radiant glow, and makes us believe that even her whispers have tremendous power.

Combined with Clark, their subtle gestures, gossamer arms, and sincere eyes intertwine with the pale blue light that radiates from behind. They conclude their duet on a bridge, gazing at one another, then into the distance. What they share is profoundly intimate, moving in its simplicity, and totally believable. Act II treats us to another engaging moment in the Tango Café. Five couples twist, turn, jump and throw one another in fits of dynamic, sultry attraction. Fast and fiery, the moment offers a rare glimpse into the ferocious and captivating power of the accompanying dancers, who are sadly underrepresented. All too often, the women decorate the stage by kneeling on one knee and shimmying their skirts. A lot. I suffered for them on the inside.

The final moments of the evening imprint tense and somewhat devastating images on our hopeful minds. The ballet careens to a predictable and melodramatic conclusion with welcomed heart-warming honesty. While I won’t reveal who dies in the end, I will suggest the death scene is of Shakespearean proportion.

As one of the dancers gasps for a last, nourishing breath, she still finds energy to eek out one final, beautiful leg extension to the side, one more pique attitude, one last pirouette before falling into eternal slumber.

Could this be a metaphor for this genre of ballet? Perhaps. Yet, there is no denying the power of a powerful story nor the impact it can have on large audiences. The question that remains is: Do we want something luscious to chew on? Something that has mystery and staying power — like that delicious, unidentifiable chocolate in the box? Or is the immediate satisfaction of cotton candy enough, provided we can stave off the guilt over the amount of sugar we digested?