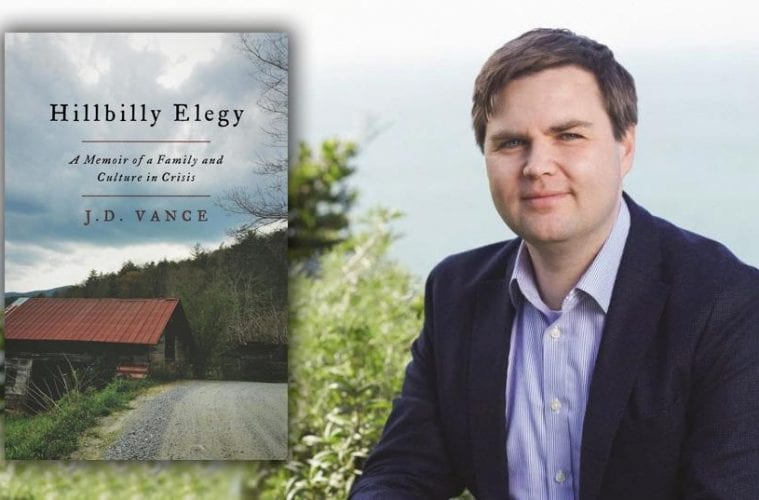 A sign of the times: the overnight success of J.D. Vance’s “Hillbilly Elegy”

When Hillbilly Elegy: A Memoir of a Family and Culture in Crisis (Harper, 264 pp) was published last summer, no one anticipated its future as a literary juggernaut, nevermind the basis for Ron Howard’s next feature film.

Six weeks into the book’s initial print run of 10,000 copies, the publicity manager at HarperCollins Publisher assured me that there would be no lecture tour for the author. And six months prior, the author himself — J.D. Vance, who was working at a biotech firm in the Silicon Valley — had warned his boss that he might need to take a week’s vacation from his job to promote his book.

But as Election Day drew closer, and the nation was forced to acknowledge the reality of millions of voters who were trapped in a cycle of downward mobility, the parallels between that demographic and the people depicted in Vance’s memoir were impossible to overlook. Within weeks, the first-time author became an ad hoc spokesperson for the disenfranchised. Those whose political involvement was animated by anger and frustration, who felt condescended by the press and ignored by politicians — their American Dream had devolved into an impossibility. And Vance, who’d grown up in poverty in the Rust Belt city of Middletown, Ohio, understood their pain.

Though he never mentions the reality TV star-turned commander-in-chief in his memoir, once Vance was dubbed the “Trump Whisperer” by media pundits, book sales skyrocketed.

One million hardcover editions of Hillbilly Elegy later — and even more audio and digital versions of the memoir — Vance is a seasoned veteran of the lecture circuit whose measured voice is welcomed from conservative bastions like the National Review to more left-leaning platforms like the Washington Post.

He started writing the book while enrolled at Yale Law School. As a Midwesterner and graduate of Ohio State University, he felt like a cultural outsider among a peer group who were rich in social and material capital. He reasoned that if other kids from similar backgrounds felt so alienated in places that are, ostensibly, the gate-keepers to future opportunities and upward mobility, the United States had a problem. As a Marine Corps veteran, he was equally troubled by the realization that certain regions and classes are overrepresented in the military, while others are grossly underrepresented.

“I wrote the book because I wanted to ask better questions and start a conversation,” says Vance. “Let’s appreciate that there are 40 or 100 different factors informing the problems [that working-class, white families are struggling to overcome] . . . and not pretend there’s one quick fix.”

A tall order, given the culture’s propensity for binary thinking. Whereas people on the left generally argue that barriers like poorly funded schools, inadequate health care and substandard housing are to blame for multigenerational poverty, folks on the right are more inclined to believe that social pathology stems from poor life choices and too few adults who are willing to take personal responsibility for their actions.

Both narratives are true, according to Vance.

“Political ideology rarely accommodates the fact that people are just complicated,” he says. “People like my grandparents, who were incredibly kind and loving, resilient, courageous in the face of obstacles.”

Vance’s elders grew up poor in eastern Kentucky coal country, and were part of a great migration that brought Appalachians north for high-paying factory jobs. Their stories are rendered with a rare blend of tenderness, empathy and brutal honesty in Hillbilly Elegy.

When drugs threatened to derail Vance’s future, for example, his grandmother, Mamaw, identified the ringleader and warned her grandson to cut off all contact. After she threatened, “I will run him over with my car, and nobody will know what happened,” in a menacing tone, Vance took her at her word and ended the friendship abruptly.

This was the same woman who’d once doused her husband with gasoline and lit him on fire after he’d ignored her warning that “if you ever come home drunk again, I will kill you.” (Fortunately, their daughter was on hand to extinguish the flames, leaving her daddy merely singed, not scorched.) No stranger to firearms, Mamaw kept 19 loaded handguns scattered throughout her home — which her family discovered after she’d died. And when Vance enlisted in the Marines, the recruiter (who knew the family matriarch) assured him that boot camp would be a cakewalk compared to life under his granny’s roof.

Hillbilly Elegy also takes a clear-eyed look at the multitiered problems in public education, where social pathology can flourish unchecked in underserved districts. “As a teacher from my hometown once told me,” says Vance, “‘They want us to be shepherds to these kids, but they ignore that many of them are raised by wolves.’”

The book beautifully illustrates how adversity can be a great teacher. Gratitude, compassion, common sense, humility and self-resilience are some of the more noble characteristics that were instilled in Vance as a boy. And his culture prized loyalty and fidelity to family — from not speaking ill of people in public, to defending their honor when necessary. (Appalachian justice is swift . . . though not necessarily informed by the U.S. Constitution.)

By the same token, Vance does not sugarcoat the fact that personalities forged under siege can traumatize children and leave them with a fight-or-flight approach to problem-solving, if not wildly disproportionate reactions to relatively minor infractions.

In a passage he called “the most difficult to write and share” while speaking at the Atlanta History Center this week, he recounted blowing up at his then-girlfriend/now-wife, Usha, storming out and staying away for hours to punish her. Finally, it dawned on him that he had a problem.

“I was a third-generation escaper,” he says, referencing his family’s pattern of fleeing the scene to avoid conflict. “[I] apologized profusely, and expected her to tell me to go F myself . . . that it would take days to make up for what I’d done . . . that I was a terrible person. [Instead] through her tears, Usha hugged me and told me that she accepted my apology, that she was glad I was OK, and that was the end of it.”

That simple act of grace was a revelation to Vance. He grew up believing that a sincere apology was tantamount to a surrender — and that when someone surrenders, you go in for the kill. Sadly, getting hit, yelled at, repeatedly put down by his mother, witnessing her being physically abused by partners and watching them do drugs or abuse alcohol were all part of his legacy.

“This chaos in the home is our culture’s very worst gift to our children,” says Vance, “and it’s a gift that keeps on giving.” Though, the dad-to-be has vowed to break that toxic cycle when Usha gives birth to their first child next week.

Kate Whitman, vice president of Public Programs for the Atlanta History Center, who has curated book talks and guest speakers for the Center since 2003, says the response to Vance’s talk was unprecedented.

After tickets to the May 16 event sold out, a second seating of 600 guests had to be added. Twenty-four hours leading up to the talk, the Center fielded over a hundred calls from people trying to score a ticket or two . . . or three.

“Politics have been good for book sales,” says Vance, “but . . . looking at one book to decide why the Presidential election was so close is an exercise in futility.”

Whitman acknowledges that the political divide may have driven sales, but Hillbilly Elegy deserves praise for kindling conversations that may not have been started otherwise.

“I heard from many people at the event that their church book club, civic group [and/or] entire family had read the book. So I also think some are reading [it] in hopes of finding a solution to some of the problems Vance addresses in the book.”