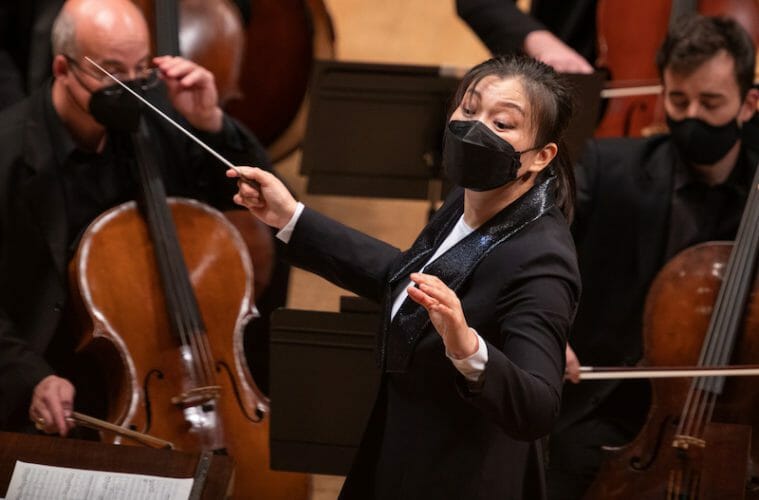 The energy of guest conductor Shiyeon Sung was somewhat muted by the mellowness of the program. (Photos by Rand Lines)

When one considers performances of music by the great classical masters, it is generally unnecessary to review the music itself — the piece’s legacy in the pantheon of great works is already secured and the composers themselves are not alive to receive and benefit from constructive criticism. Nevertheless, it is worth pointing out that Haydn’s Symphony No. 102 in B-Flat Major, the opening piece from the Atlanta Symphony Orchestra concert Thursday (the program repeats at Symphony Hall Saturday), is far from one of the composer’s most outstanding efforts. It is a simple, jaunty and largely forgettable affair, the sort of thing that a listener with no taste for classical music might envision when the genre is mentioned.

Such a milquetoast opener seemed to stunt the efforts of guest conductor Shiyeon Sung, who was clearly doing her best to enliven the laboriously mellow proceedings. Her highly animated, piercingly precise performance did bode well for the remainder of the evening. What would follow was a rather odd night in the canon of ASO performances — a series of smaller ensembles playing largely soft, pleasant works of minimal intensity.

To some extent this is something at which the ASO, especially its string section, generally excels: the sort of lush, sweet, crowd-pleasing tones that wash over the audience like the satisfaction that comes from eating a lavish meal. Seen in the context of the evening’s overall program, with its general lack of dynamics, these sort of moments go from being charming to pedestrian, losing their place within the larger framework of a more diverse set.

The second work of the night, Johann Baptist Vanhal’s Double Bass Concerto, offered the evening’s most stellar high point: a stunning performance by double bassist Joseph McFadden that was worth the price of admission in and of itself. Any player of the double bass will be aware of their David and Goliath relationship to an instrument that is as ominous and imposing in its physical presence as it is in the dark, thundering tones that it produces. 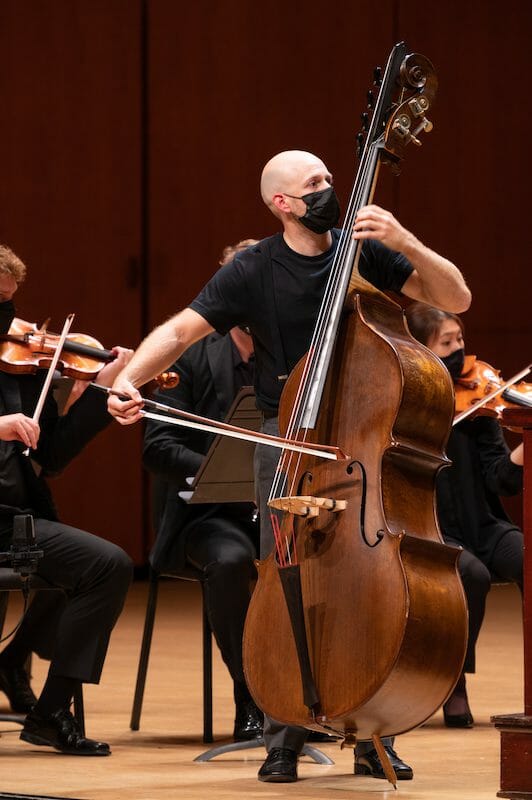 Double bassist Joseph McFadden put on a clinic on how to manipulate the sounds of his instrument.

It is an instrument that rages and strains against the command of the player, demanding a grip that stifles the wilder reverberations of its massive strings while still maintaining enough elasticity to allow for the necessary tones. A performance with the instrument, especially one of the Double Bass Concerto’s complexity, is a gauntlet thrown down in the gladiatorial arena of tonal control.

It is a challenge to which McFadden not only rose but conquered. His command of the double bass is that of a veteran lion tamer who wrangles a ferocious beast into seemingly effortless submission or of a master of sleight-of-hand magic who makes the impossible appear as an afterthought. It was truly a captivating sight to behold — the tones were full and rich but still charming and flirtatious — the sounds of an instrument acting in humble submission to the guidance of its player. McFadden’s playing guided the listener through a series of melodies that never failed to pierce into the soul.

It is worth considering that this sublime performance was happening amidst a series of pieces whose overall intensity was barely above a whisper and it was this conscious effort to maintain a mellow status quo that made McFadden’s performance all the more remarkable. It would have been all too easy to play the concerto with unbridled aggression and righteous fury, but to maintain a calm, dreamy tone on an instrument demanding such mighty command speaks even more greatly to McFadden’s skill as a player.

The evening would conclude, somewhat ominously, with a performance of Johannes Brahms’ Serenade No. 2 in A Major, Op. 16. It is an interesting choice for an evening defined by soft, gentle works, as Brahms is a composer that, even at his most genteel, still appears to have a ravenous inner turmoil raging just under his skin. As such his “serenade” still maintains a tense, unrelaxed atmosphere: a passage of plucked strings against a flowing melody line creates a quiet sense of mischief that borders on the menacing. A bass section that suddenly devolves into furious bowing suggests a person gripped by suddenly dark, sadistic thoughts. In this way, Brahms distinguishes himself as being far from lighthearted in even his most tender moments.

All in all, the evening was largely a success, the forgettable opening piece notwithstanding. Shiyeon Sung was a delight but criminally underused on material that failed to provide a forum for the intensity of which she is clearly capable. Joseph McFadden was easily the evening’s strongest point and one that the ASO would be well advised to utilize again and again in the future.