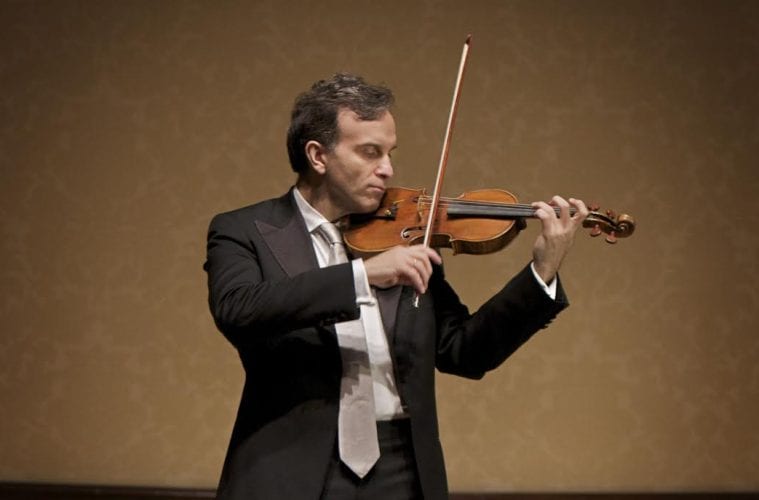 Shaham was one of the earliest performers to grace the Spivey Hall stage, performing there in its first full season (1991–92). Japanese-born pianist and composer Eguchi has been a long-time collaborator with Shaham — as witnessed by their 1997 album The Fiddler of the Opera, a fun collection of transcriptions drawn from opera on the Deutsche Grammophon label. The program performed on Saturday is one they have been on tour with this season, most recently as part of the Amelia Island Chamber Music Festival this past Thursday then on Friday at the Thomasville Center for the Arts in south Georgia just prior to bringing it to Spivey Hall.

Shaham and Eguchi opened the program with “Praeludium and Allegro” by legendary violinist-composer Fritz Kreisler. Written in 1910, it was one of a number of original compositions that Kreisler falsely attributed to other composers — in this case the 18th-century Italian violin virtuoso Gaetano Pugnani. It was a hoax that Kreisler successfully perpetuated for years until finally outed by New York Times critic Olin Downes over this specific work. Kreisler admitted it to be his own, and the scandal made news worldwide.

Despite that, “Praeludium and Allegro” is among the best of Kreisler’s works as a minor composer and remains a favorite of violinists. It was a fine curtain-raiser that outlined up-front Shaham’s assertive, well-grounded playing style.

Two contemporary works followed. The first of these was “The Singing Turk” by Boston-based composer Scott Wheeler. Commissioned by violinist Sharan Leventhal and premiered by her and pianist Randall Hodgkinson at Boston Conservatory in February 2017, it is Wheeler’s second sonata for violin and piano. Inspired by the eponymous 2016 book by Larry Wolff, “The Singing Turk” draws upon the notion of how Turkish characters were historically portrayed in European opera — specifically, in instances by Handel, Rossini and Paul-César Gibert. An effective new piece, it was perhaps the biggest musical challenge of the evening for the average concertgoer, though that was largely ameliorated by the convincing performance. It is certainly music worth revisiting by the interested listener.

Up next was “Nigunim” (Sonata No. 3) by Avner Dorman. Written in 2011, it was commissioned by Shaham and his sister, pianist Orli Shaham, for their Jewish Melodies program at New York City’s 92 Street Y.

The Hebrew word “Nigunim” is plural for “Nigún” (Hebrew: ניגון ; Yiddish: nígn), a fundamental Jewish musical concept, typically found in group song, which tradition says serves as a universal language. In his notes about the piece, Dorman says, “It ascends beyond words and conveys a deeper spiritual message than words can; a Nigun sung in Yiddish will reach and affect someone who only speaks Arabic and vice versa.”

Dorman initially set out to write a piece that explored music of the 10 lost Hebrew tribes that were driven into exile after the conquest of Israel — thus researching various Jewish traditions found in different parts of the world. To his surprise, Dorman found common musical elements across the Jewish diaspora, from North Africa to Eastern Europe to Central Asia. Although his musical gestures are borne from these common elements, Dorman did not incorporate extant Jewish melodies into “Nigunim.” Sections of the piece draw upon local non-Jewish musical traditions of each of these regions.

For example, the “Scherzo” second movement draws inspiration from Georgian folk music and from Macedonian dance in the final “Presto” fourth movement. In contrast, the two odd-numbered, slow “Adagio” movements evoked a spiritual, mystical joy of devekut — a Jewish concept of “closeness to God” or “clinging onto God” — a meditative state achieved in prayer, study of the Torah, or when performing the 613 mitzvot described in it. All in all, a worthy and substantial addition by Dorman to the violin repretoire, in a compelling rendering by Shaham and Eguchi.

After intermission, the program turned to two works that are essential to core violin repertoire. Shaham opened the recital’s second half with the Partita No. 3 in E major for solo violin, BWV 1006, by Johann Sebastian Bach, the final work in the composer’s set of Six Sonatas and Partitas, giving it the kind of thrillingly energized, well-stenciled performance Bach’s music deserves, played without hesitation between movements.

Eguchi then joined Shaham again for a late Romantic-era favorite, the Sonata in A major by César Franck. Shaham recorded it with pianist Gerhard Oppitz in 1989 for an album. Regarded as one of the finest works of violin repertoire, Franck’s Sonata is also noted for its difficult piano part, particularly the second movement that put Shaham and Eguchi on solid collaborative par with each other in a familiar work. Their performance was fittingly full-bodied, masculine in temperament, without being overdone in its most emotionally intensive moments.

Shaham and Eguchi returned to the stage for a delightful encore,  the “Graceful Ghost Rag” by William Bolcom. Originally a solo piano rag written in 1970 during an era of American ragtime revival, this was a version transcribed by the composer for violin and piano. There is a popular misconception about how fast rags should be played, and these performers did not fall for that, choosing instead the tempo of an easy, relaxed two-step which exuded a pleasantly nostalgic elegance.