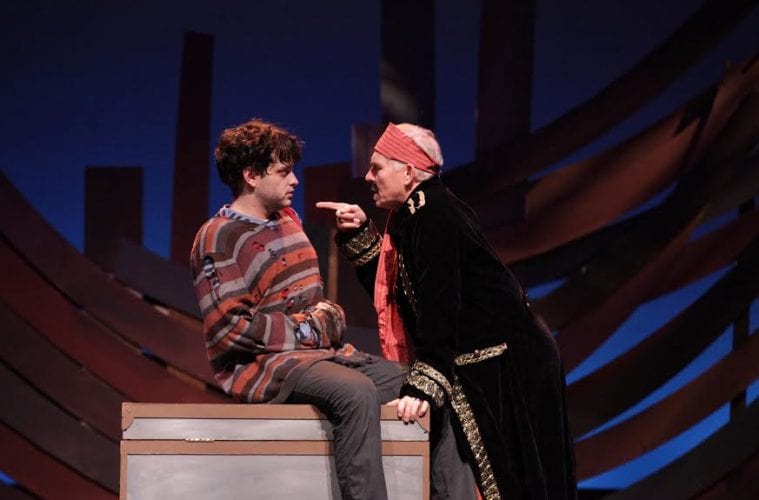 Review: With a self-conscious script, Georgia Ensemble’s “Peter and the Starcatcher” fails to lift Peter and the Starcatcher struggles to unearth the core of the story of Peter Pan. (Photo by Dan Carmody, Studio 7)

It’s hard to know what a kid might make of it, but I found the new family show Peter and the Starcatcher a noisy, unappealing mess. Rick Elice’s play, based on the book by Dave Barry and Ridley Pearson, was a hit on Broadway, garnering no less than five Tony awards.

The show tells the backstory of Peter Pan, filling us in on how Peter came to Neverland, how he got the power to fly, why he always remains a boy and so on. In spite of a colorful and competent production at Roswell’s Georgia Ensemble Theatre with a fine cast, the show doesn’t really manage to get off the ground, which is surprising considering its sterling reputation.

The tone of the show is puzzlingly facetious, and overall it’s wildly uneven, vaulting back and forth between low-level, vaudeville style high jinks and high-minded Victorian fairytale. Many of the jokes are impossibly anachronistic: I’m not sure what kids are supposed to make of Mae West imitations or one-liners about Philip Glass operas.

These would be forgivable if they were funny, but many of the jokes and references fall flat, and the cumulative effect of this sort of self-conscious wink aimed at the audience is that there never seems to be any real threat or anything genuinely at stake, which is a risky strategy to take when telling an adventure story. The pirates are thoroughly silly and bumbling without a smidgen of scariness, and all of the dangers seem cartoonish rather than real.

It’s certainly possible that children will be charmed by all of this, but that’s a big risk for parents to take. At a little over two-and-a-half hours, it’s a long show. If you bring the brood and the thing’s not fun for all of them, you’re in for a long ride. What’s more, the narrative is surprisingly complicated. I followed along, but I got the sense that many kids in the audience, and a lot of adults, were lost. And even if the wee ones are delighted by the fart jokes and potty humor, this may not be the sort of theatrical event you’re looking to share with them anyway.

On the plus side, I did admire the inventive take on the Peter Pan story; there is actually a charming fantasy adventure story buried somewhere underneath all the silly self-referential jokes. The show admirably brings to life some complicated story elements — a narrative that unfolds simultaneously on two ships, a high-speed boat chase, magical flight — through the use of some clever stagecraft and inventive storytelling.

Jeremiah Parker Hobbs as Peter does a nice job of bringing out the loneliness and longing that motivate the central character, and Molly Coyne’s energy and charm in the role of Molly Aster help propel the story. Designers Isabel and Moriah Curley-Clay give the action a great setting, and a drop curtain with a beautiful old-fashioned illustration of the mermaids of Neverland was hands down my favorite thing in the show.

But overall the script’s uneven approach makes for some tough going. It’s also worth pointing out that J.M. Barrie actually gave his character Peter Pan an origin story in the short work Peter Pan in Kensington Gardens in 1906, and that characters like Tinker Bell and the Lost Boys had their origins recounted in the original tale.

The show doesn’t follow the particulars laid out by Barrie himself. This sort of thing doesn’t bother me too much — creative license and all of that — but I think hardcore fans of the original might be justifiably miffed by the liberties taken. Michael Jackson (whose moonwalk, by the way, is inexplicably referenced in a stale Act II joke) wouldn’t approve.