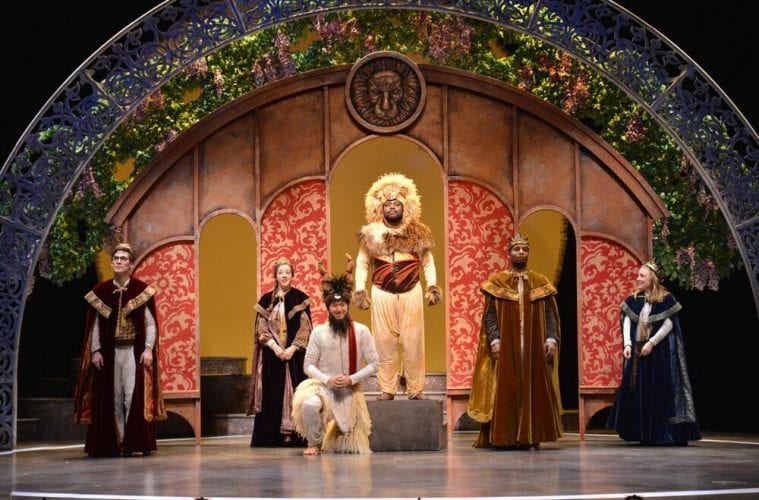 Review: The Alliance takes C.S. Lewis’ “Lion, Witch and the Wardrobe” on a magical ride 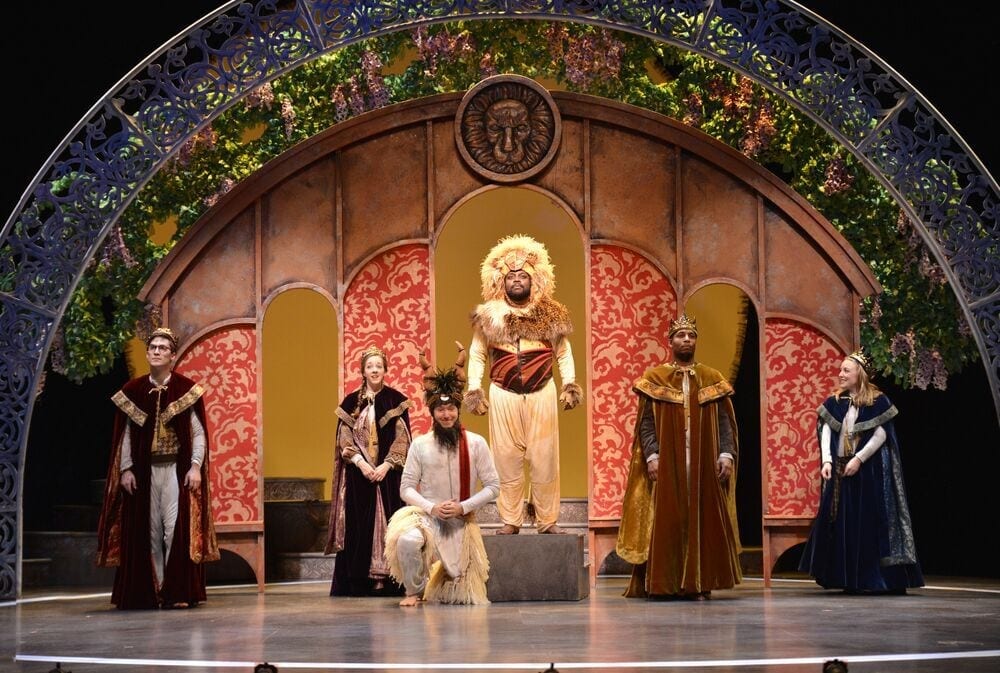 The Lion, the Witch and the Wardrobe smartly leaves much to the audience’s imagination. (Photo by Greg Mooney)

Stagecraft can have a tough time competing with cinematic special effects. A theatrical trick is seldom as convincing, impressive or immersive as the results of digitally manipulating film images. Moreover, filmmakers can try and fail behind the scenes many times until they finally get something right, and it only needs to work once, but a special effect in a play has to function on cue time and again live in front of an audience for performance after performance.

It’s a far greater, even a prohibitive, risk because it’s a risk that has to be taken eight times a week.

But what good plays can create that even the most elaborate films cannot is an unspoken agreement between audience and performers that the illusion actually doesn’t have to be convincing in order to be magical. It’s a delicate thing, and it’s hardly automatic; nothing is more cringeworthy than a play that attempts it and fails.

The Alliance Theatre’s current family production of The Lion, the Witch and the Wardrobe, running through March 20, is a great object lesson in the joyful possibilities of theatrical storytelling.

At first glance, C.S. Lewis’ children’s novel seems an unlikely tale for successful transposition to the stage: It involves travel through a wardrobe, anthropomorphic animals, a giant battle, creatures turned into stone and a host of other things that would seemingly be a headache to convey in the theater.

The script by Le Clanché du Rand originally solved the problem by using just two actors to perform all the roles, combining straightforward storytelling with traditional drama to recreate the story.

The Alliance’s approach mixes that stripped-down, barebones storyteller’s art with a bit of athletic, theatrical dazzle. Director Rosemary Newcott expands the cast to nine. Here, the adventures in Narnia are narrated by the adult Lucy and Peter, the youngest and eldest of the four Pevensie children, charmingly played by Tess Malis Kincaid and Enoch King.

As they tell the story, the action is brought to life on stage through the inventive use of dance, Cirque-like acrobatics, costumes and puppetry, none of it “convincing” in the strictest sense. But one of the play’s pleasures is in watching the acrobatic actors quickly and gracefully climb up on each other’s shoulders to take a new shape or to suggest a huge battle between fantastic creatures through the use of shadow puppets.

It’s a subtle magic, collaborative because the audience participates through a willing suspension of disbelief, that the cinema can’t really evoke.

The play is short and fast, barely an hour long, which is both a weakness and a strength. The play’s speed and brevity mean minimum risk and hassle for adults bringing fidgety youngsters to the theater, but there’s also something lost: the sense of epic (long by definition) and the sense of immersion that should accompany the tale. It’s entertaining, but some older kids may leave with a sense that a beloved, detailed story has been told too quickly.

Still, most children and their parents will be delighted by the athletic and inventive stage magic of the Alliance’s retelling.