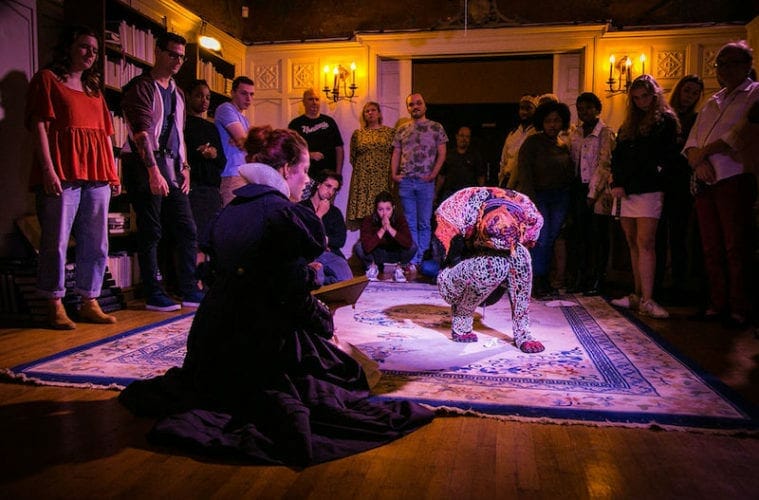 In Found Stages’ Frankenstein’s Funeral, audiences take a one-of-a-kind interactive journey into the mind of novelist Mary Shelley. The company, which has been taking plays out of theaters and into real-world spaces for five years, sets this telling at St. John’s Lutheran Church in Midtown (weekend performances through November 3).

Note that you’ll be following actors throughout the church and, at one point, outside. And there’s little seating.

At a 10 p.m. show, the church’s high, arched ceilings and grand doors become one of the creepiest theater settings imaginable. That’s where Mary Shelley (Jennifer Schottstaedt) meets you to show you Victor Frankenstein’s greatest and most haunting achievement — the creation of The Monster (Joseph Jong Pendergrast). The 75-minute Gothic thriller (directed by Nichole Palmietto) shows us the beginnings of Frankenstein’s experiments and all that follows once he creates a new and horrific life. In this adaptation, Frankenstein (Jake Krakovsky) takes a back seat to our protagonist, The Monster.

The show is most charming and effective when we’re seeing this world from The Monster’s perspective. In an early scene, as The Monster learns to read and dance, Pendergrast displays an incredible childlike joy and physicality that demonstrates The Monster’s innocence at this point in his new life. The actor finds little physical moments that indicate age — like swaying or walking on the tips of his toes. It’s also fascinating to watch The Monster age.

One of the most beautiful moments is “Bride’s Ballet,” in which The Monster marries. Angela Harris’ choreography moves so well on the two dancers — Pendergrast and Dane LeAnna as The Bride — it seems as if it’s happening for the first time. The Monster and The Bride (Joseph Jong Pendergrast, Dane LeAnna) share a brief tender moment during their dream ballet.

By the end of his journey, The Monster speaks in a lower, darker tone, a contrast to the bright tenor he uses earlier. His movements grow stagnant, and his once expressive and curious expression is replaced by a furrowed brow and stoicism. Without Pendergrast and Schottstaedt’s deeply honest performances, Frankenstein’s Funeral could become camp and lose itself in its heightened theatrical elements.

The music (composed and directed by Chris Gravely) also grounds the show and adds dimension to the story. It amplifies every choice the actors make and, in certain moments, creates a subconscious tension that moves the piece forward.

Schottstaedt, who also designed the costumes, gives The Monster a simple and impactful outfit, illustrating the sewn together, amalgamated nature of the creature.