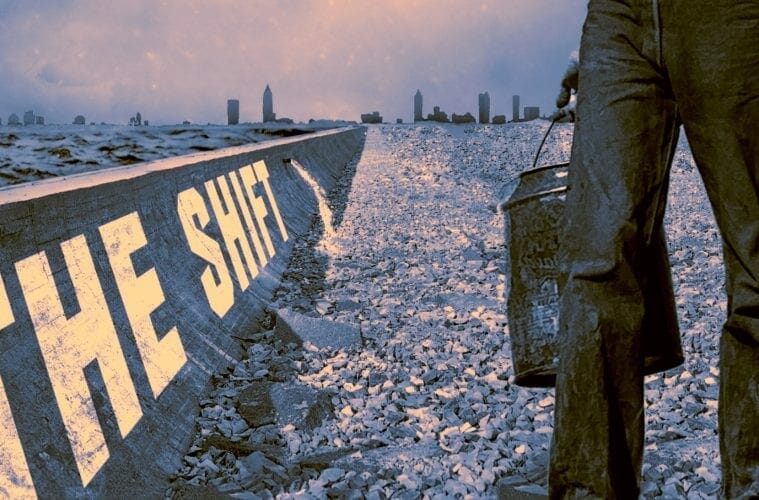 Just in time for World Water Day (March 22) is a new and creative approach to the playgoing-during-COVID experience. The Found Stages production focuses on a space-specific theatrical work titled The Shift, written specifically for Zoom and staged in conjunction with the 2021 Atlanta Science Festival. (It streams through March 27; $20 per household HERE).

The Shift is directed by Nichole Palmietto, Found Stages cofounder, and written by Annie Harrison Elliott, cofounder Neeley Gossett and Addae Moon, with a premise that starts with promise.

We’re in a future world where natural resources have been scarce ever since a nebulous evil group called only “the bottling company” (it may rhyme with “Roca-Rola”) built a dam that cut off the lower and upper parts of society in literal and existential ways.

A resistance faction known as “The Committee” needs the audience’s help to infiltrate the system and redirect the water back to those who need it.

If a future-dystopian scenario about inequity and water scarcity sounds familiar, consider pop-culture touch points like the Mad Max movies, science-fiction novels (Octavia Butler’s eerily prophetic The Parable of the Sower) and Urinetown, the Tony Award-winning 2001 Broadway musical about a town whose water shortages lead to draconian, um, elimination measures.

Flint, Michigan, extreme weather patterns brought on by climate change and last month’s eerie snowfall in Texas only add to The Shift’s timeliness.

This makes The Shift an interesting proposition: fiction reflecting fact back at us when we have very recent, very similar crises to compare and contrast with what’s happening onstage. That’s theater at its best.

In striving to create something especially for Zoom audiences, however, Found Stages trades absorbing storytelling for a less emotionally investing exercise in staving off screen fatigue and distraction.

The Shift begins well enough with an amusing announcement from the control room that our mission will commence in T-minus 55 minutes and that we must “remain fully alert” with cameras and mics on. The designed backgrounds are a nice touch, too — dark, industrial and futuristic — which momentarily make us forget that we’re all in our living rooms.

Next we meet the characters. Wyatt (T.J. Ruth) and Bronson (Jasmine Thomas) are an inseparable brother and sister who enjoy busting one another’s chops. Charly (Alexandra Ficken) is a genius scientist at odds with the rest of the group because she abandoned them at some point in the past. Astrid (Michelle Pokopac), the leader, often provides a voice of reason.

Cleverly written parallels to today include Bronson’s address to the audience, in which she talks of the many who sat idly by while the dam was built. “You watched the protests,” she says, “yet you did nothing.”

At times in The Shift, the audience is divided into Zoom “breakout rooms,” in which each group must solve a puzzle to push the plot — and the water — forward. While sometimes compelling, these exercises don’t always fire the imagination. At one point we were asked to deduce the atomic weight of various elements while looking at the periodic table, ostensibly so we could “crack the code” on some locks. It feels like  forced math. The cast of “The Shift” (clockwise, from top left): T.J. Ruth, Michele Pokopac, Alexandra Ficken and Jasmine Thomas. The names on the Zoom screen refer to the characters they play.

We have to help Bronson navigate tunnels using a map whose red lines represent  deadly laser beams with the commands “step,” “turn” and “jump,” so she can avoid getting singed. When she finally reaches the “exit,” we learn we’re in yet another tunnel with even more guidance required.

“Did we win anything?” one theatergoer quipped, making it clear that this is exponentially more escape room than theater (the program credits interactive puzzle designer R. Andrew Puckett, so the escape-room feel is intentional). We eventually learn that another character was kidnapped, so perhaps viewers in that breakout room experienced a greater sense of danger than we code crackers did.

The Shift may be immersive, but it lacks dramatic momentum, character development and detail. We want more specificity in a story like this because otherwise it’s just a series of brain teasers.

Many of us miss live theater and this experience illustrates, in a bittersweet way, why in-person performances are so potent. Still, it would be less than generous to say that The Shift isn’t novel or engaging or that it isn’t a solid piece of entertainment because, in many ways, it is. Any company that seeks new ways to tell stories in this age of mask and social distancing deserves our appreciation.

As our lives become ever-more enmeshed with technology, we’ll likely need to find more ways to mix invention with art. With The Shift, even for just an hour or so, we can experience something new at a time when sameness is standard. We look forward to a 2.0 iteration.