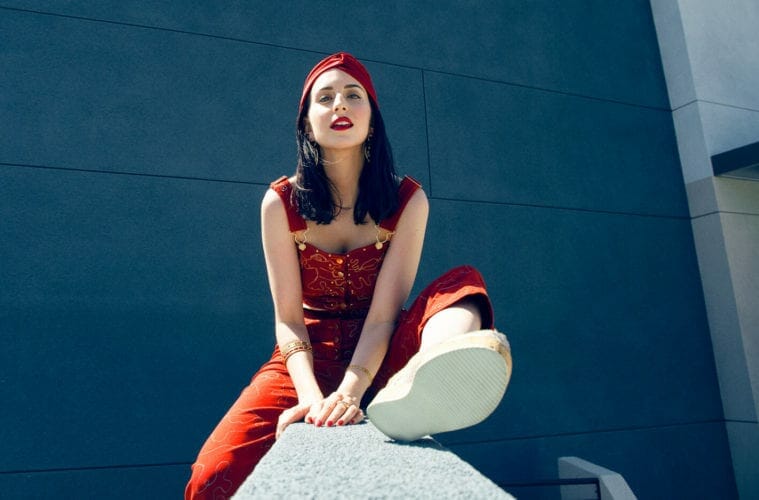 Lilburn-born Nadia Vaeh may make Los Angeles her home now, having move in 2019, but her “Southern soul” pop sound is very much alive. The ATL-based Imperial OPA Circus alum is an old soul who’s weathered some tragedy — her mother died suddenly when she was 17 — and her vocals may remind you of Evanescence, a group that she admired growing up.

Her sound, she says, has been influenced by travel in the Netherland Antilles and Curaçao, plus the Middle Eastern music that ties her to family roots in Lebanon. She has a penchant for donating proceeds from her work to nonprofits like the Human Rights Campaign, the Trevor Project and others.

The video for her latest single features captivating choreography from Vaeh and dancer Mason Tremaine (“Mase Trigga”), set in what at times looks like the studio from Flashdance’s famous audition scene. For another showcase of Mase’s considerable talent, check out this freestyle video.

Dominique Armani Jones, or Lil Baby, shot to stardom in 2017 with the release of his mixtape Perfect Timing. He’s an alumnus of Tri-Cities High School in East Point, also attended by members of the legendary hip-hop duo OutKast (Big Boi and Andre 3000, Class of 1993) as well as longtime SNL performer Kenan Thompson.

Quality Control Records’ CEO Pierre “P” Thomas, who cofounded the label in 2013 with the launch of Migos, has known Lil Baby since he was a teenager and encouraged his music career. This song, released last June, was a huge hit. It tapped into the zeitgeist surrounding protests against police brutality and racism. It rose up the charts and earned Grammy nominations for Best Rap Performance and Best Rap Song. See the original video HERE.

Fatima Robinson directed the buzzed-about Grammy performance, which begins with a James Baldwin voiceover: “When I was brought up, I was taught in American history books that Africa had no history, and that neither had I. I was a savage about whom the least said the better, who had been saved by Europe, and who had been brought to America. Of course, I believed it. I didn’t have much choice.”

Those words play as an intro over a re-enactment of the June killing of Atlanta father-of-four Rayshard Brooks (played by actor Kendrick Sampson). Atlanta police shot and killed Brooks on June 12 in the parking lot of the Wendy’s off University Avenue. “That happened in Atlanta, and I live in Atlanta, and I’ve been in some of those same exact situations,” Lil Baby told Billboard.

Delivering a compelling-as-always performance, clad in a hand-painted outfit covered with 20,000 crystals made to look like a bulletproof vest, Lil Baby generated conversation even during a night filled with attention-grabbing performances. As he told Rolling Stone: “If we don’t continue to keep it in the forefront of people’s minds, then these stories will continue to get swept under the rug.”

The University of Georgia student newspaper The Red and Black once called Phillip Brantley a “man of many bands,” and it’s a name he’s lived up to. He played AthFest 2018, for example, with six bands. As frontman for Palace Doctor and touring bassist for Tedo Stone, Hunter Morris & Blue Blood, Sailors & Ships and Drew Beskin, calling him “prolific” may be an understatement. His drive, perhaps, is partially borne out of wanting to keep up with the competition.

“In Athens, it’s almost a joke how many bands there are and how saturated it is,” Brantley told NPR in 2006 when he was still with Modern Skirts, a band that broke up in 2013 after making music for about a decade.

Brantley’s new EP was written and recorded on his iPhone, and it’s impressive what he was able to do. Listen to the slow, grungy guitar and downbeat, and emotive vocals that are like a cross-pollination of Elliott Smith’s A Basement on the Hill and the Marcy Playground classic “Sex and Candy.”

Unless you’ve live under a rock, you probably know about Oprah’s interview with Meghan Markle and Prince Harry, in which they described a pattern of racist behavior from the royal family, precipitating their choice to leave the U.K. early last year. This Sex Pistols’ song is just about the most anti-royal tune there is, and it comes with a fun bit Atlanta trivia. In January 1978, the Sex Pistols made their U.S. debut in Atlanta, at the Great Southeast Music Hall in what is now Lindbergh Plaza, to a reported crowd of about 500.

They’d intended to debut in Pittsburgh, but last-minute complications forced them to cancel and, lo, Atlanta was next on the list. The tour organizer had evidently tried to set up “antagonistic” sites for them to play by avoiding more typical stops like New York City and Los Angeles.

A relatively limited understanding of the United States comes through loud and clear in our Vintage Track of the Week when frontman Johnny Rotten quips: “Hey, you don’t look like a bunch of farmers” to the metropolitan populace gathered. The Pistols do a lot of “tuning” and don’t get going until 1:30 into this clip, but once they do, they make a surprisingly decent show of it. “That was the new British national anthem,” Rotten quips as they finish.

To no one’s surprise, Sid Vicious landed at Piedmont Hospital after cutting himself with a letter opener at a fan’s apartment following the gig. Also hardly a shocker: The rest of the tour was a tad . . . um, bumpy. The band broke up nine days later. Johnny Rotten, in his elder years, has pretty much become punk’s antithesis, giving acid-reflux-inducing interviews praising Donald Trump and Brexit. In the wise words of movie character Harvey Dent: “You either die a hero, or you live long enough to see yourself become the villain.”