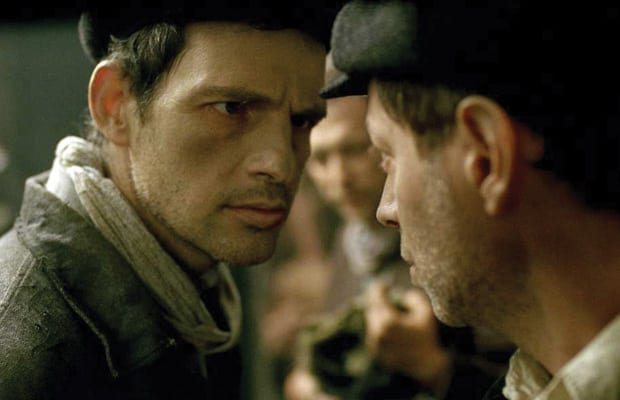 Son of Saul is set inside Auschwitz.

Review: Two foreign films, “Son of Saul” and “A War,” show why they are Oscar-worthy

The motto over the gate of Auschwitz read “Arbeit macht frei,” or “Work Sets You Free.” We now know that the non-literal but truer translation was “Welcome to Hell.” The Hungarian film Son of Saul takes us there in an intimate fashion. It grabs us by the neck, almost literally, steering us into the belly of living nightmare.

In the opening moments, the middle-aged Auschwitz prisoner Saul (Géza Röhrig) swims into view from an out-of-focus background of greenery. (That springtime, in all its tender promise, unfolds obliviously in the woodlands that surround the concentration camp’s horrors feels like a bitter cosmic joke.) We follow Saul into a welter of confusion as men, women and children spill from trains and are marched to a nearby structure with the promise of a nice warm shower, then a meal.

“Hurry up, or the soup will get cold,” these new arrivals are told by camp guards — a lie even crueler than the indifference of nature.

We soon see these people again, naked, gassed to death, dragged along slick concrete floors toward the ovens by Saul and his fellow Sonderkommandos. That’s the name for the inmate workers assigned to dispose of the bodies of other captives. In exchange for the horrific work, these men get a few privileges, like more food than other inmates. They also know they’ll ultimately be liquidated on a schedule run as precisely as everything else at Auschwitz.

Saul and the other Sonderkommandos realize the clock has almost run out for them. So, in between their grueling, macabre duties of dragging bodies and shoveling ashes into the nearby river, they plot to build a bomb and rise up against their captors. (The movie is loosely built around the fact-based Sonderkommando rebellion at Auschwitz-Birkenau in 1944.)

The logistics of this are conveyed to us piecemeal as Saul pursues a goal that’s suddenly more important to him. Identifying a young body as that of his own son, he searches through his barrack and the ones around him for an imprisoned rabbi who can say Kaddish over the boy.

This may sound like a simpler plotline than it is. Director and co-writer László Nemes puts us in you-are-there proximity to Saul and the violent confusions of the concentration camp by keeping the camera tight on him at all times. It’s a technique that most notably is the trademark of the Belgian Dardenne brothers (The Son, Rosetta and Two Days, One Night), who usually concentrate on working-class characters in contemporary times. Using the approach in Son of Saul may not be original, but the historic context pays off beautifully.

As we see the lengths Saul goes to discover a rabbi — often endangering others in the process — the movie shows just how brutal life in camp could be, and not only because of the Nazi captors. Watching it, I was reminded of cartoonist Art Spiegelman’s eye-opening Maus books. If you survived the camps, it was not because of the compassion or cooperation of fellow prisoners. Survival required leverage, usually in the form of money, jewelry or favors. A brutal barter system obtained — if not survival of the fittest, then of the most solvent.

Only an occasional actor (his main pursuit is writing poetry), Röhrig has a craggy, sculpted slab of a head and a brutish demeanor that runs counter to his light, breathy voice. He makes a fascinating subject for the camera. Distinct yet somehow indistinct, his Saul is already a walking ghost. And he’s a perfect everyman for director Nemes’ tour of hell.

But here’s my reservation about this very powerful film: Sometimes, an artist can succeed too well. That’s what occurred to me while watching Son of Saul. In a weird sense, the movie is almost too successful in immersing us in the experience. We leave the theater battered, exhausted accomplices to Saul’s search for redemption. The movie is absolutely riveting yes … but you’ll never want to see it again.

Son of Saul is nominated for this year’s best foreign film Oscar, and so is A War. As if we needed it to, this Danish film, also opening today, reminds us that the so-called Great War of the mid-20th century didn’t exactly bring an end to religious intolerance and unending armed violence across the globe.

Pilou Asbæk plays Claus, a Danish army company commander, stationed in Afghanistan, whose soldiers patrol the rocky landscape during the day and try not to get blown up by IEDs planted by the Taliban. His guys’ nerves are shredded by the routine, especially after a mine takes out one of their comrades at the movie’s start.

Meanwhile, Claus’s wife, Maria (Tuva Novotny), is back home in Denmark, trying to raise their three kids all by herself. In its first half, the movie does an artful job of showing us that being on military duty abroad is not so much harder than being a single parent. Especially when the middle kid, Julius, is misbehaving at school because he misses his dad, and the younger son has a habit of putting toxic things in his mouth. (Actress Novotny has a really lovely screen rapport with the three kids.) 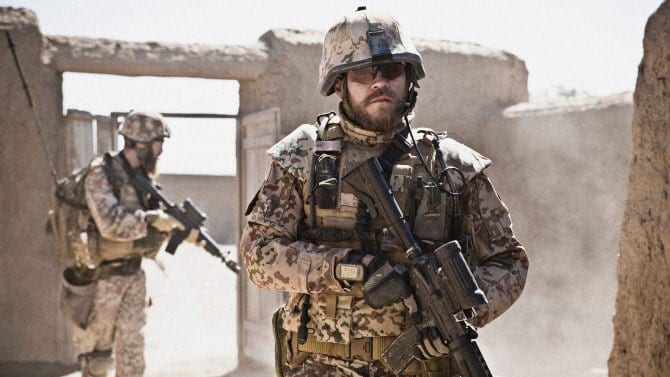 The two halves of the movie come together when a desperate firefight in Afghanistan leads to Claus’ return home — and to a tribunal investigating his actions, which may have led to the deaths of civilians. Because Claus was trying to save his men’s lives, and medevac a wounded soldier out of harm’s way, he did not follow exact military protocol. Which leads to a quandary: Should he take the blame and leave Maria to continue raising the kids alone while he serves his sentence, or should he fudge the facts, just a little?

Writer-director Tobias Lindholm approaches these military hearing scenes with a nice, deadpan precision. There are no big courtroom emotions here. His 2012 Somali-pirate film A Hijacking avoided the high dramatics and action scenes of the similarly themed, Tom Hanks-starring Captain Phillips, and was the better film for it. But his cool resolve results here in a movie that is more admirable than gripping.

A War reminded me of another Danish film, 2010’s In a Better World, which won that year’s foreign film Oscar, and shouldn’t have. Like the newer movie, it zigzagged between two continents and found possibly too-easy parallels between global and domestic conflict. I like A War better. It’s less emotionally manipulative. But it, too, wants to show us a messy moral dilemma, but, paradoxically, does so a little too politely and tidily.

Still, there’s a reason both A War and Son of Saul are up for Oscars. You should see them.

Son of Saul. With Géza Röhrig. Directed by László Nemes. In eight languages, with English subtitles. Rated R. 107 minutes. At the Tara and Lefont Sandy Springs.