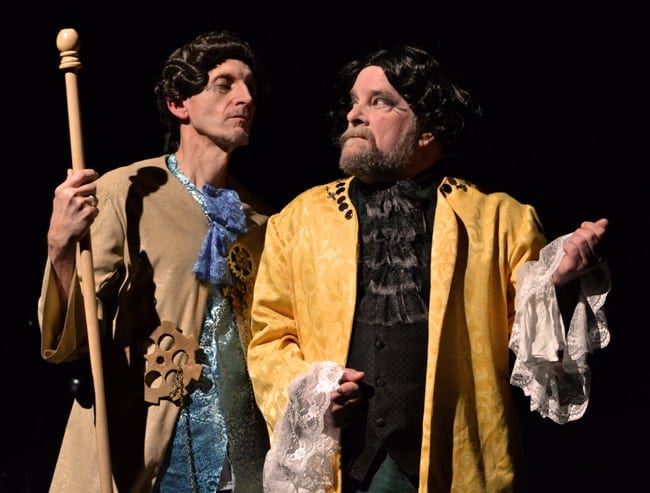 The new Atlanta theater company Fabrefaction, now in its second season, has shown that it’s not afraid to take on the classics in a city that sees far too few productions of them. Last season ended with a stellar and captivating production of Chekhov’s “The Seagull,” and 2011-12 has built on that momentum, especially with the company’s take on Molière’s “Tartuffe,” on stage through March 25.

Designer Jeffery Martin’s in-the-round set for the theater’s black-box space uses a few simple benches, painted tiles and bright ribbony flourishes to lightly suggest the French Baroque period. But primarily he leaves plenty of space for an arena-like setting in which the action can unfold.

And unfold it does. Director Christina Hoff makes speed and movement the order of the day. The actors use every parcel of the space, with all its possible entrances, exits, angles and arrangements. Costume designer Chelsea Knost apparently spent some giddy late nights in the shop building the fanciful, colorful and elaborate flounces and frills of 17th-century French dress, which perfectly suit the preening vanity and foolishness of the characters.

False piety is Molière’s primary target, but a whole range of human folly is brought on stage in its wake, and he spares no one. The selected translation of the play, by Richard Wilbur, is smart but accessible. It keeps the rhyming couplets of the original French, but it rarely seems strained, clumsy or artificial, which is quite an accomplishment. Words, and how they can be used to misdirect and deceive, are at the heart of the story, and the lines come fast and furious. But the cast handles it all — and  in rhyming couplets, no less — with great facility, clarity and humor.

Kelly Criss as the maid Dorine is a standout in a strong cast. She conveys a sense of the character’s mounting comic frustration at having her good judgment go unheeded. Heather Rule brings a bit of hilarious “Legally Blonde” poutiness and whimpering to the role of Marianne, which is matched by Chase Steven Anderson as her vain and silly suitor Valere. Diane Mitchell’s Elmire has a no-nonsense impatience to expose her husband to Tartuffe’s hypocrisy. It all coalesces into a perfect storm when John Stanier’s sublimely clueless Orgon hides under a table and witnesses the undeniable truth.

Whit Davies has a sort of crafty self-regard in the lead role of Tartuffe. He’s a monster, but an understandable monster with simple and selfish drives that he expertly covers with smooth speeches, flattery and false piety. Like the best con men, he knows himself and can use that knowledge to know other people: their vanity, weaknesses and vulnerabilities.

This production of “Tartuffe,” with its combination of Baroque folly and farcical, Mel Brooks-like antics, won’t be everyone’s cup of tea. It took me a few scenes to slide into its aesthetic, but by the end of the first act I was captivated. The second act, with all its machinations for ensnaring Tartuffe, clicked into place as tidily and satisfactorily as the second line of a rhyming couplet.

Fabrefaction has established itself in Atlanta theater as the smart new kid on the block, well worth watching in seasons to come.