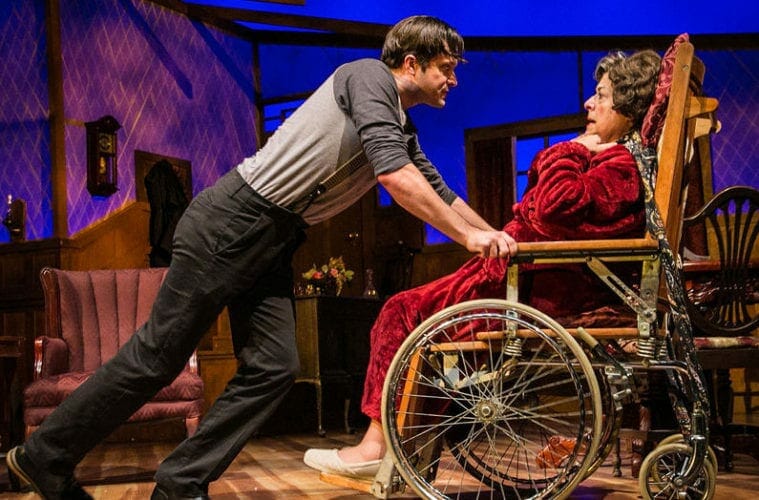 Jonathan Horne, as a mysterious, charismatic stranger, and Susan Shalhoub Larkin as an unpredictable, ill-tempered employer, face off in Georgia Ensemble Theatre's thriller "Night Must Fall." (Photo by Casey Gardner)

A vulnerable elderly woman. A stranger with a past. A secret hat box glued shut to keep prying hands out. These are some of the tropes that pop up in the Georgia Ensemble Theatre thriller Night Must Fall (through November 10 at the Roswell Cultural Arts Center).

The material — timed for Halloween season — proves to be a mixed affair, but there’s no denying that director Shannon Eubanks, a frequent presence at the Roswell company, has attracted some of the city’s brightest talent.

In her bungalow near New Canaan, Connecticut, Mrs. Bramson (Susan Shalhoub Larkin) is an ill-tempered, wheelchair-bound boss, threatening almost from the start to fire maid Dora Parkoe. Dora (Rebecca Botter), we soon learn, is pregnant; the father is a hotel bellhop named Dan (Jonathan Horne), a mysterious, albeit charismatic type, who meets Mrs. Bransom, charms her and lands a job as an assistant. Mrs. Bramson’s niece and companion, Olivia (Christina Leidel), is leery of Dan. And, just as household members get accustomed to their new order, Inspector Belsize (Joe Sykes) interrupts to inquire about a local woman who’s gone missing. When a human hand is found in the woods, eyes turn toward Dan. Joanna Daniel as the house cook, Eliana Marianes as a nurse and Doyle Reynolds as an admirer of Olivia’s complete the eight-person cast. 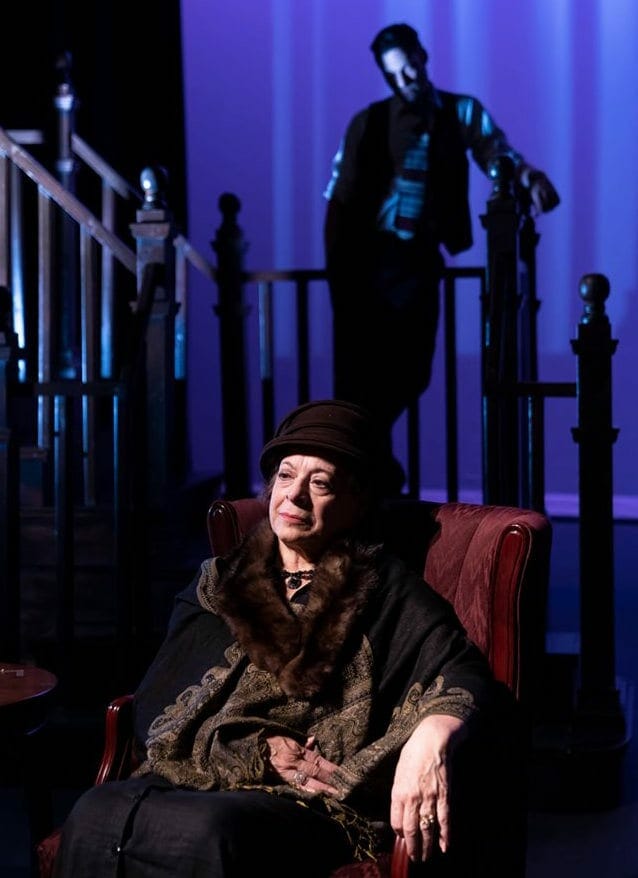 Night Must Fall isn’t really a whodunit or much of a mystery. It’s billed as a psychological thriller, with Dan handily seducing those around him. The thriller, written by Welsh dramatist Emlyn Williams (1905–87), was first staged in 1935 and has been adapted to film three times. Matthew Broderick played Dan in a short-lived 1999 Broadway revival, but the play isn’t done much.

GET moves the setting from London to America. Act I, although relatively short, is tepid and talky. Way too talky. It takes too long for anything to happen and is loaded with extraneous characters. The second hour is much tighter and more satisfying. The playwright, who once played Dan, manufactures a few genuinely surprising moments, and the relationships that Dan cultivates are complex.

Thankfully, the thriller gives Eubanks more to work with than Essential Theatre’s summertime Babyshower for the Antichrist. She doesn’t entirely succeed with the play’s early long passages or some tonal shift changes, but she does wring sincere scares here and there, and her ending scene is ghoulish and dark. 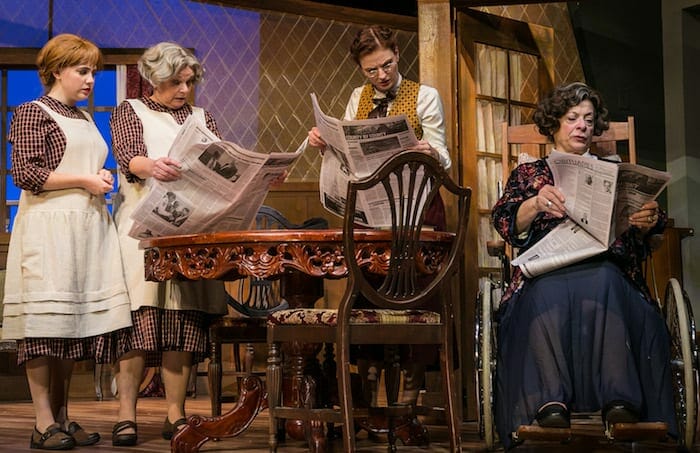 Her actors obviously savor the challenge. Daniel has some funny moments as the cook, and Sykes — who’s become a fine character actor — has a tense scene with Horne’s Dan in Act II. Larkin, always a welcome presence, hasn’t been on the Georgia Ensemble stage since the 1993–94 season, when she appeared in the company’s first show, You Can’t Take It With You. Her Mrs. Bramson begins as one-note brittle, with Larkin unafraid to show the character’s ugly side. She’s a manipulator and not quite what she seems, yet Larkin also manages to show us a woman who softens somewhat and genuinely takes a liking to Dan.

This is Horne’s play, though, and he’s terrific as the duplicitous Dan. Horne walks a fine line in shading his character. One moment he’s a bit unhinged, the next he’s wounded and in need of comfort. It’s all totally believable.

After Georgia Ensemble’s recent, well-received Cat on a Hot Tin Roof, this thriller feels like filler. It’s certainly a rung or two below what the company can deliver, but with these actors and Eubanks at the helm, Night Must Fall lands more smoothly than it should.