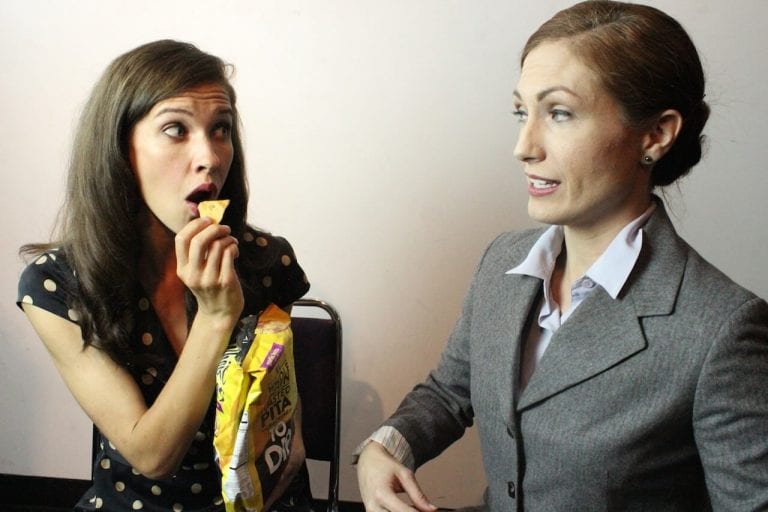 Fraught mother-daughter relationships have long been fodder for dramatists, but the mothers and daughters that populate the new play Another Mother, on stage at Essential Theatre through August 26, give “fraught relationships” a whole new meaning.

Shortly after her mother’s funeral, 18-year-old Genevieve (Rylee Bunton) consents to genetic testing by her cousin, who is researching the health history and genetic makeup of the women in her family. What she discovers shocks them both: Genevieve seems to share absolutely no genetic material with her deceased mother. Further sleuthing reveals that Genevieve wasn’t just adopted, her birth was more or less engineered by the eccentric science professor who raised her as her own.

Unable to have children herself, Rosalind (played in flashbacks by Nina Jones) convinced her young research assistant Leah (Kelly Quinn) to donate eggs for the process and her fundamentalist sister Barbara (Sarah Falkenburng Wallace) to carry out the pregnancy and bear the child, keeping the whole thing a secret from Genevieve as she grew up. Now, as Genevieve mourns the loss of the mother who raised her, she also seeks out connections with the two strangers who are both in some ways also her mothers, though neither of them are particularly overjoyed to have her suddenly pop up in their lives again.

Atlanta author G.M. Lupo’s play, the winner of the 2017 Essential Theatre Playwriting Award, is a little slow to start, primarily because the relationships the play depicts are so complicated; it takes some time simply to lay out the groundwork. And once Genevieve pieces together the story of her origin, not enough seems at stake. The central characters, once they meet, are more or less strangers to each other: there’s not a long history of emotional involvement that could give the dramatic action more depth.

As an especially bright 18-year-old, Genevieve seems independent and adult enough to survive without a mother, to accept her unusual origins and to move on, regardless of how her other mothers react to her reappearance in their lives. She isn’t life-or-death emotionally invested, and the relationship between Genevieve, Leah and Barbara unexpectedly devolves into a fight over some still-frozen ovaries, with an Act II “science vs. religion” debate outside a courtroom that seems miles away from the heart of the story. Moreover, old, off-stage eggs are not the stuff of pulse-pounding onstage drama, and after the extensive detective work of Act I, we linger too long on the moral, philosophical and ethical implications involved with the eggs in Act II, rather than digging into the development of interesting relationships between the characters on stage.

Still, Lupo’s narrative has an appealingly jaunty, unpredictable arc to it,  which is no small accomplishment in a world where most plays typically have viewers thinking “I know where this is going” five minutes in. I wasn’t satisfied with each and every plot turn, but Lupo’s writing does keep you guessing and interested. The strong cast, primarily made up of women (Trey York plays a few minor male roles including a lawyer and a funeral director), is noticeably well-placed in their various roles by director Peter Hardy, helping to bring unusual characters in singular situations to vivid, convincing life: Bunton as a curious and driven Genevieve; Quinn as the spiky and practical-minded CEO Leah; Jones as the charmingly eccentric intellectual Rosalind; Christine Vozniak as the winningly dippy sister Alyssa are all memorable.

Though the journey isn’t entirely smooth, we certainly end in a place that feels right, with Genevieve reconnecting with her mother(s) and accepting them for their faults, obfuscations and shortcomings. Her story may be strange, but her struggle to maintain a stable mother figure, in whatever form the figure might take, feels fittingly universal.