“What good is sitting alone in your room?” asks a character in the title number of the 1966 Broadway musical Cabaret. Well, the short answer is: there isn’t any good in that at all, certainly not when said musical is getting a fantastic, late-summer production from Serenbe Playhouse (through September 3). Best to do exactly as the song advises: Come hear the music play.

A touring version of that show with a different cast failed to evoke the spirit of the revival when it stopped at the Fox Theatre some years ago, but the Serenbe production, clearly under the influence, successfully brings alive its sense of intimacy and its sleek, dark aesthetic. The troupe creates an immersive setting out of the show’s fictional Kit Kat Club, here reimagined as a sort of outdoor courtyard with a central catwalk lit by dazzling strips of colored lights. 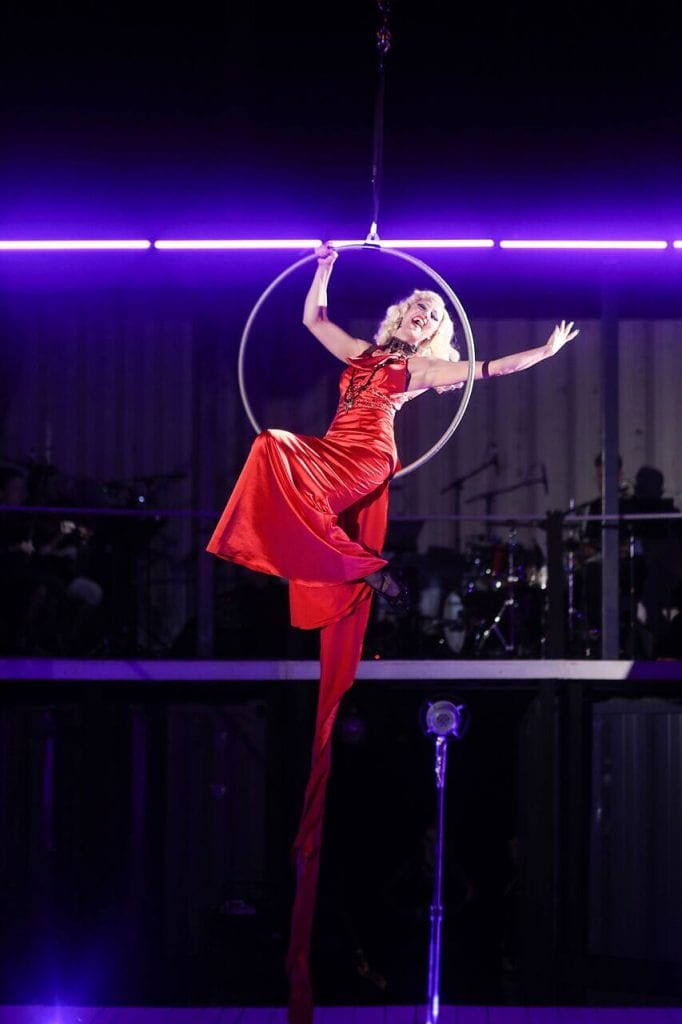 Last year’s elaborate Serenbe production of Miss Saigon had audiences wondering how the company could top that show in subsequent seasons. Artistic director Brian Clowdus here takes the daring leap of casting himself in the lead role of the Emcee, and, happily, he proves to have far more star power than any helicopter ever could.

He shines in a role he seems born to play, teasing the audience with bawdy jokes and over-the-top musical numbers, creating an emcee who is by turns seductive, impish, nightmarish, cruel and playful. Songs like “If You Could See Her,” “Money” and the signature “Willkommen” (with its star entrance) exceed expectations. Even better, “I Don’t Care Much,” a song I’ve never seen performed memorably (literally I don’t remember it from any version of the show I’ve seen), here has a remarkably plaintive, late-evening sadness that hovers over the sobering action of the musical’s second act.

The bulk of the show and its musical numbers belong to the Emcee and to the lead character Sally Bowles, here given effervescent life and touching, more serious undertones by actress Molly Tynes. She sounds especially fine in rousing, sexy songs like “Mein Herr,” but she also excels on the more introspective and inventively staged version of “Maybe This Time.”

In the Serenbe production, strong performances also make many of the supporting roles pop to life. Heidi Cline McKerley as landlady Fraulein Schneider and Robert Wayne as her late-life love interest make their slowly blossoming romantic relationship — which I recalled from other productions as seeming dippy and sentimental — truly touching, and McKerley masterfully handles a couple of strong numbers for Fraulein Schneider that were struck from the film: the cynical “So What” and the second act’s desperate “What Would You Do?” 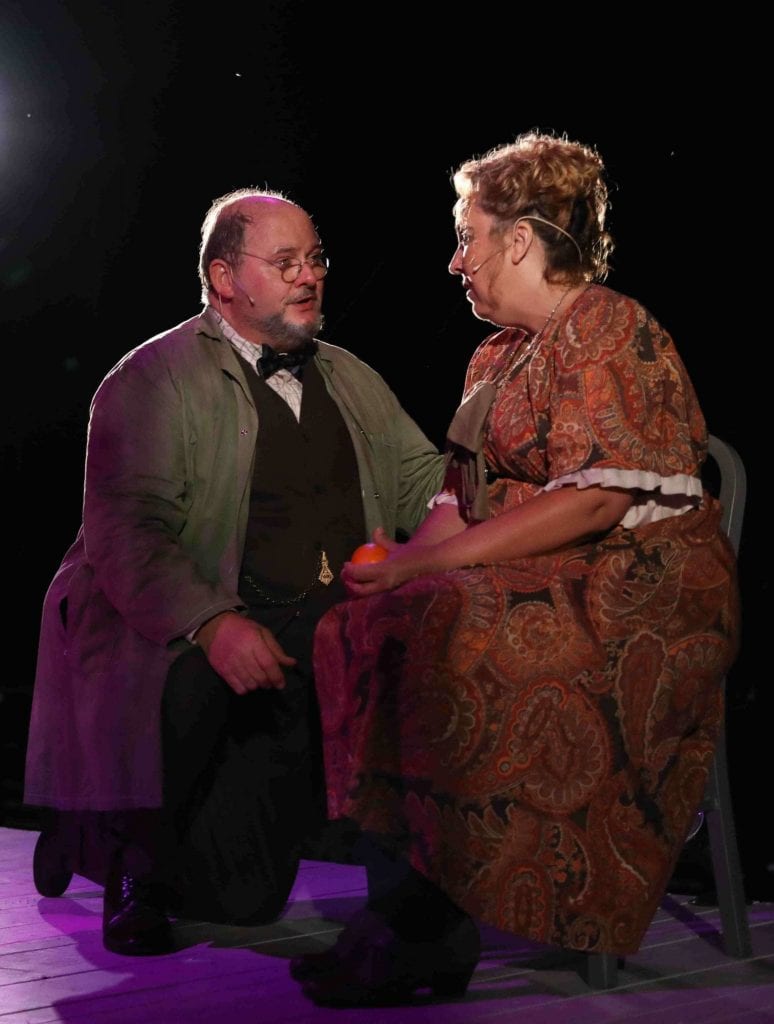 Lee Osorio as the central dramatic character, the American writer Cliff Bradshaw, is believably determined and romantic, and Deborah Bowman shines in the small comic role of a loose neighbor, a part I’d barely noticed in previous productions. Bowman also sings a fantastic, evocatively nostalgic version of the lovely tune “Married” (in German no less), and she likewise sounds great on the anthemic “Tomorrow Belongs to Me,” not typically the easiest number to sell on stage.

Though the atmosphere is one of louche, naughty fun, the overarching message of the show struck me as surprisingly dour and anxious, even conservative, this time around. The idea that social fluidity and sexual permissiveness go hand-in-hand with political apathy, moral obliquity and social decay was, after all, the fascist critique of modernity, and it’s odd to see parallel notions emerge, albeit in very different clothes, in the stage show.

The setting is 1930s Berlin, of course, in which a liberal, progressive urban culture was indeed wiped away by the rise of the Nazis. But the show’s particular anxiety about sexual and social enjoyment being the sand in which one’s head is ineluctably buried seems somehow more of its own time period than the setting’s. Isherwood — who plainly stated that as a young man he’d followed his friend and colleague W.H. Auden to Berlin in order to meet boys — is unrecognizable in the show’s lantern-jawed, crypto-hetero American innocent Cliff Bradshaw, and Isherwood himself once remarked how his account of that time and place seemed to shift and recede with each subsequent retelling of his story by others. His work first became the basis of the play I am a Camera, then a movie of the same name, then a Broadway musical based on the play until finally it became a movie musical. In later writing, he described his sense of alienation upon watching the on-screen antics of a manic American woman with the face of Judy Garland perform as Sally Bowles.

Still, the musical is uniquely itself, and it remains, in spite of any objections, including the author’s, a functioning thing. The Kander and Ebb songs — there are a lot of them in the show, many more than in the film — retain that lost art of being catchy and melodic without being noisome; lovely and emotional without being mawkish or overly sentimental; and old-school without seeming self-consciously encased in glass.

The two collaborators managed to navigate those delicate lines, and the songs are placed in such a way that they complicate the action and emotions on stage rather than reducing them into force-feedable chunks. Moreover, the show’s story of a society that takes a sudden, sharp turn toward nativism seems discomfitingly timely. I predict that it will be a long time indeed before Cabaret will have a better or more resonant expression than it does right here and right now at Serenbe.