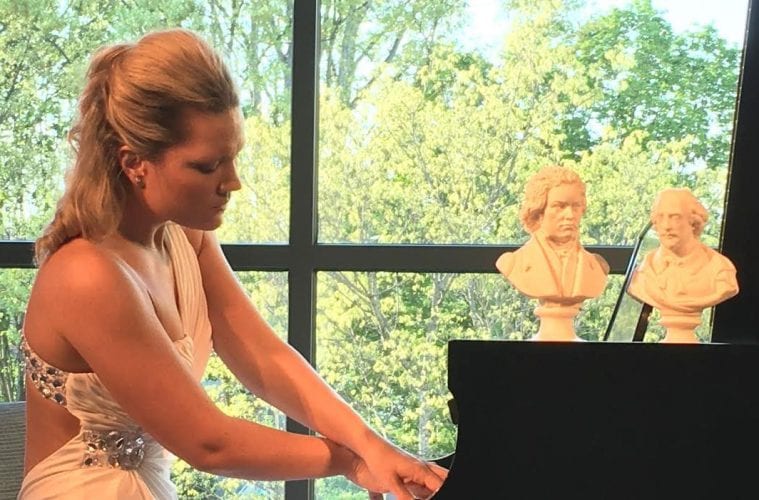 On Tuesday evening in Ackerman Hall on the top floor of the William C. Carlos Museum, the Emory Chamber Music Society of Atlanta presented a program entitled “Shakespeare and Beethoven.” The one-hour recital included two compositions by Ludwig van Beethoven and featured performances by pianist Julie Coucheron and the Vega String Quartet, interspersed with readings from William Shakespeare’s plays and sonnets by composer-conductor Richard Prior.

Coucheron performed Beethoven’s Piano Sonata No. 17 in D minor, Op. 31, No. 2 — familiarly known as “The Tempest” (“De Sturm” in German) but never given that name by Beethoven himself. Nor was it called that during his lifetime. The apocryphal title comes from one of the composer’s associates, Anton Schindler, a competent violinist who lived in Beethoven’s home beginning in 1822 and served as Beethoven’s unpaid secretary and later biographer. Schindler claimed that the sonata was inspired by Shakespeare’s play — an assertion not trusted by classical music scholars. Nevertheless, such appended titles were often created in the early 19th century, and many remain to this day.

Coucheron played the sonata beautifully, although the piano itself didn’t seem quite as much up to the task as the pianist. Prior read selections from Shakespeare before each movement: two excerpts from The Tempest and Sonnet 128, each referencing music.

For the second half of the program, the Vega Quartet (violinists Elizabeth Fayette and Shuan Wu, violist Yonzi Kong and cellist Guang Wing) performed Beethoven’s String Quartet No. 1 in F major, Op. 18, No. 1. It is sometimes called the “Romeo and Juliet Quartet” thanks to another piece of apocrypha, the claim of Beethoven’s friend, Karl Amenda, that the second movement was inspired by the tomb scene of Shakespeare’s play. Again, it’s a lone source of debatable value, and no such reference to the play appears in the earliest published scores themselves.

The Vegas played the quartet convincingly, with good color and energy. Prior, as before, read from The Bard before each movement, again with reference to music: from The Merchant of Venice, Romeo and Juliet, Twelfth Night
and Sonnet 8.

It may have been much more apropos to have presented a concert of madrigals and part-songs by Shakespeare’s contemporaries, ones that might have been performed within those plays such as John Dowland’s “Come again, sweet love doth now invite.” But in spite of the far-stretched connection of mere titular allusions, it’s not a bad amalgamation to present side by side works by two pinnacles of their respective genres, although the peaks of their careers were nearly 200 years apart. Both Shakespeare and Beethoven understood well the power of music and poetry, and that arts can speak across the centuries to find common human ground in their expression.