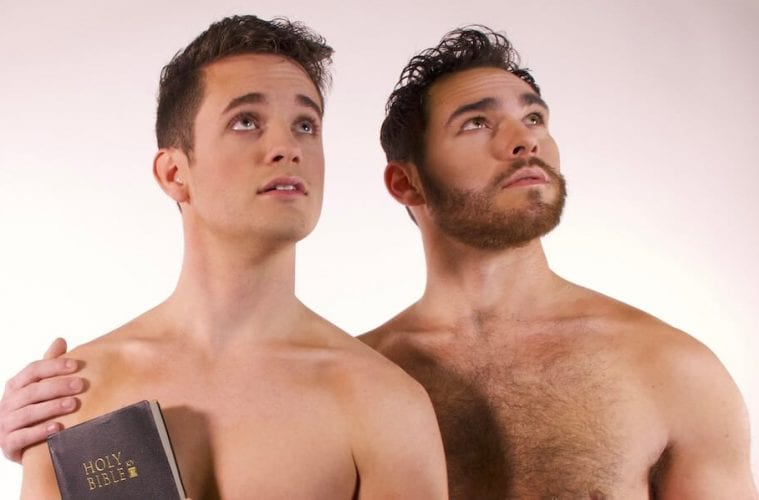 News: Out Front Theatre faces protests from religious group over “Most Fabulous Story”

As Paul Conroy was piecing together programming for the inaugural season of his Out Front Theatre Company — the company he founded and that is dedicated to telling stories of the LGBT experience — the addition of The Most Fabulous Story Ever Told, opening April 27, seemed like a no-brainer for his lineup. Written by Paul Rudnick, it’s a celebrated comedy retelling of much of the Old Testament, with Adam and Steve in the Garden of Eden, eventually joined by two lesbian characters, Jane and Mabel.

When he checked his email messages early on the morning on March 27, however, Conroy found an email protesting the show. As it turns out, it was the first response as part of a form email/petition called for by the Pennsylvania-based America Needs Fatima, a campaign to “capture the heart and soul of America with the Message of Our Lady of Fatima.” The organization’s online petition — which says “this blasphemous play is a vile insult to the Mother of God!” — has been signed by more than 40,000 individuals, with a goal of 45,000. The proposed protest letter, addressed to Conroy, states that, “If you continue with this presentation, we will urge Catholics to oppose it loudly, peacefully, and legally in as large a protest as we can help make possible.”

A week and a half later, Conroy and the company had been on the receiving end of close to 12,000 email messages, Facebook messages, phone calls and letters. Most have been part of the America Needs Fatima protest, but others — from around the world — have popped up as well, one even to Conroy’s personal email address.

While none of the messages have been violent or threatening, they have been disturbing. “They have said we were godless, are going to hell, are disgusting,” says Conroy. “There have been some comments about my family and the way I was raised. Others have said we are doing this just for the money. It’s amazing that anyone would think we are producing a show at a non-profit for the money.”

What frustrates Conroy is the sense that many of those protesting might not even be knowledgeable of the work. “I would love to ask if they have seen or read the show and then I would invite them to talk about why they feel that way,” he says. “I would rather have a conversation than picking one side or the other.”

Nonetheless, he has made the determination not to directly engage with any of the protesters. He is aware that he is not going to change their minds. “The most we can hope for is to educate people who don’t know about us,” Conroy says. “We’d like them to have an open mind, to look at our mission and understand that the theater is a conversation starter than can bring people together.”

Conroy, Out Front’s artistic director, actually produced a version of the show at Encore Theatre Company in Boston before moving to Atlanta, and the play ruffled no feathers. “That was in 2007 and the Internet wasn’t nearly as prevalent as it is today,” he says.

The 1998 comedy was staged by Atlanta’s Essential Theatre in 2004 — the last production in Georgia — to no public outcry at all, says Essential Theatre’s artistic director Peter Hardy. When students at Pioneer Valley Performing Arts Charter Public School, in South Hadley, Massachusetts, performed the show in 2013, however, there were religious protests.

Some of the current protesters have indicated they would come to the theater and picket. Conroy has contacted the LGBT liaison of the Atlanta Police Department, who has said they will alert the Department of Homeland Security to keep an eye on the group. A uniformed officer will be present at opening night.

The constant barrage of messages has slowed down day-to-day business. Conroy, who is directing the production, has asked cast and crew not to email him in fear the messages would get lost in the daily onslaught. He and Jacob Demlow, the assistant artistic director and director of education, have stopped answering the company phone as well. “Many of the cast have not experienced this kind of hate before,” Conroy says. “Not that I have either directly but I have heard of it. This group is doing what they can to make sure the show doesn’t go on.”

Conroy’s company started last fall in the former home of Fabrefaction Theatre Company in west Midtown with a run of Priscilla, Queen of the Desert: The Musical and continued with the recent A Kid Like Jake. The 2017–18 season will include, among others, The Rocky Horror Show.

Despite the opposition, there has never been any talk of canceling the production or altering any future programming. “No one from the show has come to me and said we should not do it,” says Conroy. “They are true professionals and to me that is wonderful. I would never back down. This won’t stop us.”