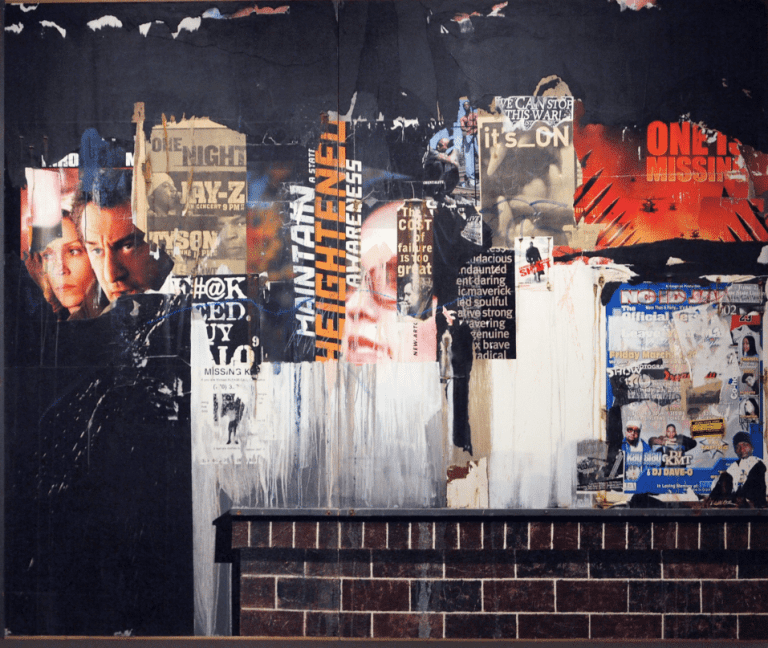 In Larry Walker’s Male Torso (1961), the lines rendering the subject become almost indistinguishable at certain points. While Walker’s lines are elsewhere clear, his marks and shading give the intriguing impression of a fading body, or a fading subjectivity, or one in transition. Male Torso is the earliest work in the new exhibition Larry Walker Retrospective: The Early Years, and the pieces throughout the show make clear that the artist continued to grapple with issues of the body, its subjectivity and its relation to the body politic throughout his early work in one way or another.

Although Atlanta-based visual artist and educator Larry Walker has sustained a prominent career for over half a century, there has until now been no major scholarly study of his work. The Museum of Contemporary Art Georgia (MOCA GA) has changed that with the opening of the first segment of a two-part exhibition that will run over the course of 20 weeks and the publication of an accompanying new scholarly text. Larry Walker Retrospective: The Early Years is currently on view at the museum through July 31. The Later Years will run August 11–October 27.

The first exhibition is a beautifully curated experience of Walker’s work from 1961 to 2005. While that may seem like a large amount of time for “early work,” the pattern of Walker’s career suggests these dates are fitting. For the most part, the works from the 1960s to the 1990s are paintings and drawings like Male Torso. Those from the 1990s to the 2010s are varying sizes of collages that further interrogate the issues that the artist begins examining in his drawings.

Born in Franklin, Georgia, in 1935, Walker and his family were among the thousands of black Southerners who migrated north in the interwar period during the Great Migration. Walker spent his formative years in New York City before relocating to Detroit, where he studied at Wayne State University. Perhaps because of these experiences in so many different geographical and cultural locales within the US, Walker’s oeuvre contains clear elements and influences from both rural and urban environments, and he remained continually committed to questioning the individual body’s placement within the body politic of the nation.

The body itself often appears as a shadow in Walker’s work. A shadow emphasizes how the body — its silhouette and features rather than the physical object — can be represented, read and acted upon. A shadow can likewise accentuate how the body exists beyond its physicality, how it exists within a social landscape, just as it does within the imaginary.

In Cross Cultural Dialogue II: Victim Wall (2003), in the bottom right corner of a large collage, there appears a shadow of a man carrying a lunch pail or sack. The acrylic and mixed-media collage combines words, images and materials — a line of bricks, printed matter from a Brazilian edition of Playboy, street signs, text such as “See for yourself” and “urgent education of our kids,” notices about a reward for a lost dog and pictures of pop stars, chefs, people fleeing a disaster and children of color — to expound on the way in which even the body is influenced by and belongs to a larger body of people, ideas, messages and politics. (It’s interesting to note that shadows and silhouettes also often appear in the work of Walker’s daughter, Kara Walker.)

At the spine of Elegized Wall (1994) is an image of two dark hands holding tightly to a staff. Two of the largest images repeat: A young black person looks out at the viewer, one eye covered by a fist resting on the bridge of the nose. Below these, we see Louis Farrakhan and Elijah Muhammad; their images are the clearest among the obfuscated depictions that suggest outlined bodies dancing, standing still or somehow evaporating into the larger body of the collage. Like the elegy in the title, the piece is subtle, yet stately.

While they may seem like a departure from his earlier works, the collages pair nicely with Walker’s drawings, which are earlier iterations of the same cross-cultural dialogues. In a desertlike landscape of red, black and hints of green, the drawing Tribute to the Ancestors (1987) instantly invokes red Georgia clay and the South’s infamous humidity. Two figures standing in the foreground take on the color scheme of the landscape. One’s head stretches up while the other, headless, seems almost to embrace the other. A closer glance at the dark formation covering the subjects’ front reveals a shadowed silhouette of a face, possibly invoking the shadow figure of the colonizer. Tribute to the Ancestors can be taken as a meditation on the pain of slavery or the forced removal of indigenous peoples from their land in the Americas.

The care and precision that MOCA GA has put into this show is evident. Included in the exhibition are archival materials from Walker’s time teaching at the University of the Pacific on the West Coast and his professorship at Georgia State University. These letters, interviews and news clippings give an in-depth perspective of not only Larry Walker the artist, but Larry Walker the father, husband, mentor and colleague. In his work as a teacher and as an artist, Walker aims to lift as he climbs, always inspiring, always creating work that invokes through unexpected avenues the humanity that connects us all.