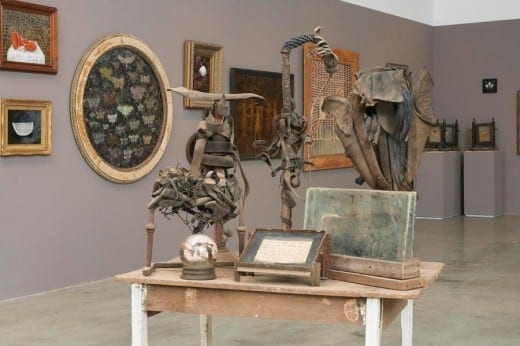 Review: EK Huckaby — poet, saint of the obsolete, savior of the discarded — at MOCA GA

EK Huckaby, one of this year’s MOCA GA Working Artist Project award winners, has transformed the glacial gallery space into a dim and dusty small-town natural history museum where nothing is as it seems.

Anhydjinnic Molassicism, on view at MOCA GA through November 29, is a salon-style presentation of 61 recent mixed-media works — assemblage, installation and painting — a body of work that looks at first glance just like it sounds: lots of old, often unclean, not quite identifiable things under coats of time and the viscous, treacly layerings that we’ve come to expect from this Georgia artist.

Vestigial Speciation (2014), a menagerie of curiosities atop an old wooden table, occupies the center of the formerly cavernous gallery. An odd sense of urgency emanates from the assemblages made from the dusty leather of deconstructed old saddles or riding paraphernalia. They seem animated, in possession of a story that wants to be told but that stays just out of reach.

During his artist talk, Huckaby described the work as nondemanding, tactile and visceral. One in particular, a crystal ball–shaped vitrine filled with viscous liquid and something oddly animallike floating inside, elicited a distinctly visceral reaction, an almost-revulsion that perfectly conjured the thing you can’t quite look at from James Dickey’s poem “The Sheep-Child.”

I have heard tell

That in a museum in Atlanta

Way back in a corner somewhere

There’s this thing that’s only half

Pickled in alcohol      because

Huckaby does what poets do. He takes disparate things and puts them together in ways that make something entirely new, often beautiful, sometimes humorous and always curious.

His tabletop tableau, with its grotesque crystal ball, sets the tone for Anhydjinnic Molassicism and offers clues on how to look at Huckaby’s collected work. You can’t always believe what you see, as he warns in his artist’s statement: “All appearances are to be interrogated and not allowed to exert undue influence.”

The first part of his directive is easy to follow; it’s almost impossible to look and not ask questions, not wonder. But Huckaby’s work does exert influence. It gets under your skin and demands to be reckoned with.

Huckaby is a maker of words as well as paintings. The title of his show employs two of his own neologisms: Anhydjinnic, meaning “unclean spirits,” and Molassicism, meaning “slow, sweet study.”

A secret piece made from yellowed, crocheted doilies hangs high above the table. Don’t miss it. According to Huckaby, it works with its companion on the wall below, Scrygry (2014), made of corkscrew wires embedded in what looks like beeswax, to pull the bad spirits from the room and capture them. If there is a unifying theme in this show of richly lacquered paintings and cast-off constructs, it is the accumulation of memory and the attrition of time.

Huckaby is a storyteller with a flair for the Southern Gothic. He employs absence to elicit a profound sense of simultaneous loss and presence. In Procession, in oil on panel, a congeries of abandoned shoes crowds the floor beneath an empty, neatly made bed in an otherwise empty room. Whose shoes are they? Where did the wearers go? Are they coming back?

Another oil on panel, Neglected Reputation, is filled with silver trophies, once meaningful, now tarnished, illegible and forgotten.

Attrition (2014) captures moths behind a scrim of mica flakes and evokes the butterfly-wing collages of Jean Dubuffet. A pale-green luna moth in the center of the round painting stands out among the other muted anonymous specimens and is heartbreakingly lovely — especially if you know that this ephemeral, nocturnal creature lives fewer than seven days.

There is a memorial aspect to everything in the room. Already Forgotten/Never Remembered, a pair of oils on panel, personifies the inaccessibility of the past with views of a ghostly attic window and a beneath-the-floor corridor to nowhere.

In The Last Breath, plucked chicken feathers crowd a glass vitrine framed in painted pink wood. Though Huckaby says it represents suffocation, it still manages to say something lovely about what was and is no longer — even if what was might be breath or hens headed for the frying pan. When pressed for a theme at his artist talk, he pointed to the prevalence in the work of the “missing horse.” Though there are several intimations of an absent horse — an empty saddle, the assemblages made from old leather and a riding crop, the horse skeleton in Thomas Butler and the almost-horse of Lemuel Sprague/les Mule Prague, both oils on panel — the idea felt attributed after the fact and tongue in cheek.

Brer Cthulhu, a mixed-media sculpture in one corner of the room, proved key to understanding this show. A small hybrid creature, half lizard, half Brer Rabbit, sits atop a bed of red clay, much like a William Christenberry sculpture. It is an apparent fusion of Brer Rabbit, the African trickster figure adopted by African American slaves (later made famous by Joel Chandler Harris), and the evil Cthulhu, H. P. Lovecraft’s nightmarish creature, part man, octopus and dragon. The piece is Huckaby’s hint that he, too, is a trickster.

This artist takes things you think you know and shows them to you in entirely new ways, bringing up associations you never knew existed. Anhydjinnic Molassicism, then, is also an exhibition about possibility. His act of creation is part salvage, part repurposing, and an always surprising fusion of one thing with or into another.