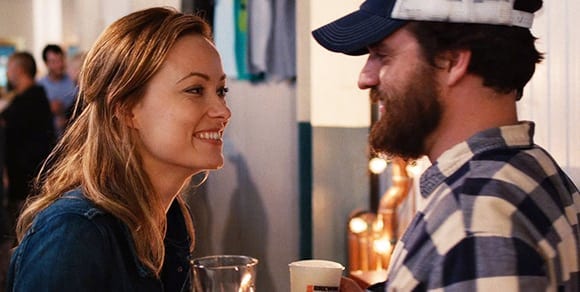 Except for that whole knock-down-gorgeous part, Kate (Olivia Wilde) is just one of the guys. In fact, in the smart, engaging “Drinking Buddies,” she’s the only non-guy at a Chicago craft brewery, where she works as PR gal and factotum to a genial but maddeningly vague boss (Jason Sudeikis). She’s best pals with brewer Luke (Jake Johnson), the guy she has lunch with every day in the break room — only lunch always turns into something more like a raucous food fight.

Kate and Luke finish each other’s sentences, tease each other mercilessly and get lit every night over the pool table at their favorite bar. Their bond is so friendly-flirty that it’s almost a surprise when we see these seeming soul mates part ways at the pub door … and go home to different significant others.

His is Jill (Anna Kendrick), a special education teacher he’s been with since she was 21. Marriage is inevitable; they just don’t talk about it. It’s a Catch-22 thing: they’ll start making the wedding arrangements when they have some free time, but they won’t ever have enough free time, because arranging a wedding is such a huge deal.

Kate’s boyfriend is the older Chris (Ron Livingston, having a good summer with this and “The Conjuring”). As quietly introspective as Kate and Luke are nonstop quippers, he jokes self-awarely that his emotional reserve puts him somewhere on the Asperger’s syndrome spectrum. Like Kate’s co-workers, he himself wonders what he’s doing with a young live wire like her, though of course you can’t help thinking, hey, maybe he’s exactly the sort of guy she needs, as ballast.

Filling in Kate about his day at the recording studio where he works, Chris tells her about a rowdy young band that booked a session, featuring a girl playing a cello. “I think that’s supposed to be ironic,” he says, “but I can’t tell any more.”

It’s a smart line in a movie that lets its characters revel in their own ironic jokes and hipster games. But ultimately the film winds up playing for keeps, showing sincere respect toward all of them. (This may be the movie that lets writer-director Joe Swanberg get out from under that “mumblecore” ID he’s been saddled with for years.)

Much of “Drinking Buddies” feels like a slow burn as we wonder when everybody will realize that Kate and Luke are made for each other. A weekend that the four spend together at Chris’s beach house on one of the Great Lakes is an exercise in quiet suspense as Chris and Jill go hiking in the woods while Luke and Kate stay back, tipsily playing blackjack.

The filmmakers know we’ve seen too many formulaic things that call themselves romantic comedies. “Drinking Buddies” looks, from a distance, like one of those, just with a raggedy indie edge. But it is less diagrammatic than that. Just as soon as we think we’ve got a character pegged, each proves capable of surprise. There’s something classically European in this movie’s low-key but acute character observations. And it allows each actor to shake loose from any preconceived ideas we may have about them, too.

While making the movie, they were free to improvise, working from Swanberg’s script outline. That explains the spontaneity and truthfulness of the scenes; that’s a lot harder to pull off than it might seem. All four actors are terrific, keeping firm hold on their characters while taking advantage of their on-screen freedom. Wilde is the standout and the surprise, embodying a seeming drink-you-under-the-table free spirit whose energy may mask a baseline of deep loneliness. (There’s a reason Chris gives Kate a copy of John Updike’s “Rabbit, Run,” telling her that the hero, impulsive Harry Angstrom, reminds him of her.)

Everybody is strong, Kendrick especially deepening her repertoire of sensitive, smart but borderline panicked women. “Drinking Buddies” feels very much like a labor of love, in which everyone is working out of the same aesthetic. Adding to that feeling is the involvement of indie director Ti West, best known for his swell 1970s horror homage  “House of the Devil,” playing one of Kate’s and Luke’s brewery colleagues, and Swanberg gives himself a cameo as an angry driver.

One footnote: the folks in “Drinking Buddies” drink nonstop. Seriously, nonstop. If you’re a beer lover, you’ll love it. Anyone else with alcohol issues, you may want to stay far away.