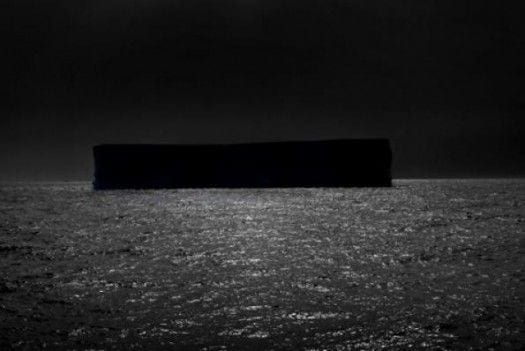 Review: In Whitespace’s “From Cosmology to Neurology,” images converse amid an ocean of ideas Whitespace has become a full and empty universe, cosmologically dark and neurologically vast, courtesy of its current exhibition, “From Cosmology to Neurology and Back Again.” Jerry Cullum’s curatorial assemblage of more than 60 works by 22 artists, on view through August 4, is a viral network of ideas that multiply and reinforce the curator’s diverse interests.

Cullum has created a curious visual and intellectual experience. Viewers adrift in the flotsam of images in this ocean of thought will see perils as well as luminescent plankton dancing before their eyes.

The placement of the artworks is key. Cullum sends the viewer migrating and bouncing around sympathetic imagery. In fact, the conversation among the works here is more the artwork than any individual piece.

Karley Sullivan's drawings of the moons of Saturn

The exhibition begins with Karley Sullivan’s scratchboard drawings. At first glance these images appear to be repetitive studies of rocks or meteorites. But these simple drawings are actually renderings of Saturn’s moons. As optical analysis has improved, we are discovering more and more about our solar system and the cosmos. The rings of Saturn hold debris fields of objects, and the moons are agglomerations of methane ice and rock circling the gaseous planet. Sullivan has personalized them in a delicate way.

The QR codes of Henry Detweiler’s “#manymoons,” hung salon-style in the second gallery, send the viewer “back again” to Sullivan’s drawings. This ironic “meta” reference bespeaks the notion of memory and consequentially forgetfulness; we travel everywhere and nowhere through our minds.

This careful juxtaposition is also evident in another group of works in the first gallery. The tessellated graphite line drawings of Ann Stewart’s “Assumptions and Proposition” are that of a mind’s meandering. They are paired with Julianne Trew’s “Photodisintegration,” inky imagined seed pods suspended in complete blackness.

A mass of small white scratches on a chalkboard, like dandelions blown in a dark wind, make up Bethany Collins’ “Whitenoise Series.” The marks are actually letters repeating the sentence “Do people ever think you’re white.” The disintegrating mental landscape suggested by this minimal tome speaks to Julie Sims’ photograph across the gallery. “Eruptive Fissure, Hippocampal Subfields” depicts a sculpture she has made to represent the mountainous terrain of the brain. A red line suggests a thought, or perhaps a stroke.

Overall, the exhibition reinforces the notion that humanity is weakened and bowed against the extremes of nature. Todd Murphy’s dark photograph “Narrow Road to the Far South #23” is an image of a looming iceberg. He has solarized the angry physical presence of distant gloom — a metaphor for global warming.

Seana Reilly has mastered granularity. Time pours from her work like sand in an hourglass. The sonic imagery of “FractureGradient” hints at our oil-thirsty upheaval of geology. In another image, Reilly’s liquid graphite smothers the canvas, echoing the carbon footprint of a planet deprived of oxygen.

Marcia Vaitsman’s nearby image, “Giant Waves #5,” might seem an abstraction. It’s a photograph of a video still of the Japanese tsunami. Its pixilated grayness hints at the devastation and subsequent radioactive release from the Fukushima reactors: our peril is natural and man-made.

Chelsea Raflo presents “Displacement,” an animated video that depicts a little girl opening doors and peering out windows at forming molecular structures. Is she witnessing disintegration, some atomic bombardment or the awareness that we are all just molecules?

Beth Lilly’s “The Story is Trying to Tell The Story” is a photo of the artist holding a note to herself. She has written another note beneath the image of the note trying to explain the note and reason to take note of the note.

This is humorous but also echoes how the brain functions. Neurologically, memories are repeated thoughts through the microscopic lens of time. They are our stories, and the curator has woven them together throughout the exhibit.

Whitespace, one of Atlanta’s boutique cultural hubs, brought in four Brazilian artists to contribute to the show. Installed in a garden, Rachel Rosalen’s and Rafael Marchetti’s “Hydrophiletic-Z” is a series of plastic tubes, pumps and speakers controlled by an electronic “brain.” The sound of water swishing through the tubes and exterior noises combine in the suspended tubes, creating a neural network writ large and fragile.

Sissi Fonseca’s opening-night performance, “Placebo,” expressed the notion that ritual is a balm for the starved condition of our collective soul. Hugo Fortes’ video, “Evolutions in Three Lessons,” traces the migratory path of Charles Darwin and the dire consequences for indigenous peoples in colonialist conquest. The video asks, “Who are the savages?” The imagery of seals and cormorants trapped on an island becomes a metaphor for overcrowding, loss of habitat and the need for migration.

The physical universe is both vast and minute, and this exhibition offers both extremes, sometimes in one piece. In “Aude Sapere” (“Dare to Know”), an 11-foot painting on translucent mylar, Harris Dimitropoulos smears colorful ink to the point of transparency to create imagery that replicates the molecular attenuation in the scientific process of gas chromatography.

The exhibit reminds us that the mind is the cosmos. The vessel of our body is trapped and freed by our ability to process and imagine beyond the physical.

Cullum has “dared to know” a lot about how art becomes a touchstone for the larger human systems of history, philosophy, science and religion. The exhibition, which reflects the breadth of his eccentric scholarship on arcane subjects, enjoins the viewer to share his intellectual quest to find out why random visual things link together the way they do.

Evan Levy is an Atlanta artist. Jerry Cullum and Karley Sullivan are contributors to ArtsATL.com.