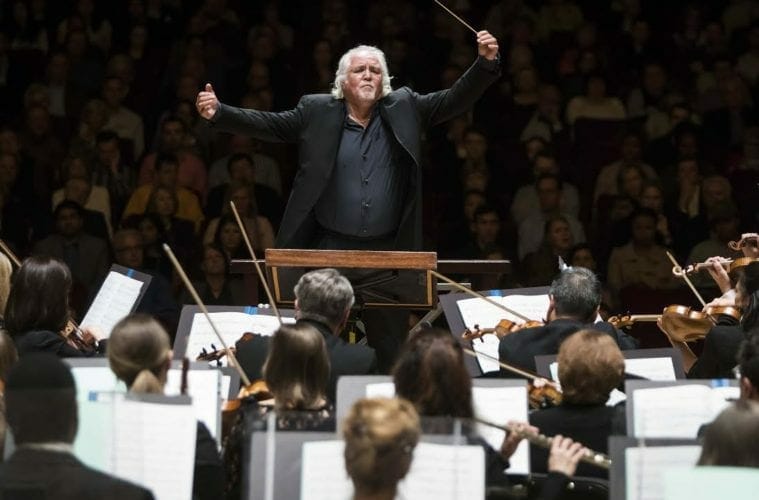 Review: Donald Runnicles and the ASO conjure up a nuanced romanticism

The concert had been scheduled for October 31 since the season was announced, but ASO planners somehow did not anticipate Halloween traffic and scheduling conflicts and cancelled that show, leaving only one performance of the program on Saturday, November 2.

The evening’s soloist was Kelley O’Connor, an American mezzo-soprano and Atlanta favorite known for her performances of contemporary composers such as the Argentine Osvaldo Golijov. O’Connor has appeared in no fewer than three recordings issued by the ASO.

Wagner’s opera, Parsifal, continues his fascination with the Holy Grail and ideas of self-renunciation and compassion. From it, the ASO programmed the Prelude to Act I, which sets the listener in a forest near the home of the Grail. Next, “Good Friday Spell” from Act III depicts the revival of nature in springtime and far in the future of Act I. Runnicles’ direction set the right tone for the evening — relaxed, engaged and gracious throughout. In the Prelude, he evoked an elevated, religious atmosphere with intense string vibrato, long, patient lyrical lines and constant suggestions of motion between different chords and their tone colors.

The first brass chorale was weak and underplayed, but Runnicles exhorted them to greater effort, insisting on a full, rounded sound throughout the entire Prelude. His insistence on high performing standards and on a vibrant balance of sound saw benefits as the evening progressed. “Good Friday Spell” was much more animated than the Act I Prelude, alternating between turbulent and serene. The serene moments explored sensitive, often very soft gestures. Here, the ASO winds as usual were outstanding, in particular the English horn solo as played by Emily Brebach.

The Op. 14 Lieder by Korngold (translated as “Songs of Farewell”) are somewhat underappreciated today but should join the classical canon alongside orchestral Lieder by Mahler and Strauss. Korngold is known for his highly chromatic, lush style and for rich, Strauss-like orchestrations; unfortunately, in later years, he was largely disdained for his move into film composition. (He was the first internationally known composer to sign a contract with a film studio, for Captain Blood in 1935.)

The first song of the set, “Sterbelied” (or “Requiem”) is a nihilistic view on death from the view of the deceased, brooding that they and their lover might forget each other. The second addresses romantic longing, where the other person has vanished into obscurity beyond the knowledge of the protagonist. In both songs, despite appearing relaxed, O’Connor’s performance was dry and not emotive, her vibrato surprisingly tight and tense and her mouth (surprisingly) nearly closed. This dry approach missed opportunities in the second song to highlight vivid images that begged for expressive treatment: the sun, evening ponds, rain, fate and darkness. (Her enunciation of the text, however, was uniformly crisp.)

O’Connor’s degree of emotional involvement improved in the last two songs. “Mond, so gehst du wieder auf” (“Moon, thus you rise once more”) is an appeal to the moon to teach the protagonist how not to suffer over a romantic separation. Here, O’Connor found her footing in her rich lower register and the subtle, low dynamics in the orchestra, so that the heady blend of pain and prayer in the text was fully evident. The fourth song is a nostalgic appeal to enjoy love in the present even though the protagonist is leaving (for some unknown reason). O’Connor’s interpretation mixed humor with mature, knowing introspection. Overall, though, O’Connor’s performance of all four songs could have used a more lush, relaxed tone, a greater dynamic range and greater passion.

In the concert’s second half, Bruckner’s Fourth Symphony (nicknamed the “Romantic” by the composer) has the claim to fame of being his most continually revised work — what is called the “Bruckner Problem.” Despite existing in versions from 1874 and 1888 — among others — the ASO, like most other orchestras, performs the 1880 Haas edition. The work has tantalizing hints at an extramusical program: Bruckner wrote to the conductor Hermann Levi in 1884 that its movements included an announcement of the day in the horn (first), a song (second), a hunting trio (third) and a musical entertainment of hunters in the wood (fourth), although in later years, he noted that he forgot (!) his initial programmatic intent in the last movement.

Bruckner’s Fourth, like his other symphonies, has brass-heavy, organ-like sonorities but can bore audiences at times with its static textural blocks and long-winded patterns. (The third movement’s pulsing energy, balanced against its repetitions of themes and chords, makes it perhaps the most effective among the others.) A successful interpretation, such as this 1973 recording of Karl Böhm leading the Vienna Philharmonic, demands a mixture of restraint from the conductor as well as pure, elemental intensity and vivid, almost overplayed contrasts. In last night’s performance, Runnicles and the ASO achieved all of these desired goals.

Despite a couple of early sloppy moments, the heroic, sunrise-like first movement featured effective contrasts, a slightly faster tempo than other versions and powerful, full brass chorales. In the tragic, funereal second movement, Runnicles pushed the ASO to explore the soft end of the dynamic spectrum, suggesting an introspective but pained meditation. The boisterous third movement, a hunt-infused scherzo, featured a breakneck tempo and jarring contrasts between instrument families. Here in particular, Runnicles’ emphasis on full sonority and pure force was effective. Lastly, the finale was fateful, stormy and tense and performed with an admirable mixture of force and nuance. By its end, the sheer quantity of musical repetition brings one to a more spiritual focus on pure musical elements: rhythm, dynamics, timbre and harmony. Overall, Runnicles and the ASO kept the audience’s attention throughout this sometimes long-winded but frequently inspired work.

With his insistence on improving the level of artistry from the ASO, Runnicles made a strong case to succeed outgoing Music Director Robert Spano. For two decades, Atlanta audiences have anticipated Runnicles concerts for their consistent quality, sense of fun and, most of all, his passion for the music. He was a top candidate in 2000, the last time the music directorship was open. With Spano leaving the post in 2021, Runnicles should merit serious consideration. He returns to the podium on November 7 and 9 with Grammy-award winning violinist James Ehnes.