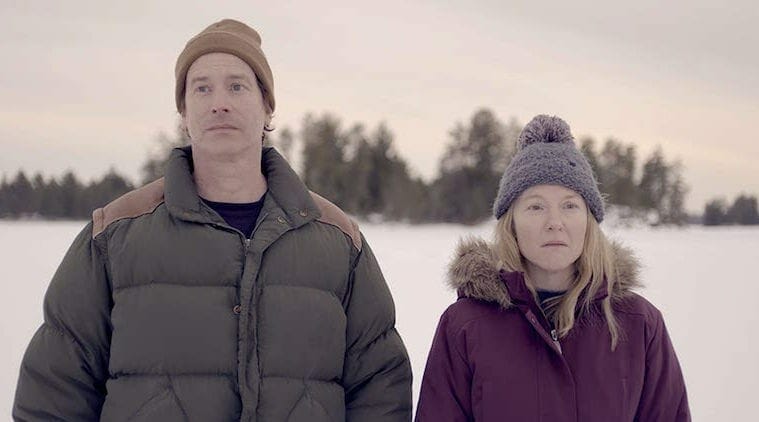 Rob Huebel plays a sad-sack comic named Tim. Rachael Harris plays a lonely mother of two. They meet at the hotel where she works and he's supposed to tell jokes. (Photo by Outskirt Media)

Review: Dark comedy “International Falls” will simply, emotionally sneak up on you

A lonely mother of two meets a down-on-his luck comic. That’s the premise of International Falls, which, with its snowy, small-town Minnesota setting and thick accents, makes you expect the worst sort of quirky, indie film indulgence. So here’s some good news when we need it. The film, directed by soon-to-be Atlantan Amber McGinnis and written by Thomas Ward, is a great showcase for its lead actors and has an emotional impact that sneaks up on you. McGinnis is married to Matt Torney, Theatrical Outfit’s incoming artistic director. Ward, a screenwriter, playwright and actor, has returned to Atlanta after time in Minnesota and Texas. International Falls screened at the 2019 Atlanta Film Festival and has made the festival circuit, earning six grand jury prizes. It recently became available to streaming rentals.

The dramedy introduces us to Dee (Rachael Harris), a hotel worker chatting at the reception desk with younger colleague Ruthie (Jessie Sherman), who gives her the book How to Be a Comic. Ruthie knows that comedy is Dee’s quiet dream — something of her own besides her two tween daughters and marriage to the sweet but deeply boring Gary (Matthew Glave).

At that moment, and not exactly the answer to anyone’s prayers, the comedian booked to play two nights at the hotel bar blows through the lobby door shouting, “It’s cold as f***!” (International Falls, a real town, is in fact nicknamed “the Icebox of the Nation.”)

The comic, named Tim (Rob Huebel), is a middle-aged guy who’s been traveling small-change comedy circuits for years, earning a living but never gaining traction. “You’ve got a real Steve Guttenberg thing going on,” Dee says upon meeting him, and he replies, “Wow, you’re old.” It’s the sort of mildly smart-ass exchange that will define how they interact, and Harris and Huebel have a lovely, unforced rapport.

Back home, Tim has some domestic problems. So does Dee, who suspects her husband is cheating. These two strangers don’t know about each other’s marital problems at first, and what attracts them isn’t chemical. Frankly, it’s Tim’s connection to the comedy scene that draws Dee, after his so-so set that night, to his awful hotel room. Dee (Rachael Harris) and Tim (Rob Huebel) take in one of the few landmarks in International Falls, a real Minnesota city with a population of 6,424. It sits just across the border from Ontario, Canada. (Photo by Outskirt Media)

It’s sort of the opposite of a meet-cute. The movie is refreshingly nonjudgmental as it shows us two people who connect because they’re each in crisis. They’re alone, tired, questioning — and, with each other, they don’t have to pretend to be anything they aren’t. That’s the connection. “You’re really sad, aren’t you?” Dee says, deep in the movie. He replies, “I’m just tired of pretending that I’m not.”

International Falls follows these two for the two nights and change he’s booked at the hotel. She shows him the sights. Despite its name, the town has no scenic waterfalls. It does have a giant public statue of Smokey Bear, which they spend the requisite time gazing up at. (The kitsch factor, happily, is not belabored.) To some extent, though it has a more leisurely timeline and more characters, International Falls is a bit reminiscent of Richard Linklater’s Before Sunrise series. It’s mainly about two people discussing their problems and ideas and learning about each other. It’s not a romantic comedy, per se. And it isn’t afraid to tiptoe to the edge of despair, and possibly past it.

Unlike Amazon Prime’s tightly wound, visually lavish The Talented Mrs. Maisel (which, like so many, I love), International Falls focuses on the realistic, drab loneliness of a standup comic’s life. Huebel is really good showing us the sweaty desperation of a man trying to work a half-filled room of indifferent people, who are mainly there for the booze. It’s not a surprise when he turns them into his own comic targets. But if International Falls shows the psychological neediness and hunger that can attend a standup comic’s work, the movie also affirms the value of comedy for someone like Dee as a way to understand and express her life.

I don’t want to oversell it. The film takes a couple of missteps. The first comes near the end, just after its emotional climax: SNL and Weeds alum Kevin Nealon turns up as a cop; his too-familiar face disrupts the mood. (Character actress Mindy Sterling also shows up as the town’s chatty liquor store cashier, but you won’t realize she’s the same woman who played Frau Farbissina in the Austin Powers movies.) Another problem? Eric Shimelonis’ sensitive, piano-based score is nice enough. There’s just too much of it.

Small quibbles. The film is the kind of character study they don’t make much any more, probably because so many were not as nicely and modestly made. It ends with just a perfect, final word: “Try.” It’s worth your time to watch and find out why.